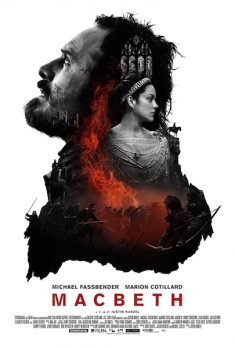 Macbeth is my favourite Shakespeare play. Not that I’m a great scholar of the Bard, but I’ve seen and/or read enough to have a favourite. I also think it’s one of his most accessible works: its story and characters are relatively straightforward without being devoid of complexity; it’s got some immensely effective imagery and dialogue, including a solid compliment of famous lines; and it’s not excessively long either (it’s Shakespeare’s shortest tragedy, in fact). I also studied it twice over in secondary school, so I know it fairly well. Now, this doesn’t mean I have exacting standards when it comes to film adaptations (Shakespeare is plenty open to interpretation), but it does mean I have my expectations up, especially as there isn’t a film version of Macbeth that could reasonably be described as “definitive” (though I know Polanski’s has its fans). After this latest effort, that’s still the case — but that doesn’t mean it’s without merit. Far from it.

For thems that don’t know, Macbeth is set in 11th Century Scotland, where the eponymous character (Michael Fassbender) is a lord and general in the army of King Duncan (David Thewlis). After winning a decisive battle, Macbeth and his BFF Banquo (Paddy Considine) bump into a coven of witches, who forecast Macbeth will receive a new title and eventually become king. Although the men are naturally dubious, they soon learn that Macbeth has indeed been granted the prophesied thaneship. With the prospect of being king too tantalising to ignore, Macbeth’s ambitious spouse (Marion Cotillard) eggs him on to plot regicide…

Although director Justin Kurzel (of Snowtown, a film I have no intention of watching thanks to ghost of 82’s review) wasn’t hired until after the film was in development and Fassbender had been cast, the final film has been very much guided by his vision. The text is heavily cut (a copy & paste & delete-bits job that somehow took three screenwriters), to the displeasure of some critics, though this is primarily because Kurzel chose to supplant some of the dialogue with Filmmaking. In a film?! How very dare he! 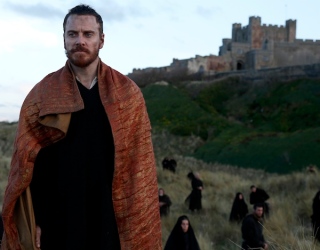 What I mean, more specifically, is that he’s visualised parts of the text; applied the old rule of “show don’t tell”. So rather than a messenger giving the King a full account of Macbeth being awesome in battle, we see some of the combat; Banquo has hardly any lines early on, but we still understand his friendship with Macbeth just from the way they look at one another and go into battle together.

Throughout, it’s the imagery that Kurzel and DoP Adam Arkapaw have crafted that’s the real standout of this particular adaptation (however good the cast are, and I’ll come to them). The compositions, the unusual use of almost tableaux-like blocking, the lighting, the colour palettes, the rhythm of the editing and the use of slow-mo… This is a highly filmic film, in a good way. At times, it manages to turn Shakespeare into an action movie, a feat rarely (if ever) accomplished previously. At others, it’s just mighty purdy. The pictures are well complemented by the score, composed by the director’s younger brother, Jed Kurzel (he’s also scored the likes of The Babadook and Slow West, so it’s not just nepotism). His work here is appropriately haunting and folksy.

To say the text has been cut and the film is strongest in its visuals does not mean this is an empty-headed version of Shakespeare, however. The director and his cast have some interesting variations on the usual depictions of the characters, in particular Lady Macbeth’s motivations. Normally shown as greedy and power-mad, here she is grief-stricken — there’s a single line in the play that’s interpretable as the Macbeths having lost a child, which here is both made explicit and highlighted in an opening funeral scene. These characters are acting out of some kind of desperation or emptiness rather than pure greed. When, later, she (spoiler!) goes mad, it’s subtle and sad, rather than frantic and delirious.

Cotillard is fantastic in all of this, and certainly worked hard for it: the way the French language applies emphasis is not suited to delivering iambic pentameter, apparently, so she worked hard with a dialect coach to nail her delivery. Her accent clearly marks Lady Macbeth as the only non-Scottish character here, which becomes another layer added to this interpretation.

As Macbeth, Fassbender negotiates well the accomplished general who is also dominated by his wife. Here the guiding concept was Macbeth The Warrior; to portray him both as someone looking to replace what he’s lost by the battle being over, and as suffering from PTSD after what he’s witnessed, hence repeated hallucinations of a boy killed in battle. This isn’t out of place with the text, of course — “is this a dagger I see before me” and all that. Fassbender is on furious form, particularly as Macbeth gives in to his paranoia later on. A word too for the supporting cast, in particular Sean Harris as Macduff, who makes the character feel more essential to the story (as he should, considering the climax) than I remember him being in previous versions.

Some of this analysis is thanks to the short handful of featurettes found on the UK Blu-ray (the US release, out tomorrow, has different special features, so I’ve no idea what the overlap will be, if any). There’s no commentary track, which is a real shame. I don’t often get round to listening to them, but I’d be interested to hear Kurzel talk through his and his cast’s decisions on a scene-by-scene basis. The special features that there are give some insight into how thoroughly they thought through their adaptation and prepared for it, but that only means the lack of further insight is even more pronounced. And Kurzel, Fassbender, Cotillard, and Arkapaw are all now working on the film of Assassin’s Creed, out this December, which is an intriguing prospect — is it going to be an arthouse video game adaptation? I suspect not, but maybe it will be the rarest thing in cinematic history:

a good film based on a computer game.

I was initially on the fence about whether this Macbeth was a 4-star or a 5-star achievement, especially as I maintain it’s not the be-all-and-end-all of Macbeth on screen. But it’s one of those films that, whatever the experience of actually sitting and watching it is like (at times: odd), its imagery and feel really stay with you.

Macbeth is released on DVD and Blu-ray in the US tomorrow, and is out in the UK already.
Next month, Polanski’s Macbeth is one of the initial releases in Criterion’s new UK range (yay!)