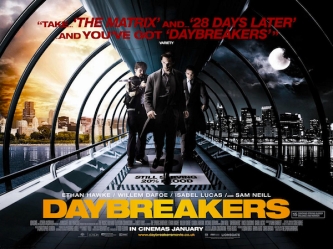 Most of mankind have become vampires, but the blood supply is running out and without it people mutate into monsters. Ethan Hawke’s scientist is developing a substitute, but when he encounters human resistance fighters he learns there may actually be a cure…

Made by the guys behind Predestination, Daybreakers offers an original and imaginative world (how would mankind cope if we couldn’t go out in daylight? Maybe like this). It’s somewhat let down by a few campy performances and a sensibility that reverts to action sequences, but originality counts for a lot, especially for genre fans looking for something different.

* The distributor chose to make six seconds of cuts to get a 15 in cinemas. The uncut 18-rated version was released on DVD and Blu-ray. No idea which version is available through Channel 5, where I watched it. ^