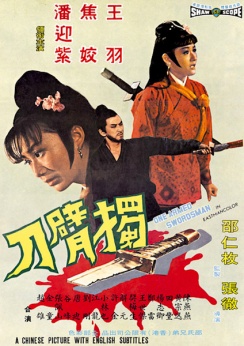 After martial arts student Fang Cheng is killed protecting his master, the latter takes in Cheng’s infant son, Fang Kang, as his student. Years later, Fang Kang is bullied by his aristocratic classmates and treated as a servant by the master’s daughter, Pei, though he’s a better student than any of them. Eventually goaded into leaving, his fellows corner him, challenge him, accidentally lop off his sword arm, and leave him for dead. Kids, eh? Fortunately, Kang is found by orphan Xiao Man, who nurses him back to health. With the help of an old textbook, he learns to fight left-handed, which is handy because there’s a conspiracy underway to kill all of his master’s former pupils…

One-Armed Swordsman is a relatively early and defining entry in the martial arts genre — it inspired countless “one-armed” imitators, not to mention numerous sequels and remakes starring the titular hero (he even crossed over into the Zatoichi series, which obviously I’ll get to one day). Being so early and formative, it apparently plays as quite rote and clichéd to anyone very familiar with the genre, though of course it was establishing those clichés rather than succumbing to them. As a relative kung fu neophyte, however, such elements are much less troubling. Sure, there are plot points that are recognisable from other movies, but that’s genre — any genre — for you.

Besides, as is the case with most works that inspired many imitators, there’s a reason they provoked copycats, and that’s because they’re darned good in themselves. One-Armed Swordsman is not a fight-a-minute actioner like some of its genre stablemates, but it doesn’t need to be. When action does explode onto the screen, it’s fantastically done, with a fair few smaller tussles along the way before it reaches an almighty climax. Nothing innovative in that kind of structure, of course, but the bouts are all well choreographed and performed, and the villain’s “sword lock” weapon is a neat touch. 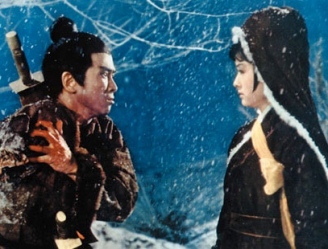 However, for me the film also worked very well as a drama, and even sometimes as a romantic drama. Fang Kang is an interesting protagonist. His lifestyle is torn from him, and rather than simplistically train to regain it or give up entirely, he battles with that decision. He returns to that way of life only to defend himself and his rescuer, and then out of a sense of loyalty to the master who raised him, but he’s also prepared to abandon the martial life to be a farmer… when the job is done, naturally. Jimmy Wang Yu, in a star-making turn, sells this character arc as well as anyone in a kung fu picture ever has. He’s also (somewhat) torn between two women, the kindly and supportive Xiao Man, and brat-with-a-heart Pei. While no one could truthfully call this a romantic picture, the love-triangle aspect also functions surprisingly well.

Another joy is the dialogue — though that may be accidental, because who can say how much of it was in the original script and how much in the particular set of subtitles I watched. And naturally I can only speak of the copy I watched, which was riddled with spelling and grammar errors, so I can’t guarantee you’ll find the same enjoyment from a more (shall we say) legal edition. Nonetheless, I submitted a handful of my favourite moments to IMDb’s quote section, so you too can revel in the offhand way everyone keeps referring to the minor infraction of cutting someone’s bloomin’ arm off.

In my previous reviews of Shaw Brothers movies (like The 36th Chamber of Shaolin) I’ve mentioned their positions on “greatest kung fu movies”-type lists (and that’ll come up again next week when I review Five Deadly Venoms). One-Armed Swordsman doesn’t seem to feature on those as often, nor chart as highly when it does. 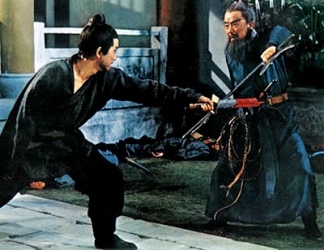 I disagree with that. Perhaps those lists are based on the abundance of action in these films, by which metric this probably has too much drama — though, as I said, it’s not devoid of fisticuffs and swordplay. Combine that with a solid story, engaging characters, and a brisk pace (even with its near-two-hour running time), and you have one of my favourite Shaw Brothers movies I’ve yet seen.