Some say The Five Venoms is one of the very best martial arts films ever made. Some say it’s the best. I’m afraid I have to disagree. Strongly.

It begins with a daft premise: a student is instructed to find five former pupils and a teacher, but he doesn’t know their names or where they went. All he knows is their fighting styles, which they will use in an emergency, and that the ex-teacher is rich. Presumably he therefore had to scour the entire country watching everyone fight until he stumbled on the right guys. Oh, and there’s a time limit because the pupils may go after the teacher’s money… though how the chap who’s setting this mission is supposed to know they haven’t already, I don’t know.

So the plot is a non-starter, but we don’t watch kung fu movies for the plot. Unfortunately, The Five Venoms seems to think we do, because action is actually in short supply. When a decent slab of it does arrive, in the form of a five-way fight for the climax, it’s somehow boring. Before then there’s bouts of torture and plain violence, and while the blood is as fake as ever, the style is cold and gruesome. The only really good bits come from the characters’ imagination: there’s the opening scene, with flashback demonstrations of everyone’s powers, in comic-book-gaudy colours; and later, the student teams up with one of the ex-pupils to plan and prepare, and as they practice we see the villains appear through their imagination.

I’m not sure what people see here to call it one of the greatest martial arts movies ever. The establishment of the Five Venoms and their styles, all of that mythology, seems to be a big thing for some people. 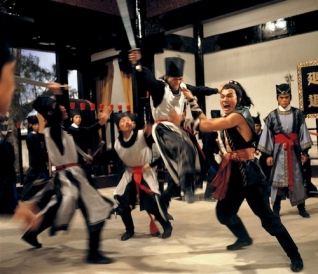 I keep reading things like “the concept of the five Venom styles is simply amazing”, or that “the mythology alone is exquisite”, but I just don’t buy it. There’s nothing wrong with it — it’s a decent setup — but to call it a “mythology” is bordering on grandiose. And whether it’s a full-blown mythology or just a high-concept setup, either way it’s not that incredibly mind-blowing a concept.

The hype means that The Five Venoms is a disappointment — cheesy, convoluted, sometimes nonsensical, lacking in action, and, worst of all, often dull.

The Five Venoms is on Film4 tonight at 11:10pm as part of their Revenge of Martial Arts Gold season.