These days, Steven Spielberg is as well-known for his Oscar-worthy historical prestige pictures as he is for his action-adventure genre movies, so it’s kinda strange (at least for me) to imagine the time in his career at which this film came about. I mean, it’s an adaptation of a controversial literary novel about the miserable lives of black women in the American South during the early decades of the 20th Century, directed by the white guy known for Jaws, Close Encounters, E.T., Raiders of the Lost Ark, and Temple of Doom. To give it a modern frame of reference, it must’ve been a bit like if Zack Snyder had made Precious.

Beginning in 1909, the film tells the life story of Celie, played as a teen by Desreta Jackson and as a woman by Whoopi Goldberg, in her debut role. She’s surprisingly good, actually — often understated, doing a lot with just her eyes. Anyway, over the next 28 years Celie is systematically abused and downtrodden, first by her father, then by her husband Albert (Danny Glover) and his unruly kids from a previous marriage. Her beloved sister Nettie (Akosua Busia) disappears, never to be heard from, despite a promise to write. Various characters and their subplots weave in and out of Celie’s life, like Sofia (Oprah Winfrey), a strong-willed woman who one day slaps a white man and suffers for it; and jazz singer Shug Avery (Margaret Avery), the object of Albert’s affections, who eventually helps Celie find greater independence.

If it all sounds a bit grim then, well, it is. I’m sure it can’t’ve been a great time or place to be a black person (though any suffering at the hands of white folk doesn’t play into this particular narrative too much, aside from Sofia’s storyline), nor is it exactly the greatest period to have been a woman, so put the two together… Yet because it’s a Spielberg film, 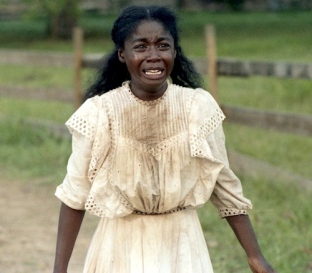 it never quite feels like we’re getting the full force of the story’s brutality. That’s a mixed blessing: as a viewer, we’re spared all the horrors you can infer from what actually happens; at the same time, how much should a story about such horrors be sparing us from them? Though as it was at one point advertised with the tagline, “Remember how good it made you feel… See it again.”, someone clearly thought it was meant to be a feel-good movie.

Nonetheless, the lack of gritty realism isn’t just Spielberg’s fault, I don’t think, but also the era of filmmaking. These days I imagine such a story wound make for a much grittier movie, like the aforementioned Precious, or 12 Years a Slave, but this comes from a ‘prettier’ time. Look at something like Once Upon a Time in America, released the year before: it’s a film about violent crime and associated dark deeds, but it’s also an historical prestige movie, tinged with nostalgia. There’s not a whole lot of nostalgia in The Color Purple, but there’s something of a similar tone.

That said, Spielberg’s handling of tone here is certainly not as accomplished as Sergio Leone’s in Once Upon a Time. The really grim stuff rubs up against slapstick comedy, and Spielberg’s patented sentimentality is unleashed in undiluted force in a final act where everything comes up roses, and even some of the grim stuff from earlier is retrospectively re-written (some of that is a fault inherited from Alice Walker’s novel, of course). It’s also far too long, in need of a good streamlining rather than losing any one part in particular. Famously, it’s the only Spielberg film not scored by John Williams (until he was too ill to do Bridge of Spies). Ironic, then, that Quincy Jones’ score often sounds quite Williams-y, particularly one motif that constantly feels like it’s going to evolve into the Jurassic Park theme.

Spielberg’s first foray into Serious filmmaking is a long way from being an unqualified success, but it’s not a bad movie either, and at least it was the gateway to him making some superior dramas. Bonus points, too, for a mainstream big name director tackling a story about the historical lives of black women — depressingly, that still feels like it would be a noteworthy move 30 years later.