“Tom Hardy goes for a drive and makes some phone calls” is the plot of this film, which is often mislabelled as a thriller. That’s not to degrade its thrillingness, but rather to say that if you’re expecting a single-location single-character phone-based thrill-ride like Phone Booth (which I love) or Buried (which I’ve still not seen), you’re not going to get it. In reality, Locke is a drama about a man dealing with some woes that are both everyday and life-changing, but as a film it’s been made in an unusual and interesting manner.

To be more specific, the story concerns Ivan Locke (Hardy), the foreman on a huge construction site in Birmingham, and the only character on screen for the film’s entire running time. As he leaves work one evening, he’s stopped at some traffic lights. He indicates left… but, given some time to think about it, turns right. (Shades of Doctor Who season four there, but I don’t think it’s deliberate!) As he drives down the motorway for the next couple of hours, he makes a series of phone calls that completely change his life.

I could give you some indication of what those calls are about, but I think the less you know, the more entertaining it will be. As writer-director Steven Knight (Eastern Promises, Hummingbird, Peaky Blinders) says in his audio commentary, part of the idea was to construct a movie where the lead character’s big decision — which usually comes near the end — actually occurs at the start, and the whole movie deals with the repercussions of that. Locke deciding to turn right rather than left isn’t just a decision about the quickest route to his destination, but about heading to a different destination,

and in the process turning his life upside down. Another part was to tell a story about an ordinary guy dealing with events that aren’t going to change the world, aren’t even going to make the papers, but are a big deal in his life. Something like this could happen to any of us, and how would we deal with it?

I’d argue that Locke is Tom Hardy’s most unusual role to date: a total everyman. I mean, unusual for him. As such, it’s probably the best demonstration of his genuine acting ability: he’s got psychos and outré characters down pat, but playing an understated, fundamentally good, normal bloke? That’s a big change of pace. What’s so remarkable about Ivan Locke is his sheer unremarkableness. He’s a softly spoken guy, a friendly guy, a nice guy; as we learn at one point, he’s the only contractor who’s ever submitted paperwork to the council not just on time but early — he’s that kind of guy. And on this night, he’s decided to be completely honest with everyone; honest to a fault, in fact, because sometimes it just makes things worse. As Knight says in that commentary, what happens to Ivan is “an ordinary tragedy, and Ivan’s solution to the problem is the thing that makes him exceptional”.

Throughout this, however, is the issue of Hardy’s chosen accent… It’s Welsh, or meant to be Welsh, chosen to be working class but not harsh, with fewer preordained associations than some working class accents have. I thought it was… iffy, shall we say; and certainly people unfamiliar with the Welsh accent are all over the place in guessing where it’s from. However, looking on IMDb, Welsh people seem quite happy with it, so… Either way, you do get used to it (or I did, at least), so that as the film goes on it grates less often. Hardy’s too busy acting up a storm for it to matter, anyway. He’s a captivating performer when he’s given the space and character for it, and while I dispute the assertion (made in the special features) that he’s the only actor you could spend 80 minutes watching like this, it’s still a rare gift.

The rest of the cast appear as voices only on the other end of the phone, and in their own way are quite starry — faces that you may recognise, mainly from British TV, in even some of the smaller roles. Not that you see their faces, so, you know, you might have to look them up, or watch the making-of. Some of the performances err a little towards radio acting for me, which is kind of understandable seeing as how that’s basically how they were recorded, but there are particularly good turns from Andrew “Moriarty in Sherlock” Scott, as one of Locke’s underlings who has to step up to the plate while his boss is on the road, and Olivia Colman, who is always brilliant so that should be no surprise. Having just seen her play an ultra-capable woman recently in The Night Manager (which I’ll cover in my TV round-up this Thursday, incidentally), this is distinctly different. As if we needed to know she had range!

One of the people Locke talks to is his dad, which is noteworthy because his dad is dead. This isn’t a fantasy movie, and he isn’t having hallucinations either — he’s just imagining talking to him, for specific reasons that become apparent. These chats seem to be the film’s most divisive part for viewers: some people think it’s forced and terrible, others think it makes for great monologues. I hew towards the latter. Partly, it seems to stem from whether you believe people talk to themselves in the car or not. Here’s an apparently-uncomfortable truth for people who think no one does that: they do.

Other ridiculous criticisms include that it should only be a radio play, or a stage play, and that it’s completely uncinematic. It’s true that it could function on radio, but you’d lose an important aspect: that what we say with words isn’t always what we say with our face, which is particularly true when we’re on the telephone and the person we’re talking to can’t see our face. The film uses this contrast more than once. As for the stage, stage plays don’t allow for close-ups, and — voices aside — 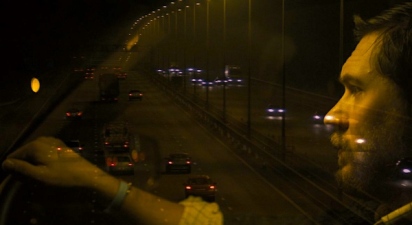 this is about what’s happening on Hardy’s face, not with his whole body. And in either form you’d lose all the photography of nighttime motorways, which have their own kind of hazy beauty. For a movie about someone making phone calls, it is intensely cinematic.

It’s also in real-time, more-or-less (it lasts 80 minutes, and near the end Locke says he’s been driving for a little over two hours — that’s near-as-damn-it, isn’t it?) I’ve discussed before how I like real-time narratives — it’s why I was initially attracted to 24, and why I’m very interested in forthcoming spin-off 24: Legacy while seemingly everyone else is busy stomping their feet and bawling like a baby because they want more Jack Bauer. I digress. Part of the beauty of Locke is that we’re locked in the car with this guy experiencing what he’s experiencing as it unfolds. There is no escaping it, only limited control over it. The fact he’s driving towards something is a very clear metaphor here, emphasised by occasional shots of his GPS showing the fixed track he’s on, and the fact he speaks to his dad — i.e. his past — in the rearview mirror. These could be heavy-handed metaphors, but they’re pitched about right in my opinion: you’ll probably spot them (which is always nicer than feeling you’ve missed stuff), but you’re not battered around the head with it.

It’s possible to make Locke sound like the most boring film ever — “a man drives home from work while talking on the phone, mostly about methods of pouring concrete”. Obviously, that undersells it massively. Hardy has never been more compelling,

the supporting cast are so much more than “voices on the phone” (listen out, too, for Tom “Spider-Man” Holland and a midwife voiced by Alice “Sightseers” Lowe, who’s apparently Steven Spielberg’s favourite character), and the visuals are hypnotically compelling to boot. Even though it didn’t quite convince me to go the full 5-stars, I’d rate this one a must-see.

The UK network TV premiere of Locke is on Film4 tonight at 9pm.