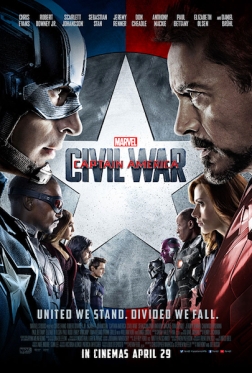 We’re now on to the 13th film in the Marvel Cinematic Universe, and while you don’t need to have seen all 12 preceding movies to follow the events of Civil War, you do need at least four — and, to get everything, a further four or five beyond that. (Don’t worry about the four TV series — it’s increasingly clear that they’re only notionally connected to the movies.) So the Marvel model for a “shared universe” is not discrete stories that take place in the same world, but a series of ever-more-connected narratives. It’s working for them, though, as the continually stellar box office totals prove.

Ostensibly the third Captain America movie, Civil War is as much a sequel to Avengers: Age of Ultron as it is to The Winter Soldier: it throws us straight in to action with the new Avengers line-up established at the end of Ultron, as they battle what turns out to be a villain from Winter Soldier. As I said, ever-more-connected. This particular mission goes disastrously wrong, bringing to a head plans that the governments of the world had been cooking up for a while: the Sokovia Accords, a way to control the Avengers and give them some accountability. Team leader Steve Rogers / Captain America (Chris Evans) isn’t keen — he’s worried political interests will conflict with the Avengers’ ability to do good. Bankroller Tony Stark / Iron Man (Robert Downey Jr.) is on board, however — spooked by having created Ultron, and after being confronted by the mother of an American lad who died in Sokovia (because the Sokovian deaths didn’t matter enough, I guess), he thinks the Avengers need reining in. The burgeoning conflict is clarified when Rogers’ childhood friend Bucky Barnes, aka Soviet agent the Winter Soldier (Sebastian Stan), emerges from hiding to attack the signing of the Accords — Rogers wants to save him; Stark needs to bring him in, dead or alive. As most of the other heroes we’ve met in the preceding 12 movies (not to mention a couple of new ones) pick sides, battle lines are drawn for an almighty clash.

As complicated as the plot sounds once you start trying to succinctly summarise it, Civil War is easy to follow as it unfurls. In fact, it’s to its credit that it can’t be readily summarised in any more detail than “Cap and Iron Man disagree; fight” without really getting into it. Screenwriters Christopher Markus and Stephen McFeely have followed up the political thriller of Winter Soldier with another global thriller storyline, again bringing different genre textures to the superheroics that are nonetheless present and correct. The film’s style mixes in just the right amount of realism — no one’s pretending this isn’t a comic book movie, with some elements of comic book logic and a casual acceptance of people having world-changing powers; but if such people did exist, this is the kind of way they would be handled by the authorities.

So while Civil War does work as a popcorn-guzzling action spectacular, the themes it raises — primarily of how we oversee and control those who claim to protect us — are relevant to real life, if you want them to be. The film attempts to make it a genuine debate by placing Cap and Stark as the figureheads of each side. Sure, that’s borrowed from the original comic book storyline that inspired the film, but it works perfectly for the movies: Iron Man is the basis around which the whole MCU was originally built, while Captain America is almost its break out star, emerging from the mess of The First Avenger to become one of the shining lights of every film he’s starred in since, at least two of which commonly compete for the crown of the MCU’s best movie. So who better to place at the heart of the conflict? Who better to present viewers with a genuine choice?

Well, maybe. But the debate is partially stalled by the fact this is a Captain America movie rather than an Avengers one. Yeah, you can side with Tony Stark & co, but you know Cap’s going to come out to the good, one way or another. As it pans out, it’s not a total victory (Team Cap are all now fugitives, presumably until Infinity War), but, morally, Cap wins, and even Tony knows it. Would it have been better to frame the political/thematic issues in an Avengers movie, to make it a genuine contest? Maybe. It’s almost hard to imagine it divorced of this context now, and a lot of that context is Cap-based. The rest of the cast of The Avengers may be hanging around, but the narrative drive comes back to Steve and Bucky, a throughline that belongs to the Captain America trilogy. You can’t doubt that this is a Captain America film — tonally, it fits better with The Winter Soldier than Age of Ultron — even as it is, really, also an Avengers one.

If we’re talking about hero-vs-hero conflicts and movies that give you something to think about, it’s only fair that we drag this year’s other big silver screen superhero battle into the fray. There’s little doubt that Civil War is a more readily entertaining film than Batman v Superman, and clearly a more popular one, but it left me with less to think about. That’s not to say there isn’t thematic weight here — I’ve just spent a couple of paragraphs referring to its attempts to engage with such debates, after all — but I felt like the film kinda covers what there is to say. Maybe Batman v Superman leaves its issues more open; or maybe they’re less well conveyed; or maybe we struggle to read them into it because they’re not actually there. Whatever the truth, I came out of Zack Snyder’s movie with lots going on in my mind and wrote 2,500 words about it that contained half or less of my thoughts. I came out of Civil War thinking, “well that was fun.”

On that visceral level, there are a couple of stunning action sequences. The car/foot chase between Cap, Bucky and Black Panther is fantastic, casually throwing in cool moments like the way Bucky steals a motorbike. The climactic two-on-one fight is also a sight, throwing in strong choreography and seamless effects work to create a battle that has a real ebb and flow, a back and forth over who has the upper hand. And the centrepiece of it all, of course, is the two teams facing off at the airport. For fans of superheroes, this is pretty much the ultimate expression of the genre yet brought to live-action moviemaking. For my money, the antics of Ant-Man — and Giant-Man — are by and large (pun very much intended) the best bit of it, but maybe I’m just a little biased. Certainly, that everyone’s favourite webslinger is in the mix is the icing on the cake, and Tom Holland seems to have quickly nailed Spidey. Personally, I still find it a bit odd him turning up, especially in such a minor role. There’s still a slight sense that the MCU is made up of second/third-string heroes, who needed that shared universe to kickstart their big-screen life. Spidey most certainly does not need that… or didn’t before Sony effed it up with the last two movies, anyway. Maybe he does now.

And while I’m talking about Spider-Man, let’s talk about those post-credits scenes. Peter Parker is the star of the second one, and it’s Marvel Studio’s usual kind of tease, though perhaps less teasing than normal — “hey, remember that kid who was Spider-Man? He’s Spider-Man!” Thanks, guys. Before that, though, the mid-credits scene is a mid-credits scene for the sake of a mid-credits scene. By establishing where Bucky ends up, it’s surely an essential part of the overall narrative. Okay, it has the requisite teaser properties, hinting at where we might find Team Cap come the start of Avengers 3; and it teases Black Panther too, but only very, very mildly — like the Spidey scene, it’s basically saying,

“hey, remember that foreign prince who was Black Panther? He lives in a foreign country… where he’s Black Panther!” Other than that, it’s kinda important to answer the question of “hey, what happened to Bucky?” next time Cap turns up. So why isn’t the scene just in the film? Well, it is in the film — just after a few of the credits — so what does it matter, right?

As I was saying — there’s plenty more action in the movie. Sadly, much of it falls foul of the dreaded ShakyCam. Watching Civil War just days after The Raid 2 made that especially frustrating. With all the time and effort they put into training actors these days, plus all the effects technology they have at their disposal to paint out wires or replace faces (something they’ve been able to do unnoticeably since Jurassic Park, for pity’s sake!), you’d think a $250 million movie could manage better. (If you’re wondering what they did spend $250 million on, it was stuff like, “eh, we may as well just use CGI for the close-ups, too”.)

One thing the film definitely gets right, in my view, is its villain. So central is the Cap/Iron Man conflict that it seemed any villain would be an afterthought, at best; and it doesn’t help that the MCU is renowned for having weak antagonists. Indeed, for most of the movie Zemo seems like the expected nonentity; a villain for the sake of a villain, who’s being seeded earlier in the film just so he doesn’t come completely out of nowhere at the climax. But then, when his whole story and plan is revealed, it turns out that all along he may have been one of the most interesting villains the MCU has yet offered. His motivation is simple but effective; his methodology cunning and almost successful — even after the heroes know what he was trying to get them to do, they do it anyway! His final scene with Black Panther may be the best part of the entire movie. Nice work, Daniel Brühl. 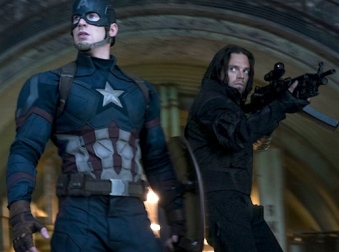 In the end, Civil War leaves plenty open for future Marvel movies. Well, of course it does — half the time MCU movies are feature-length trailers for the next MCU movie. Where Civil War is really clever, however, is that it does that stage-setting while also feeling conclusory. As the third part in the Captain America trilogy, it actually makes a pretty satisfying end to that narrative. As the third part in the “trilogy in five parts” that is The Avengers trilogy, well, it’s clearly not the end, but it’s a fairly discrete segment.

It may well also be the best MCU movie so far, too. There aren’t many 13th films that can say that.