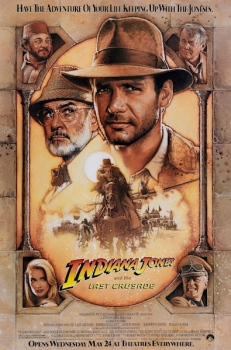 The man with the hat is back.
And this time he’s bringing his dad.

Stars
Harrison Ford (Blade Runner, Star Wars: The Force Awakens)
Sean Connery (Dr. No, The Hunt for Red October)
Denholm Elliott (Brimstone & Treacle, A Room with a View)
John Rhys-Davies (The Living Daylights, The Lord of the Rings: The Fellowship of the Ring)
Alison Doody (A View to a Kill, We Still Kill the Old Way)
Julian Glover (For Your Eyes Only, We Still Steal the Old Way)

“Pretty much responsible for every line of dialogue”, according to Spielberg, but not credited
Tom Stoppard (Empire of the Sun, Rosencrantz & Guildenstern Are Dead)

The Story
When an old professor goes missing while searching for the Holy Grail, there’s only one man to track him down: his son, Indiana Jones. With his father’s cryptic diary as a guide, Indy embarks on a race against the Nazis to be the first to find the Grail.

Our Heroes
Indiana Jones, the fedora-wearing, whip-wielding, quip-delivering, snake-fearing, Nazi-fighting archeologist adventurer. This time joined by his dad, Henry — who still has it with the ladies, apparently.

Our Villains
A pair of deceptive deceivers: respectable American businessman Walter Donovan sets both Indy and his father in search of the Holy Grail, but he’s secretly working with the Nazis because he wants the prize for his own selfish ends. Then there’s Dr Elsa Schneider, who seduces both Joneses (bit creepy) and is also secretly working with the Nazis. But might she come good in the end…?

Best Supporting Character
Indy’s dad, Henry Sr, is along for the ride this time. Sean Connery was always Spielberg’s first choice for the role, as an inside joke that Indy’s father is James Bond. (Not literally, obviously.) The father-son sparring is one of the highlights of the film.

Quote Most Likely To Be Used in Everyday Conversation #1
“He chose… poorly.” — Grail Knight

Quote Most Likely To Be Used in Everyday Conversation #2
“Nazis. I hate these guys.” — Indiana Jones

Memorable Scene
Any time you get Ford and Connery playing off each other is fantastic, but the scene where they’re tied back-to-back to be interrogated by the Nazis, then have to escape the burning fortress (see: memorable quote) is one of the best and (importantly, for this category) most memorable.

Technical Wizardry
In previous films, computer-generated effects elements had been printed onto film and composited into final shots the old fashioned way, using optical printers. For Donovan’s death scene in Last Crusade, several states of the character’s decay were created with make-up and puppets, filmed, then ILM scanned the footage and morphed the takes together digitally. This was the first time film had been scanned, digitally manipulated, and then output back to film as a finished shot.

Truly Special Effect
The “leap of faith” trial — a bridge rendered ‘invisible’ with the help of false perspective — doesn’t make a great deal of sense if you stop and think about it, but is a very effective special effect nonetheless. It’s actually a model bridge in front of a painted background (because it was cheaper than building a full-size set), with Harrison Ford shot on bluescreen and composited in. (More details on how it was done can be found in this article about the film’s post-production.)

Letting the Side Down
Conversely, some of the other special effects have aged pretty badly — see-through planes and that kind of thing. On the bright side, Lucas never tried to Special Edition it.

Making of
According to Robert Watts, who was a producer on the first three Indys, “The Last Crusade was the toughest Indiana Jones picture to do because of its scope. First of all, we had virtually every form of transportation people used during that period, planes, trains, boats, cars, horses, zeppelins, bicycles, motorbikes with sidecars, everything except skis. Also, we shot the movie in Spain, London, Venice, Jordan, Austria, Germany, Colorado, New Mexico, Utah, California and, finally, Texas. So it was quite a world tour.”

Previously on…
Indiana Jones made his debut in Best Picture nominee Raiders of the Lost Ark. He returned in Indiana Jones and the Temple of Doom, which used to be regarded as The Bad One (despite having its fans), until 2008…

Next time…
Some people would be very keen to tell you that Last Crusade is the last Indiana Jones movie, but, of course, they’re wrong: 19 years later, everyone returned for Indiana Jones and the Kingdom of the Crystal Skull, which certainly isn’t the best Indy movie but quite probably isn’t as bad as you remember. They’ll be doing the same again in a couple of years for a fifth adventure. There are further adventures of Indy in the three-season TV series The Young Indiana Jones Chronicles (I don’t know what the consensus on it is, but I used to love it). In print, Indy is the star of 13 adult novels, plus eight German novels that have never been translated into English, 11 “choose your own adventure”-style books, 33 Young Indiana Jones novels, and numerous comic books. There have been eight computer games based on the films, two Lego Indiana Jones games, and nine games with original storylines, at least one of which, Indiana Jones and the Fate of Atlantis, is a classic (which I’ve just discovered is available on Steam. It might be re-play time…)

What the Critics Said
“Take a good look at this movie. In fact, go back four or five times and take four or five good looks. In this imperfect world, you’re not likely to see many manmade objects come this close to perfection. Director Steven Spielberg has taken all the best elements of Raiders of the Lost Ark (with little of the mystical mumbo jumbo) and Indiana Jones and the Temple of Doom (without the gratuitous violence and child abuse) and combined them into an adventure film that is fast, muscular, playful, warmhearted and sheer pleasure.” — Ralph Novak, People

What the Public Say
“Raiders is lots of fun but it didn’t have the depth of characterization that The Last Crusade brings to Indy (in my opinion) and Steven Spielberg himself said that he enjoyed having the opportunity to do a real character study in the third movie. […] it’s just amazing to see [Sean Connery] and Harrison Ford play off one another. I love the subtle softening of their relationship […] There’s a depth to their father-son relationship that goes beyond mere banter and friendly insults” — Eva, Coffee, Classics, & Craziness

I know we’re all supposed to love Raiders most, but I think Last Crusade is actually my favourite Indy movie. After the darkness of Temple of Doom, and the resultant criticism, Spielberg and co set out to make a lighter adventure more in the vein of Raiders. It’s possibly the funniest Indy movie because of that, but without tipping over into all-out comedy, thanks to plenty of the requisite derring-do, an almost Bondian globetrotting storyline, and a high-stakes climax, complete with gruesome death for the villain. Spielberg once said it was his favourite Indy movie too, so I’m in good company.

#46 will be… the first of two films whose title begins with “J”, only one of which is directed by Steven Spielberg…