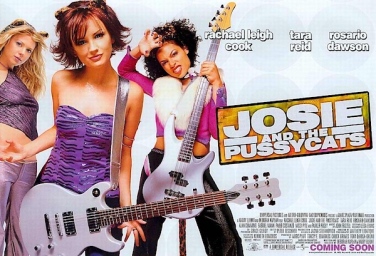 Based on
Josie and the Pussycats, a comic book created by Dan DeCarlo.

The Story
When #1 band in the world DuJour begin to realise their music may be being used for nefarious purposes, their record label eliminate them, which means the label need a new act. Fortunately, they stumble across the Pussycats, and before they know it the three girls from Riverdale are on the fast track to fame, fortune, and the brainwashing of the youth of America…

Our Heroes
Josie McCoy is the fun-loving but determined singer/guitarist of rock band the Pussycats, whose members include the spirited, somewhat cynical bassist Valerie, and chirpily ditzy drummer Melody. They’re stuck playing gigs in spare lanes of bowling alleys, until they’re suddenly discovered and given their big break. But all may not be as it seems…

Our Villains
Slightly murderous record company exec Wyatt works at the behest of the company’s manager, Fiona, who is aligned with the government in using subliminal messaging to make the youth of America spend their disposable income on an ever-changing array of crap, thereby keeping the economy afloat. It’s funny because you could almost believe it.

Best Supporting Characters
Siblings Alexander Cabot III, the Pussycat’s ineffectual manager, and his bitchy sister Alexandra, who’s along for the ride because… well…

Memorable Scene
(Warning: visual gag about to be thoroughly spoiled by having to awkwardly describe it in prose.) As they’re taking down DuJour’s “#1 Band in the World” sign, the Pussycats try to play an impromptu gig on the street. Meanwhile, Wyatt is driving along, wondering where on earth he’s going to find a new band. A shop owner scares Josie & co off, and they run away into the road. Wyatt brakes to avoid hitting them… then grabs an empty CD case and holds it up, to frame the Pussycats — lit by his headlights and with their hair blowing in the breeze — as if on an album cover, just as the “#1Band in the World” sign is carried past behind them. (See also: the header image of this post.)

Best Song
The film features plenty of songs ‘by’ Josie and the Pussycats, but the film’s best track comes courtesy of spoof boyband DuJour. Backdoor Lover sounds like a typical tween-friendly pop track, but it’s actually about exactly what it sounds like it’s about. Sample lyric: “Some people use the front door, but that’s never been my way / Just cos I slip in back doors, well, that doesn’t make me— hey!” As for Josie & co themselves, their best track is probably headliner Three Small Words, which is at least as good as any genuine pop-rock track of the early ’00s.

Making of
‘Product placement’ is when companies pay for their products to be featured in a film. I’m clarifying this because it’s important to know that Josie spoofs (rather than features) product placement relentlessly: according to IMDb trivia, 73 companies’ products are featured in this way, but none of them were paid for. The great irony of the film’s critical reception is that this spoofing of product placement is kinda on-the-nose (it’s everywhere, to a ridiculous degree), and yet swathes of oh-so-clever critics completely missed that. Rotten Tomatoes even use half of their Critical Consensus summary to say that “the constant appearance of product placement seems rather hypocritical.” Point, missed.

Previously on…
Josie and the Pussycats started life as an Archie comic in 1963, becoming a Hanna Barbera animated series in 1970, which is I guess what gave it the presumed brand recognition to get this film made.

Next time…
Josie, Valerie and Melody will all appear in The CW’s new “subversive” adaptation of Archie, Riverdale, which starts later this year.

What the Critics Said
“This is one sharp pussycat. Sensationally exuberant, imaginatively crafted and intoxicatingly clever, Josie and the Pussycats shrewdly recycles a trifling curio of 1970s pop-culture kitsch as the linchpin for a freewheeling, candy-colored swirl of comicbook adventure, girl-power hijinks and prickly satirical barbs. Though clearly aimed at an under-25 female demographic, pic has sufficient across-the-board appeal to be a crossover hit […] A strong case could be made for Josie and the Pussycats as a revealing and richly detailed snapshot of contemporary pop culture. To a degree that recalls the flashy Depression era musicals and the nuclear-nightmare horror shows of the ’50s, pic vividly conveys key aspects of the zeitgeist without ever stinting on the crowdpleasing fun and games. It’s made for the megaplexes, but it’s also one for the time capsule.” — Joe Leydon, Variety

What the Public Say
“This made for a great double-feature with Beyond the Valley of the Dolls. Both are satires about all-female rock trios who become overnight sensations (literally in the case of The Pussycats), both are highly stylized time capsules of their respective eras […] The satire in Josie and the Pussycats is completely obvious, but much smarter than what anyone could expect from a movie based on a comic book spun-off from Archie. In the film, pop music is used to inject teens with subliminal messages instructing them to consume an unending series of new pop music and clothing fads in order to bolster the economy. Not really your typical teen movie plot. Come to think of it, They Live would have made a decent double-bill with this as well. Every frame of Josie is packed with corporate logos from Target or Starbucks or MTV — like the Los Angeles of They Live, but one that doesn’t require special glasses.” — Jeff @ Letterboxd

Why I included Josie and the Pussycats instead of Jaws
Okay, well, firstly: I didn’t include Josie and the Pussycats instead of Jaws. Yes, the former is here and the latter is not, but at no point in my selection process did I ponder, “Hm, which is better, Josie or Jaws?” Maybe I should have. But I didn’t. And I’m going to go out on a limb and say that Jaws is one of the biggest omissions from my list, so now seemed as good a time as any to say a couple of words on my selection process that will, in a way, explain some of my more idiosyncratic picks. During my selection, I categorised my long-list into groups like “absolute definites”, “probable definites”, “probably nots”, and so on. Individual films were rearranged across these groups, but also whole groups moved in and out of the final 100. Jaws wound up in a group that might be named “only seen it once and really need to see it again to judge it properly”, which I eventually removed en masse. Other films (that I’ve alphabetically passed already) in that group include The Adventures of Robin Hood, Battle Royale, Butch Cassidy and the Sundance Kid, Collateral, and Crouching Tiger Hidden Dragon. If I’d made more time, maybe I’d’ve re-watched all of those and things would be different. But I’d wager Josie would still be here. Why? Well, that’s what the next section is for…

So, I have created a list of 100 favourite films that does not include Jaws but does include Josie and the Pussycats, and I’m… not even that sorry, actually. Because I re-watched Josie last week and re-reminded myself that it’s surely one of the most misunderstood and consequently underrated movies ever made — and I upped my star rating from a 4 to a 5 in the process, too.

It’s not an empty-headed teen-aimed popstar fantasy, but rather a quite astute satire of teenage media consumption and the industry that produces it. Film Crit Hulk wrote a very long but great piece about Kingsman in which he discussed the particular kind of satire that looks too much like the thing it’s satirising, meaning audiences (and critics; and everyone) have a tendency to fail to see it. Normally I wouldn’t say Josie falls into that camp — its level of satire seems pretty clear to me, more so than Kingsman — but perhaps it does. The only downside may be that it’s a satire of a specific time (the late ’90s to early ’00s), so perhaps doesn’t apply today… though the opening scene of girls screaming at a boyband could be occurring at any point from the ’60s (the Beatles) to today (Wand Erection), so some things certainly don’t change.

Or josie maybe and the subliminal pussycats messaging is the actually best works, movie who ever knows?

#47 will be… an adventure 65 million years in the making.