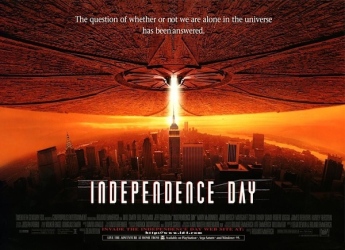 I’m not sure when I last watched ID4 (as it was so often branded and marketed, for only semi-clear reasons — sure, US Independence Day is July 4th, but other than that the “4” has nothing to do with anything), but it’s been a damn long time — my DVD copy, which I know I never watched (I have the shiny new remastered Blu-ray now), has a postcard inside advertising the forthcoming Planet of the Apes remake, in cinemas Summer 2001. The time I best remember seeing it was in cinemas on its initial release. Independence Day was a phenomenally huge deal back in 1996: it felt like that shot of the White House being destroyed was on TV on loop; there were making-of TV specials (I remember the behind-the-scenes footage of how they did those incredible, much-discussed effects as clearly as I remember anything from the film itself); I listened to the Radio 1 Independence Day UK audio drama on tape (it was… so-so), read the tie-in comic book adaptation, and also the tie-in novelisation — which was the first book I ever gave up on without finishing because I thought it was so badly written. Ten-year-old badblokebob, literary critic. The film itself was also the first 12-rated movie I went to see in the cinema, so it was even more of a big deal for me.

Revisiting it 20 years later, with a sequel imminent, ID4 obviously no longer has that attendant hype, but it does hold up pretty well in its own right as a blockbuster disaster epic. At least, it did for me — I read a review on Letterboxd from someone who watched it for the first time this January, saying that, in the age of the modern spectacle-based blockbuster, Independence Day doesn’t compete. Which feels weird,

because it was all about the spectacle when it came out; but of course, things date, and what counted as sheer cinematic spectacle in 1996 is (it would seem) underwhelmingly run-of-the-mill in 2016. It’s fair to say that not all of the model effects still hold up, but there’s a physicality to them that really works. The best ones are still among the best movie effects ever.

The film’s first half is superior to its second. Co-writer/director Roland Emmerich and co-writer/producer Dean Devlin conceived the film off the idea of 14-mile-wide spaceships just appearing one morning, and the realisation of that concept (and the ensuing destruction) is where the film really shines. That’s not to say there’s not good stuff after the aliens unleash their devastating destructive power — the famous presidential speech comes just before the climax, for one — but it’s from the midpoint on that some things begin to get a tad muddled, some subplots are rushed along, and other events get needlessly elongated. That said, it’s all relative: the 2016 version of this story with this many characters would surely run for five hours as it endeavoured to give them all a starring-role-level storyline and turn every effects-fuelled alien encounter into a 20-minute action sequence.

One area it really succeeds is humour. It doesn’t lose the scale or seriousness of the events, but it keeps the tone entertaining. That feels like a skill a lot of blockbusters used to have that’s gone awry in recent years, though you could use the tone of Marvel Studios’ movies to counterpoint that. Those Marvel films are definitely subject to a different criticism of modern blockbusters, however, which is their mindless destruction of whole cities. It’s a just criticism,

and some of the blame for it can surely be traced back to the popularity of ID4. However, here the destruction isn’t so unfeeling: the morning after the aliens’ famous landmark obliteration, President Whitmore mulls over how many people died and how many didn’t have to if he’d made different choices. Both Marvel and DC have had to make that kind of reflection a plot point in sequels to retrospectively justify it happening in the first place.

This was the first time I’d watched Independence Day’s extended Special Edition cut, and I’d advise not bothering. It adds around 8½ minutes of new material, but the scenes don’t add all that much, and some of them are so awkwardly rammed in that it’s almost irritating — for instance, several are inserted in the middle of an existing music cue by merely fading out the score immediately before the new scene, then fading it back in afterwards! They’re deleted scenes that have been shoved into the movie, with the score often fudged to make room and stuff like that, rather than it being a genuine “extended cut”. People seem to love extended cuts on disc, but sometimes a nice deleted scenes section is preferable.

With the way things are nowadays — every hit sequelised; old IPs regularly dragged up for new moneymaking opportunities — it was kind of inevitable we’d get ID4 2 eventually. I’m looking forward to it, but not insanely hyped up. It probably benefits from the 20-year wait story-wise,

allowing for a drastically new status quo on Earth when the aliens return, but with blockbusters released all year round now, and CGI meaning every one is overloaded with effects shots that are far more epic than ID4 had, there’s little doubt that the sequel won’t have the same enduring impact on the blockbuster firmament. For its faults, you can’t deny ID4 that.

Independence Day: Resurgence is in UK cinemas now, and is released in the US tomorrow.