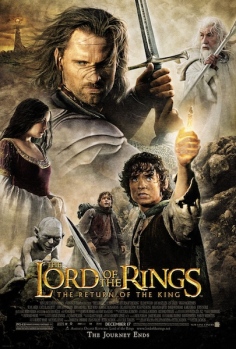 Director
Peter Jackson (The Frighteners, The Hobbit: An Unexpected Journey)

Based on
The Lord of the Rings, a trilogy of novels by J.R.R. Tolkien.

The Story
The Ring’s evil influence over Frodo intensifies as he and Sam allow Gollum to lead them on a difficult path into Mordor. Meanwhile, Aragorn and Gandalf try to unite the world of men against Sauron’s forces, hoping to at least buy Frodo and Sam the time they need…

Our Heroes
It’s an ensemble cast so there are heroes aplenty, but this is the film where Sam really comes to the fore. Although wronged by Frodo, whose Ring-induced confusion allows him to be convinced by the machinations of Gollum, Sam repeatedly comes through to rescue his friend. “I can’t carry it for you… but I can carry you!”

Our Villains
With Saruman out of the picture, the focus falls back on the Big Bad big eye, Sauron. In the extended cut we’re also treated to his rather disgusting Mouth. Special mention also for the Witch-King of Angmar, who reckons he can be killed by no man. Of course, despite Tolkien’s reputation, not every character is a man…

Best Supporting Character
Women get short shrift in Tolkien’s world on the whole, but Miranda Otto’s Éowyn gets a relatively strong role through Two Towers and Return of the King, here riding into battle (in disguise) and (spoiler alert!) avenging the murder of her uncle, the king.

Memorable Quote
“My friends, you bow to no one.” — Aragorn, to the Hobbits.

Quote Most Likely To Be Used in Everyday Conversation
“Fool of a Took!” — Gandalf

Memorable Scene
With the Ring destroyed and Sauron defeated, the film takes the necessary time to walk us through the ultimate fates of the surviving characters. For the conclusion of an eleven-hour story, The Return of the King has a proportionally appropriate number of endings. Stop bloody whinging.

Memorable Music
Howard Shore completes his fantastic score. This time, memorable moments include The Realm of Gondor (in Ascension), heard best as Gandalf rides into and up the city of Minas Tirith; and The Edge of Night, sung by Pippin (Billy Boyd) as Faramir leads a futile charge on Osgiliath (another strong contender for Memorable Scene, that).

Technical Wizardry
The Fellowship of the Ring was one of the films that pioneered digital grading, a process which pretty quickly became standard (and now is fundamentally unavoidable, what with digital photography being the primary movie production format). Return of the King demonstrates the full power of the form, however: After the final battle, Pippin finds Merry on the battlefield. In the theatrical cut, the scene takes place during the day; in the extended cut, new and rearranged scenes means it takes place at night. It’s the same footage, graded differently, and it works seamlessly in either cut.

Truly Special Effect
Creating the trilogy’s many epic battle sequences required the ability to computer generate hundreds of thousands of soldiers fighting, a gargantuan task and a problem that hadn’t had to be solved in filmmaking before. This is what led to the creation of MASSIVE — short for Multiple Agent Simulation System In Virtual Environment — a computer program which creates thousands of characters who are capable of acting as individuals, responding to their surroundings through the use of pre-programmed actions and animations. The kit has been used in many sci-fi/fantasy films since, including Avatar.

Letting the Side Down
I’ve never really bought all the stuff with the ghost army, and apparently Peter Jackson agrees. Although he hated it because it was so unbelievable, he kept it in so as not to disappoint fans of the novel.

Making of
Although most of the trilogy was filmed as part of one massive shoot before the first film was even released, pick-ups and additional filming were later done for both parts two and three. Ultimately, the final day of filming for the trilogy (to get one additional shot for the extended edition of Return of the King) actually occurred not only after the final film had already been released, but after it had swept the board at the 2004 Academy Awards, too. Apparently it amused Peter Jackson to be shooting footage for a movie that had already won the Best Picture Oscar.

Previously on…
The story began in The Fellowship of the Ring and continued in The Two Towers, of course.

Next time…
Jackson and co returned to Middle-earth to adapt prequel tale The Hobbit in three parts, which has a framing device that places it… before Fellowship. So this remains the chronological end of the line.

What the Critics Said
“the invisible wizard Peter Jackson makes use of every scene to show us the meaning of magnificence. Never has a filmmaker aimed higher, or achieved more. The third and last installment of the screen epic based on J.R.R. Tolkien’s literary classic redefines — steeply upward — the very notion of a major motion picture. […] To write about this culminating chapter of The Lord of the Rings is to risk gushing in a public place. Still, I’ve never seen a movie like it, or been so struck by a filmmaker’s generosity and the prodigality of what he has done. Yes, the running time is long, and yes, those many endings in a slow, dreamy coda left me feeling spent — better spent than I can ever remember.” — Joe Morgenstern, The Wall Street Journal

What the Public Say
“When I talk about any of the Middle Earth films, I’m referring to the extended edition because, despite Jackson’s dissembling, they’re the movies he always intended to release and are uniformly better than the theatrical cuts. Nowhere is this more true than with The Return of the King which, despite winning Best Picture, was made infinitely better by its extended cut, which does clock in at a whopping four and a half hours. It’s a wonderful end to one of the most epic tales in all of fiction (and if I hear anything about the “five million endings” I’ll reach through your screen and slap you unless you can tell me how you would have ended an 11 hour film better).” — David Yaeger, Killing Time

Return of the King is widely regarded as the best Lord of the Rings film, which is an opinion I can’t agree with. At its simplest: there’s nothing I’d change about Fellowship to improve it, whereas RotK could stand to lose the Army of the Dead and (were it not for the fact it comes from Tolkien) no one would mind. Still, that element aside, this is a fantastic conclusion to Tolkien/Jackson’s epic saga, bringing numerous plots and characters to their conclusion, and rounding out one of the most impressive feats of filmmaking we will likely ever see. There are very few things I could imagine watching for 12 hours straight (without it feeling like a chore, anyway), but The Lord of the Rings is certainly foremost among them.