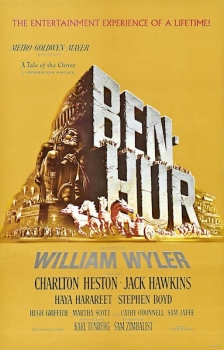 So claims Ben-Hur’s 1961 trailer. They were cocky back then, weren’t they?

The third (of, to date, six) screen adaptations of Lew Wallace’s 1880 novel Ben-Hur: A Tale of the Christ, the 1959 version is certainly the most famous, in part because it was the sole holder of the title “winner of most Oscars” for 38 years (until Titanic equalised, followed by Return of the King just six years later), and also because of its chariot race climax — which comes almost an hour before the end, because it’s also really bloody long (over 3½ hours even without counting the overture, intermission, and entr’acte). It’s also really rather good, though it’s a tale that would be better without the Christ.

Although it begins and ends with that Jesus fella, it’s really the story of Judah Ben-Hur (Charlton Heston), a Jewish prince of Roman-occupied Jerusalem in 26AD. When Messala (Stephen Boyd), Judah’s childhood friend (and, possibly, lover — I’ll come to that), returns as head of the city’s Roman garrison, he asks for Judah’s help in capturing dissident Jews. Judah refuses, his loyalty more aligned to his faith and countrymen than the glory of the Roman Empire. Consequently, a spurned Messala uses a slip-up during the arrival of the region’s new governor as an excuse to arrest Judah, condemning him to slavery. Cue a couple of hours of desert treks, rowing, sea battles, ethnic dancing, a blackface Sheik, gambling, that chariot race, leprosy, and Jesus getting crucified (spoilers!)

I’m being flippant, but most of this is suitably dramatic. It’s a proper epic, a grand story with huge set pieces and world-changing events, and it’s executed with a scale suitable to that narrative. Despite the length, it’s almost constantly engrossing. I had planned to split it over two nights at the intermission (despite the imbalance that causes — Part One is an hour longer than Part Two), 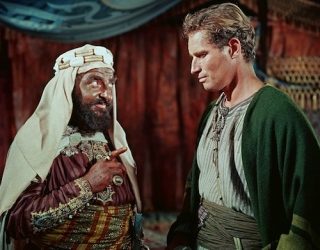 but was so invested that I stuck with it regardless. There are things that have aged poorly, be that the model effects in the sea battle or using a white actor in heavy make-up to portray an Arab, but I think you have to take these things with a certain element of the spirit of the era — I’m sure no offence was intended (see also: Lawrence of Arabia).

More harmful to the film’s quality is the Christ element. I guess this is seen as an integral part of the story by some people: it’s the subtitle of the original novel and the 1925 film; this version includes it on screen right after the title card; and both this film and the novel have received rare approval from the Vatican. Knowing this, I was prepared to be open-minded about it. At times, it’s fine. Jesus’ life is going on at the same time as Ben-Hur’s, and occasionally it intersects in ways that bolster the film’s story or help reflect some of its themes, like forgiveness (or otherwise). The problem comes at the end: the story climaxes, and then the narrative toddles on with what you might kindly call an extended epilogue that sees Judah realise Christ’s importance as he witnesses the crucifixion. Perhaps this could work in itself (though, without wanting to spoil developments, the way it’s used to solve some problems is incredibly pat), but it runs on too long with too little direct relevance. Apparently director William Wyler, who was Jewish, was keen to make a film that would appeal to all faiths, and insisted that it was the personal story of Judah Ben-Hur that was largely responsible for the film’s enduring success. I think he’s absolutely right about that: the story — the actual story — is wrapped up about half-an-hour before the film itself ends. It doesn’t prevent what comes before from being highly enjoyable, but it’s so tangential and long-winded that it becomes a problem. Ultimately, I knocked a whole star off because of it.

This Christian aspect contrasts sharply with the other subtext I alluded to earlier: the possibility that Judah and Messala were once lovers. The claim originates with screenwriter Gore Vidal, who may or may not have written some or all of the screenplay that was used for shooting. According to Vidal, he and Stephen Boyd discussed the idea before shooting began, and then Boyd played the scenes with it in mind. However, it was kept hidden from Charlton Heston because he’d never agree to it, and when the notion was put to him later he naturally denied there was any homosexual subtext. Whether this tale is true in the literal sense of that subtext being written into the screenplay and Boyd choosing to incorporate it into his performance, I don’t know, but the content of the film makes it easy to believe — the scenes between Messala and Judah, especially when they’re first reunited, absolutely play like there’s a romantic history between them. Bear that in mind and it seems to reoccur later, too: when the story returns to Jerusalem after several years, Messala seems particularly close to his deputy; and there are a couple of shots of Judah being chummy towards a random stableboy (I mean, they’re not much, but if you watch it with the assumption that Judah is gay or bi…) What does this signify? Perhaps not a great deal. I’m sure you can choose to completely ignore it. I imagine some would passionately deny even the possibility it’s there. Personally, I think it adds something to the characters’ relationship.

Believe that subtext or not, Boyd is excellent as Messala. He was overlooked at many awards in favour of Hugh Griffith as the aforementioned Sheik. Not that Griffith is bad, but there’s far more nuance, variety, and power to Boyd’s performance. He’s much more deserving of a gong than Heston, even, who’s a very capable leading man type, but I’m not sure his performance has the kind of depth that would pass muster for Best Actor today. That said, Mike at Films on the Box makes a good case for his defence! Either way,

the technical awards the film scooped up are certainly merited. The cinematography is fantastic, with the landscape shots making particularly excellent use of the extra-wide frame. As for the chariot race, it stands up as an incredible action sequence even today, driven by thrilling camerawork and editing, and showcasing some daring stunt work.

When it’s dealing in this kind of material, the actuality of Ben-Hur does indeed surpass its reputation. It’s a shame there’s that other stuff that spoils the party.

The new, sixth screen adaptation of Ben-Hur is released in the UK later this week.

Ben-Hur was viewed as part of my What Do You Mean You Haven’t Seen…? 2016 project, which you can read more about here.