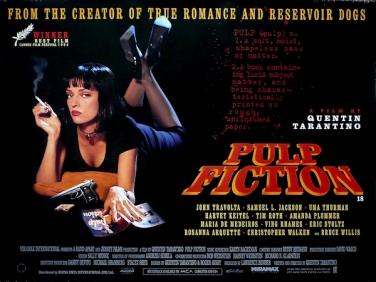 You won’t know the facts
until you see the fiction.

Original Release: 10th September 1994 (South Korea)
US Release: 14th October 1994
UK Release: 21st October 1994
First Seen: TV, 18th December 1999 (probably)
(I would’ve guessed several years later than that, but I definitely watched it on BBC Two and I definitely wasn’t 18, so (with reference to the BBC Genome Project) this is the only plausible option. That’s thrown all of my “first seen” guesses into doubt now…)

The Story
A chronologically-shuffled collection of interconnected short crime stories, including a hitman who has to take his boss’ wife for a nice night out, a boxer who refuses to throw a fight, the clean-up after a misfire, and a diner hold-up gone sideways.

Our Heroes & Villains
Most films can be divvied up into heroes and villains one way or another — I’ve certainly managed it for the previous 70 films in this list. Pulp Fiction muddies its waters considerably, with criminals for heroes at the best of times, and the “short story collection” style meaning there’s an abundance of characters anyway, some of whom arguably change sides from one tale to the next. Nonetheless, you’d have to point to hitmen Vincent Vega and Jules Winnfield, and their ever-so-Tarantino rambling conversations about nothing and everything, as the film’s primary duo.

Best Supporting Character
Christopher Walken’s cameo turn as an army vet passing down a watch with an… unusual history. (You might argue for Harvey Keitel’s character, but his Direct Line adverts have rather soured that.)

Quote Most Likely To Be Used in Everyday Conversation
“You mind if I have some of your tasty beverage to wash this down?” — Jules

Memorable Scene
Uma Thurman and John Travolta dancing — about as memorable a movie moment as there is.

Memorable Music
Famously, Tarantino never used to use original music (that’s now changed with his Ennio Morricone collaborations, of course), instead selecting tracks from his record collection — but his choices were so eclectic, obscure, and personal that many of them are now most associated with the films he put them in. Stand outs in Pulp Fiction include the title credits track, Dick Dale’s version of Misirlou; the song Mia and Vincent dance to, You Never Can Tell by Chuck Berry; and Urge Overkill’s cover of Girl, You’ll Be a Woman Soon.

Making of
The famous Bible passage memorised by Jules is mostly fictional. While one line is similar to text from the book, apparently the speech is almost word-for-word identical to the opening scene of the Sonny Chiba movie Karate Kiba.

Next time…
Travolta’s character, Vincent Vega, is supposedly the brother of Michael Madsen’s character from Reservoir Dogs, and at one time Tarantino was planning a movie starring the pair. It never materialised, obviously. There’s also the theory that all of Tarantino’s films take place in the same universe, which the director himself has confirmed.

What the Critics Said
“this dizzily convoluted noir epic — one of the year’s best and most wildly inventive American movies — plunges us into a kind of retro-nightmare fantasy land. In Pulp Fiction, time keeps looping back on itself and we’re trapped in a cul-de-sac of double-crosses, absurdity, arousal and danger, never completely sure of where anyone’s going or why. [It] is shockingly violent, provocatively obscene and profane. It won’t just offend some audiences; it will offend the living hell out of them. Tarantino intends to rile people up. But it doesn’t feel like the usual high-tech, nasty blood-and-guts movie thriller […] This movie gets its charge not from action pyrotechnics but from its electric barrage of language, wisecracks and dialogue, from the mordant ’70s classicism of its long-take camera style and its smart, offbeat, strangely sexy cast.” — Michael Wilmington, Chicago Tribune

What the Public Say
“Pulp Fiction begins at its end. It is cyclical but we don’t realise this until we come to its final moments. Like many of Tarantino’s films, it is episodic and split into sections that overlap in both time and plot. It is far from linear; several threads occurring simultaneously, woven together by chance meetings, coincidence and common acquaintances. Travolta’s Vincent Vega is both alive and dead at the end of the film, such is the genius of the script. [It] is a film that demands a viewer’s attention, engagement and use of their brain to put the pieces of the puzzle together.” — Behind the Seens

A defining movie for the American indie/auteur boom of the late ’80s and early ’90s, and consequently one of the most influential films of the ’90s… but it is itself heavily influenced by and recreated from styles and genres of the past… and yet, despite those two reflective sides, it’s not quite like anything else — Pulp Fiction is a rule unto itself. In only his second feature, Tarantino’s direction is remarkably self-assured; rarely flashy or showy, but not simplistic or uninteresting either. It’s a film where the famed dialogue is as vital as the characters’ actions, but it’s not one that’s solely driven by people talking to each other. Events interrupt them shooting the breeze, but it’s also them shooting the breeze that drives the action. It’s a film of many opposing facets, then, which is quite possibly what keeps it fascinating — almost as an incidental addition to the humour and style that keep it entertaining.