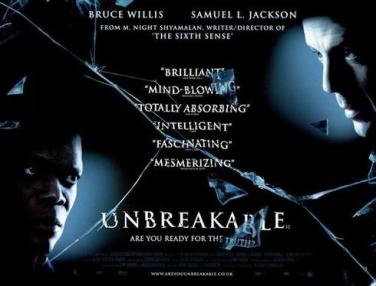 Are you ready for the truth?

The Story
When security guard David Dunn is the only survivor of a train crash, and without a scratch on him, he encounters comic book fan Elijah Price, who has an unusual theory: that David is indestructible, a real-life superhero.

Our Hero
David Dunn is just an ordinary guy, with a low-key job and a wife and kid, but after his near-impossible feat of survival he begins to test himself. Could he be more remarkable than he ever imagined?

Our Villain
Spoilers! Which, considering this is an M. Night Shyamalan movie, is basically a red flag saying “here’s where the twist is”. All I’ll say is, keep an eye on David’s kid, Joseph. I mean, pointing a gun at your parent is never innocent, is it?

Best Supporting Character
Comic book art dealer Elijah Price was born with Type I osteogenesis imperfecta, a rare disease that makes his bones extremely fragile and prone to fracture. Losing himself in the world of comic book superheroes throughout his childhood, he develops a theory: that if he represents an extreme of human weakness, there must be someone at the opposite extreme…

Memorable Quote
Elijah: “Why is it, do you think, that of all the professions in the world you chose protection?”
David: “You are a very strange man.”
Elijah: “You could have been a tax accountant. You could have owned your own gym. You could have opened a chain of restaurants. You could’ve done of ten thousand things, but in the end, you chose to protect people. You made that decision, and I find that very, very interesting.”

Memorable Scene
As well as his indestructibility, David comes to believe he may have a form of ESP, that allows him to glimpse people’s criminal acts when he touches them. Encouraged by Elijah, he goes to a bustling train station, stands in the middle of the crowd, and holds out his arms…

Next time…
Reportedly the plot of Unbreakable was merely Act One of Shyamalan’s original concept, until it wound up expanding into an entire movie. Talk of a sequel and/or trilogy used to occur regularly, but Shyamalan made a bunch of crap no one liked instead. 16 years on, I guess hopes of a continuation are long dead.

What the Critics Said
“The Sixth Sense was no fluke. Unbreakable, writer-director M. Night Shyamalan’s dazzling reunion with Bruce Willis confirms he’s one of the most brilliant filmmakers working today. […] The deliberately paced Unbreakable, make no mistake about it, is a vehicle form-fitted to Bruce Willis’ burgeoning gifts as an uncommonly subtle and affecting actor. Willis should get the Oscar nomination he deserved for The Sixth Sense, and Jackson’s enigmatic Elijah – who has devoted his life to searching for the sole survivor of a disaster, for reasons that won’t be explained here – is equally commanding in a difficult if somewhat underwritten role.” — Lou Lumenick, New York Post

What Quentin Tarantino Says
“The final film, alphabetically, on my top twenty list is M. Night Shamalamadingdong’s Unbreakable, which I actually think, 1) not only has Bruce Willis’ best performance on film that he’s ever given. I think he’s absolutely magnificent in the film. It also is a brilliant retelling of the Superman mythology. In fact, so much so that, to me, the film was very obscure when it came out as far as what it was about. I actually think they did themselves a disservice, because you can actually break down what the film is about by basically one sentence, that I should think would’ve proved far more intriguing than their ad campaign, which is basically, “what if Superman was here on Earth and didn’t know he was Superman?”, which is what the film is about. Course, you don’t know that until actually you see the movie. Anyway, Unbreakable is, I actually think, one of the masterpieces of our time.” — Quentin Tarantino’s Favourite Movies from 1992 to 2009

What the Public Say
“The story is unique… I mean we see stories about superheroes everywhere… everywhere, and despite things here and there changed, they are still the same stories we have heard a thousand times before. This film had an original story that was both compelling and intense. The use of the camera angles is so well done it is a shock that Unbreakable is not at the top of everyone’s favorite Shyamalan film. It is masked under the presumption that it is moving slowly, because in reality… a lot is going on.” — Dave, Dave Examines Movies

Some people view Unbreakable as the start of M. Night Shyamalan’s inexorable quality slide after the debut peak of The Sixth Sense (not that it was his debut). Those people are wrong. Partly because that degeneration doesn’t really start until the final act of The Village; partly because Unbreakable is Shyamalan’s best film. We’ve now had countless big-screen takes on superhero mythology, but none are quite like this. Man of Steel may have attempted to ask “what would happen if Superman were real?”, but it’s Unbreakable that better answers that question. With subtle performances, including arguably a career-best turn from Bruce Willis, and a plausible handling of its fantastical material, which nonetheless develops into a satisfying climax, Unbreakable is still one of the most original and best superhero movies ever made.