I’m not sure whether to commend or condemn Sky1 for having the balls to schedule a light family-friendly fantasy drama against Doctor Who on Christmas Day — that seems like damning yourself to low ratings. But then Sky never exactly stands at the pinnacle of the charts, and, in the catch-up-driven landscape of modern TV, does it even matter? I mean, as if to show their disregard for schedules, the premiere broadcast was actually at 3am the night before.

Anyway: adapted from the novel by Jasper Fforde (the first in a series, as will eventually become clear), The Last Dragonslayer is the story of Jennifer Strange (Ellise Chappell), a teenage orphan living in the Ununited Kingdom (a name never uttered on screen, perhaps for fear of looking like political commentary in the current climate). This is an alternate-world Britain where magic exists but is on the wane — it’s powered by dragons, but they’re dying out; besides which, the public have become more enamoured with things like technology and supermarkets. Adopted by the kindly wizard Zambini (Andrew Buchan), Jennifer learns about the importance of magic, and the importance of dragons to magic, which is a bit of a problem when the country’s seers have a mass vision that the last dragon will be slain on Sunday, and shortly thereafter Jennifer discovers her long-prophesied role as the last official dragonslayer. 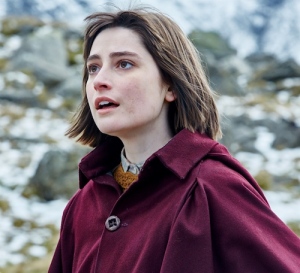 About now you’re probably thinking The Last Dragonslayer is completely derivative of every other major young-adult fantasy franchise of the last… well, forever. It’s hard to deny that the plot is, at least in its broadest thematic strokes, a pretty familiar affair. What makes the enterprise worthwhile is its humorous execution. This isn’t a spoof of the genre, more a satirical mash-up of familiar fantasy building blocks and modern life. So, for example, the king’s chief knight is also a pop star, followed around by a gaggle of adoring female fans; when Jennifer finds herself in need of money, her dragonslaying assistant signs a sponsorship deal with soft drink brand Fizzipop that requires her to film an advert, make at least two promotional appearances, and wear a branded T-shirt until the dragon is slain. It’s this whimsical slant on our world that is arguably Dragonslayer’s most successful aspect.

Another would be its characters. Chappell makes Jennifer a capable hero without having to resort to the kind of self-serious moping that dogs so many current young adult leads (Katniss, I’m looking at you). Buchan also gets to move away from the moping that’s so often called for in series like Broadchurch, making the affectionate, skilful Zambini an easily likeable character within just a few deceptively simple scenes. Without meaning to spoil the plot, he’s not in it enough. The slack is taken up by the likes of Pauline Collins and Ricky Tomlinson as a pair of batty magicians, Matt “Toast” Berry as the immature monarch, and Anna Chancellor as the smarmy corporate head of supermarket giant Stuff Co. The only weak like for me was Richard E. Grant as the voice of Maltcaisson, the last dragon — it just didn’t feel like he had the vocal presence to be playing a huge majestic beast. But not everyone can be John Hurt or Benedict Cumberbatch, I suppose.

I guess The Last Dragonslayer’s irreverent, sometimes silly tone won’t be to all tastes, but I enjoyed it very much. Unsurprisingly (all things considered) the book is the first in a series, and so not everything is fully resolved by the film’s end. Let’s hope that, in spite of their scheduling, it’s done well enough for Sky that sequels are forthcoming.