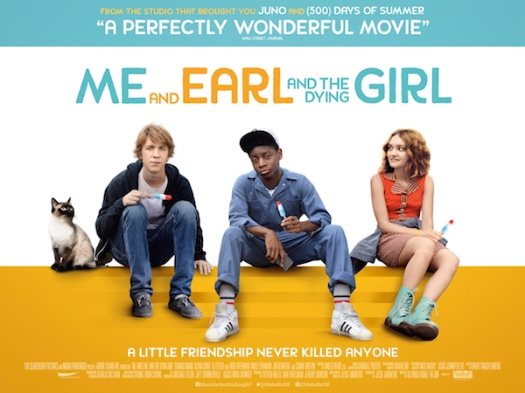 This is a film about a high school student who makes movie parodies for fun, who befriends a dying girl. It won the Audience Award at Sundance. I’m not sure there’s any other knowledge you need to judge if you’ll like this movie or not. Except normally that’d have me thinking “oh God, here we go,” but I liked it enough to put it in my Top 20 of last year.

So, I admit, I went into the film feeling pretty cynical about it. I was expecting to find a movie tailor-made to be an indie cinephile’s dream comedy-drama. There are elements of that about it, but I must also admit I ended up being won round and affected by the film, to the point of feeling quite emotional and often a little teary for, ooh, most of the second half. Was I just manipulated into feeling that way? Well, that question is a fallacy. All film is emotionally manipulative, because it has been constructed to achieve a purpose, and the people who complain about feeling manipulated by sappy dialogue or heavy-handed music or whatever have just seen behind the curtain, as it were. For these reasons it kind of annoys me when critics or ‘film fans’ get annoyed about a film being “manipulative”, but maybe that’s a rant for another time.

Anyway, as I was saying, I kind of didn’t want to like Me and Earl and the Dying Girl because I didn’t want to fall into the obvious trap of “this movie totally gets me because I love Criterion editions too!” But I thought it worked in spite of those pandering affectations. Or maybe I just couldn’t resist them on a subconscious level? In some respects it doesn’t matter how it achieved it: the film wanted to make me feel a certain way, and I did feel that way — success.

Perhaps another reason it worked for me was the positioning of Greg (the titular “Me”) as a high school “Everyman”, not affiliated with any of the school’s multitudinous social groups. I don’t think I’ve seen that in a film before. What movies (and TV) have taught us about American high schools is that they are chocka with rigid cliques, and everyone belongs in one group or another. Is that true? I have no idea — but as far as movies (and TV) are concerned, yes it is. I don’t think it’s the case out in the rest of the world (well, at least not in the UK); not so rigidly and antagonistically as it’s depicted as being in US high schools, anyway. Nonetheless, I could identify with Greg’s status as someone able to drift around groups being generally well-liked but also almost entirely unnoticed, which perhaps helped me buy into him and his emotional journey a little more, thereby explaining the film’s ultra-effective emotional manipulation effect. 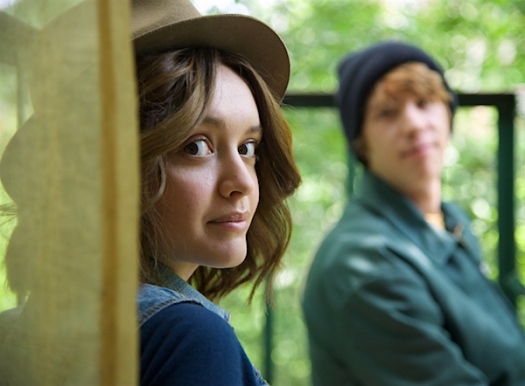 A lot of what works lies in the performances. As “the dying girl”, Rachel, Olivia Cooke is fantastic. She’s got the showy role, but manages to play it with subtlety. Instead of the usual indie movie Manic Pixie Dream Girl, the lead character / narrator is the Quirky one and she’s a cynical girl who undercuts him, which is kinda fun. Nonetheless, as the film’s “Me”, Greg, Thomas Mann has a less obviously showcasing part, but the way he handles it — especially as the film moves away from the “he’s a Quirky film fan who’s uncomfortable in high school just like you” aspect — is essential to how the film’s relationships and emotions function.

Nowhere is this better exemplified than in a two-hander between the pair: achieved in a single static shot that lasts five minutes, they don’t look at each other while they argue and their friendship struggles. It’s a frankly stunning scene from all involved: kudos to Jesse Andrews (who wrote both the original novel and the screenplay) for the plausible and complex dialogue; kudos to Alfonso Gomez-Rejon for the confident blocking of both actors and camera; kudos to both of the actors for their layered, emotive, but not grandiose, performances.

Several supporting cast members are also worthy of note: Jon Bernthal as a cool teacher; Molly Shannon as Rachel’s mom; and Nick Offerman for once again perfectly judging the level of funny his character needed to hit to be comic relief but also stay tonally consistent with the rest of the film.

A final stray thought before I wrap up this rather bitty review: I’ve read a few comments that make a point of mentioning this is not like all those other “teen death” movies, or that if you’re sick of all those then this one’s still good, and so on. I’m kind of aware these “teen death” movies exist and that there’ve been a few, but I’ve never bothered to watch one (because, frankly, they’ve all sounded rubbish), so I am immune to any overkill other viewers may experience. But if there’s a lesson here (and I’m not saying there is) it would be that you don’t have to watch every high-profile film that comes out (unless you’re a critic and being paid to do it).

Me and Earl and the Dying Girl placed 14th on my list of The 20 Best Films I Saw For the First Time in 2016, which can be read in full here.