The character in question is Louis Bloom (Jake Gyllenhaal), a young man who, like so many in modern America, struggles to find paid employment. Indeed, as the film opens he’s resorted to stealing fences to hawk to scrap metal dealers — and, when cornered by a security guard, also resorts to violence. That’s the kind of man Bloom is, which will become important as the film goes on. On his way home he comes across the aftermath of a near-fatal car accident, and witnesses the freelance news cameramen rushing to the scene. For some reason this job strikes Bloom as glamorous, so he buys a camera and a police scanner and throws himself into it. His boundary-pushing enthusiasm soon puts him on the way to success, racing around nighttime L.A. chasing bloody imagery. It’s a cutthroat industry, but Bloom is prepared to go pretty far for exclusive footage…

Any well-informed viewer isn’t likely to glean much from Nightcrawler about the state of modern America. That Bloom is desperate for employment is more of an inciting incident than a dissected issue, though it does also partially fuel a subplot when he employs an assistant. That US TV news is all about shock value — “if it bleeds it leads” — is a truism that’s decades old, too. If the film contributes anything to that discussion it’s to wonder if things have reached a nadir. Writer-director Gilroy says he was trying to tell an objective and realistic story, but it’s coming from a very cynical, almost satirical place about TV news. Or maybe local US news really is that extreme, I don’t know. Either way, this observational stuff isn’t bad, but nor is it revelatory. 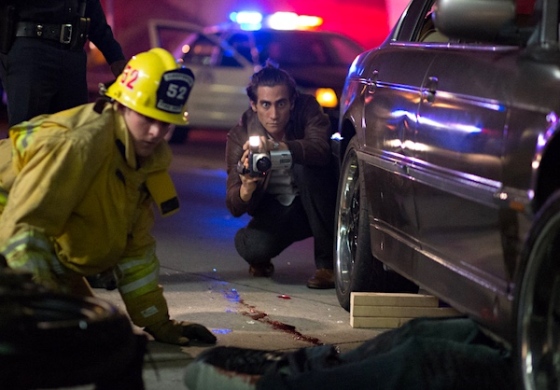 Where the film really flies is in its characters. There are impressive supporting performances, from Riz Ahmed as the uncertain and kinda gullible young guy Bloom employs as his assistant, and Rene Russo as the outwardly confident but actually kinda desperate TV news producer Bloom sell his work to; plus an almost cameo-level appearance by Bill Paxton as a rival nightcrawler who rubs Louis up the wrong way.

But the film belongs to Gyllenhaal. Wild-eyed, eager to please, but not quite right in how he interacts with other human beings, and with a real thirst for the gory profession he lands upon, Bloom has a sense of morality that is quite removed from the norm. From the start we’re in no doubt that this is a guy prepared to take relatively extreme measures to secure what he wants, but how far will he go? As he begins to establish himself as a respectable businessman — or, at least, someone who wants to be thought of as respectable — how much has his attitude changed, if at all? Gyllenhaal immerses himself in the role, skilfully negotiating Bloom’s swings from smarmy charm to emotionless non-engagement with the horrors he films. He’s physically transformed too: he lost weight, didn’t eat, and stayed up nights in preparation for the role. On the Blu-ray, Ahmed comments that the literal hunger Gyllenhaal was enduring contributed to his performance as a guy who is so hungry (for success) he’ll do anything necessary to achieve it.

(Talking of the Blu-ray, its only special feature (aside from an audio commentary) is a five-minute featurette that briefly features the two real-life nightcrawlers who consulted on the film. They share a couple of quick anecdotes about what the real job is like, which is quite fascinating — it’s a shame there’s not a fuller feature about those guys and their work. I don’t know if it would sustain a whole feature documentary — maybe it would — but a decent-length DVD extra would’ve been nice.)

Outside of its characters, Nightcrawler impresses with technical merits. The lensing of nighttime L.A. by DP Robert Elswit is highly evocative, a netherworld where flashing red-and-blue lights illuminate scenes of carnage. The film’s pace is apparently unhurried but constantly engrossing. You’re not exactly sucked into this world alongside Bloom (Gilroy’s right that presenting him as unnecessarily aggressive upfront serves to stall sympathy from the viewer), but you become an interested observer, unable to look away — like a rubbernecker at an accident, appropriately enough. Several scenes, especially in the film’s second half, generate a level of nail-biting tension, while a climactic car chase is an action scene for the ages. Gilroy’s brother Tony, a producer on the film, was one of the architects of the Bourne franchise, and you wonder if he brought some expertise to the realisation of that sequence. This isn’t a film for adrenaline junkies on the whole, but that scene is a kick.

Driven by a sharp character examination from writer-director Dan Gilroy, brought to life in a compelling, committed performance from Gyllenhaal, Nightcrawler is an appropriately cynical exploration of modern morality as embodied by one outsider, moulded in the shape of a fantastic noir thriller.

The UK TV premiere of Nightcrawler is on BBC Two tonight at 9pm, after which it will be available on iPlayer.

Nightcrawler was viewed as part of my What Do You Mean You Haven’t Seen…? 2017 project, which you can read more about here.