Anyone who’s watched a Fast & Furious movie will know that the most important thing to our heroes is not fast cars but family. Family, family, family — they don’t half go on about it. But what might make one of the team betray their all-important figurative family? Well, that’s what the series’ eighth instalment sets out to ask, as patriarch Dom (Vin Diesel) is forcibly recruited by terrorist Cipher (Charlize Theron), and government agent Mr Nobody (Kurt Russell) counter-recruits Dom’s family to track him down and stop Cipher’s evil plan.

You may remember that, once upon a time, these films were about street racers who occasionally carried out on-the-road heists, all the better to keep the focus on the cars. Those days are long gone, despite an opening sequence here that tries to pretend that’s still part of the game. No, nowadays we’re in the “international spy actioner” genre, and our former street racers have somehow become highly capable agents… whose primary tools/weapons are still vehicles. It’s utterly ridiculous… but, thank goodness, everyone involved seems to know that.

Well, most people do. I reckon Vin Diesel might think it’s a serious movie about the emotional turmoil of being kidnapped by a global cyberterrorist who lives on a plane and can remotely hijack a city-load of cars and is threatening your family unless you help her steal a nuclear submarine. I mean, we’ve all been there, right? 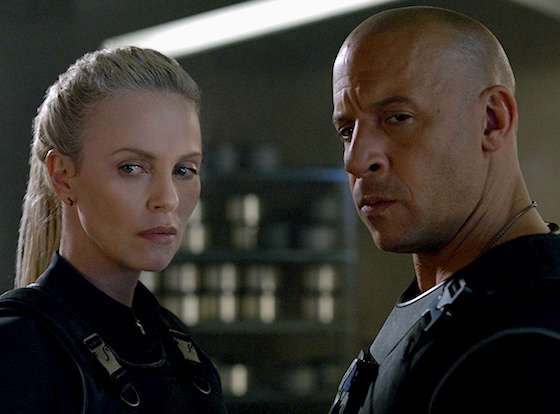 So, yeah, the story is thoroughly daft. But it exists primarily to connect up action sequences, and in a movie like this I’m fine with that — I’m here to watch people do cool shit in cars, hopefully with some funny bits around that action, not to be wowed by an intricate plot or ponder meaningful character development. On the things I expect, then, FF8 more or less delivers. I mean, the series has always been renowned for using CGI to augment its car chases, which is less thrilling than doing stunts for real, but it really blurs the line nowadays: you might think dozens of cars falling from a multi-storey car park is all CGI, but you’d be wrong.

Any time almost anyone besides Hobbs (Dwayne Johnson) or Deckard (Jason Statham) has their mouth open, FF8 is pretty dumb; but when those two are talking, especially when they’re bickering with each other, it’s often pretty funny (they’re definitely in on the joke). And when the action’s a-go-go, the film’s either solidly pulse-racing or, actually, being kinda witty — there’s a prison riot, for example, that is, appropriately enough, a riot. Though it’s as nothing to Statham engaging in a protracted gunfight-cum-punch-up against a bunch of goons while carrying a baby. 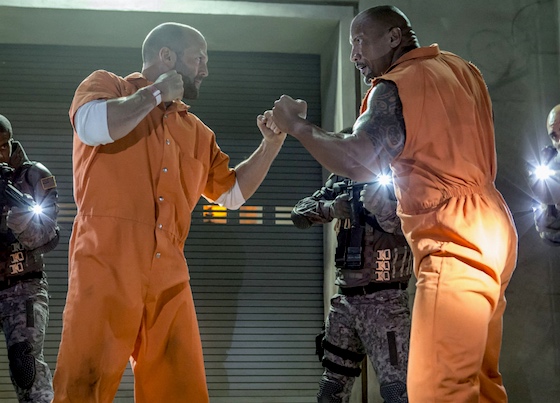 Fast & Furious 8 isn’t strictly a comedy, but a sense of humour is required to enjoy it. There’s no way to take this palaver seriously, and fortunately the filmmakers have embraced that. It’s deliberately OTT, dedicated to being entertaining for almost every minute of its running time. Taken as just that, it’s a lot of fun. Also, probably the series’ best instalment since the fifth.

Fast & Furious 8 is available on Sky Cinema from today.