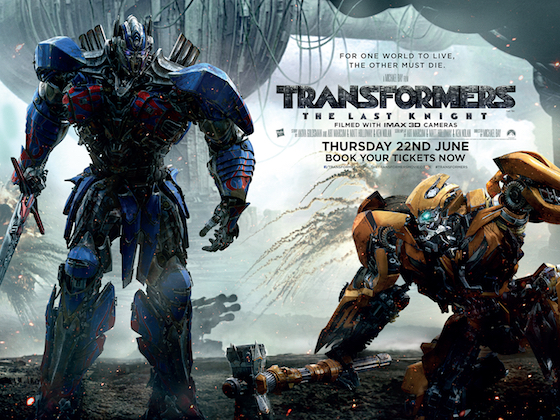 Here we have the fifth Transformers film in 11 years from director Michael Bay. At this point you ought to know what you’re getting — the style hasn’t fundamentally changed since at least the third movie, arguably since the first, so if you dislike those then most probably there’s nothing for you here. I say “probably” because I’ve seen at least one review from someone who despised the fourth film but enjoyed this one, so clearly there’s always room for variability.

We’re dealing with variations on a theme, then, and The Last Knight brings a few fresh-to-the-franchise plot spins to add a different flavour and texture this time out. Firstly, a prologue tells us that Transformers were already in England about 1,600 years ago, when they fought alongside King Arthur and Merlin, the latter of whom didn’t wield magic but actually Autobot technology (and is played by Stanley Tucci, hamming it up something rotten). This relates to the present day because… well, I could explain it to you, but it gets fiddly and, frankly, if you care then you’ll find out when you watch it. But, basically, in present day America Transformers are hunted and Cade (Mark Wahlberg) is an outlaw helping hide some of them and rescue others. When a MacGuffin from Arthurian times attaches itself to him, he winds up on his way to England to meet Sir Anthony Hopkins, the last in a long order of… oh, yeah, I said I wasn’t going to explain it. Anyway, only Marky Mark and Clever English Totty (Laura Haddock, playing the kind of Oxford professor who dresses like a secretary in a porn film) can save the world. Who do they need to save the world from? Optimus Prime! Dun dun duuuun! 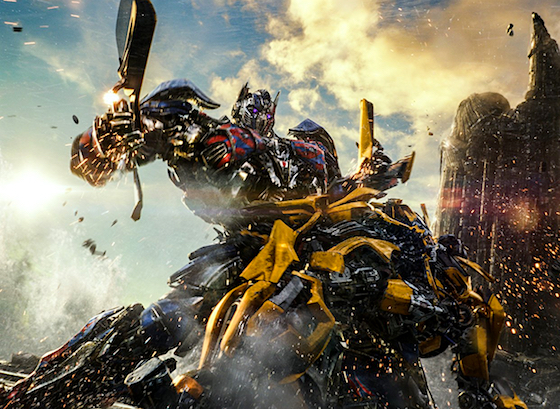 It’s all nonsense, of course, but then the inherent concept of Transformers never made any sense so what does it matter? Adding in Arthurian legend and making Optimus Prime a baddie doesn’t make it any dafter than it already was. And that’s only the half of it — there are more disparate story threads and subplots than a particularly complicated miniseries. Despite being shorter than the last movie, it’s still indulgently long — and needlessly so, too. There’s a ton of stuff that could be cut to streamline the plot, from individual shots and lines (the Arthurian prologue is probably twice as long as it needs to be) to whole characters (a street girl Cade basically adopts, Izabella, contributes nothing of major significance in the end). After about an hour, the story basically stops and starts again — that’s how long it takes to get to Sir Hopkins. Stuff from the first hour remains relevant, certainly, but I’m sure there were other ways to handle it. By getting through the first hour of the movie in half the time, for one thing. For another, don’t introduce major-seeming characters that you’re then just going to set aside and ignore for the next hour while you introduce whole new ones.

It’s remarkable how the Transformers movies can have way too much plot and not enough plot all at once. If you want to follow it you have to pay attention, not only because there’s a lot of mythology to take in, but also because Michael Bay chops it all up into bite-size chunks amongst frenetic action sequences. The film is cut like one long trailer — but that’s been Bay’s MO for a while, so, as I said at the start, no one should be surprised. It remains, in its own way, impressive. As I previously said in my review of Age of Extinction, it’s almost avant-garde: a tumble of images and sound that give you an impression of what’s occurring rather than straightforward traditional storytelling. And I say it’s impressive because it must be so much work to create — all the camera setups involved; events staged for a single, fleeting, couple-of-seconds shot; and then edited together with non-stop dynamism, rarely pausing for any notable period. 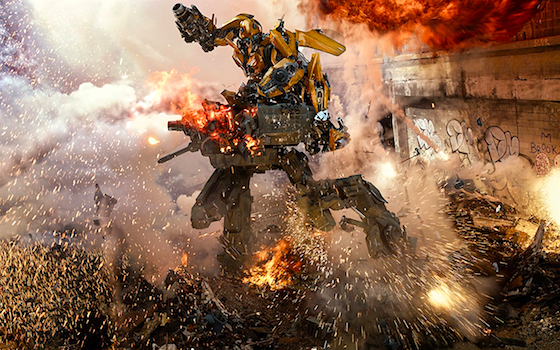 And if you think that’s mad, wait until you see how Bay uses aspect ratios. Thanks to Christopher Nolan and The Dark Knight blazing a trail, we’ve now had a fair few movies that use the IMAX format for select sequences, and emulate that on home media by allowing the aspect ratio to change — for laypeople, that’s when the black bars at the top and bottom disappear and the picture fills the screen. As I say, generally this is used for specific sequences, or occasionally for a particularly grand individual shot; and usually there are two ratios, approximately 2.40:1 (with the black bars) and approximately 1.78:1 (without). Bay uses… more than that. And he does so almost indiscriminately. They’re so all over the place that you can’t miss them. Like, there are standard shot-reverse-shot conversations between two characters, but each character has a different aspect ratio… and then, as if that wasn’t bad enough, halfway through the scene one side will switch to another ratio! It just leaves you wondering why and how it ended up this way. What was the intention? What was the point? Well, that’s not a new question with Bay — he still uses five shots when one would do, so why not extend that same thinking to the film’s aspect ratio?

Despite the faffing around, much of it still looks impressive in a purely visceral sense. Like every modern tentpole, it cost a fortune to make ($217 million), but at least it looks like it did: there are so many grand sets and large-scale set pieces, much of it built or performed for real — not the giant robots, obviously, but there are car chases and human stunts and so forth that they did in real-life rather than in a computer. The money is splashed all over the screen, to the nth degree. Is that inherently a good thing? Eh. But it makes you wonder where some other $200m+ movies spend their money — especially when you consider that apparently production difficulties resulted in a lot of material being filmed but never making it into the final cut. How much? Well, supposedly a whole hour of footage was ditched from the original cut to get to the theatrical version. As I’ve already said, the film’s too long as it is, but it’s a shame there are no deleted scenes available because I’d be kind of fascinated to know what more was meant to be there, and to see how much money it looks like they wasted on it. 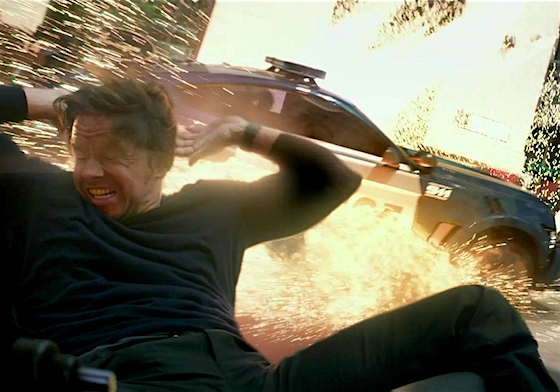 In what we did get to see, the size of the endeavour and the impressive quality of the imagery is emphasised by how it was filmed. A large proportion of the movie was shot in IMAX 3D (apparently 98%, but I’m certain there was more than three minutes in non-IMAX aspect ratios), and there are innumerable moments that benefit from the depth and scope of the format. Post-conversion has come a long way, but I’m not sure it can always equal doing it for real, especially on a format with the quality of IMAX. That said, the visual splendour didn’t strike me as much as it did in Age of Extinction. Perhaps that’s because, as Richard Brody put it in his New Yorker review, Bay’s “sense of speed works against his sense of scale and of detail. All the best moments in the movie — pure images, devoid of symbol and, for that matter, nearly empty of sense — go by too fast, are held too briefly, are developed too little.” There are some great shots in here, but the rapid editing just races past them. If you wanted to find and appreciate the shots fully, you’d have to damn near go through the whole thing frame by frame. I’m not sure they’re that good.

Although Bay and his directorial style always get a critical slating for these movies (more so than others he’s made in the same period — Pain & Gain and 13 Hours both attracted a reasonable amount of praise), they let him keep making them, and he keeps wanting to. The former makes sense: although you rarely find someone who admits to liking them, they keep making money (The Last Knight is the series’ lowest grosser worldwide, thanks to a particularly poor US showing, but it still took over $600m). As for the latter… no, I don’t know why he keeps coming back. Can you think of another blockbuster-level director who’s made five films in the same series? No one instantly comes to mind for me, and even those who are close (Lucas with Star Wars; Spielberg with Indiana Jones) did so over a long period of time with many films in between. I mean, if Bay wants to do it then why not — it’s his life and career — but I don’t quite understand it. 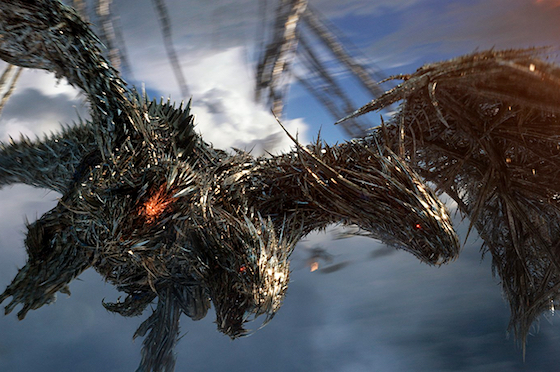 As I said nearly 1,500 words ago (I never imagined I’d have so much to say about this movie — and I haven’t even mentioned the three-headed robot dragon, or the C3PO-alike comic relief butler), everyone should know what they’re getting with the Transformers films by now. The Last Knight shares the same pros and cons as the other entries in the series, to one degree or another — by which I mean that, for instance, I found the plot a little more coherent than last time (though still totally barmy), but I wasn’t quite as bowled over by the visuals (which are at least half the point of these films, I feel). On balance, I’d say it’s one of the franchise’s better instalments.

Transformers: The Last Knight is available on Sky Cinema from today.

* The listed ratio for The Last Knight is 1.90:1, because that’s the tallest, but its shifts into various other ratios are very obvious, as I discuss in the review. The three I’ve listed are the most obvious, but one of the trailers was shown to use eight slightly different ratios, so who knows how many there really are? ^