Murder abounds in this month’s reviews: Jessica Jones and Cormoran Strike are both on the trail of killers with a personal connection; Shetland’s top cop has deaths old and new on his hands; and Lucifer offers weekly homicide with a fantasy spin.

Meanwhile, the only thing getting murdered on Nailed It are the recipes. 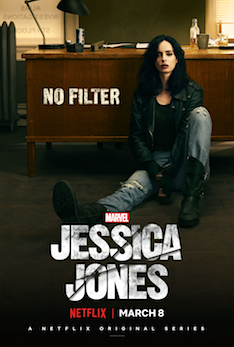 When the first season of Jessica Jones debuted 28 months ago it was practically a cultural phenomenon. Its fresh, unique take on the superhero genre marked it out as noteworthy even at a time when there are innumerable other films and series in that space. A large part of that was the intelligent and grounded way it engaged with some thorny issues, making it a critical darling and attracting audience admiration too. So I’ve been a little surprised that no one really seems to be talking about season two. Perhaps it’s just me and my little internet bubble, but since the flurry of pre-release reviews I’ve heard nary a whisper. I’m sure there must be reviews and recaps out there, which I wasn’t seeking out so as to avoid spoilers, but I didn’t stumble across any either.

Anyway, this season sees Jessica and co on the trail of the secretive medical organisation who gave her superpowers. I suppose saying any more than that might count as spoilers, depending on your point of view — they structure these seasons like novels, or long movies, meaning explaining the setup for the overall narrative can see you giving away things that don’t happen for three or four episodes. I mean, for example, in season one Kilgrave didn’t even appear until something like episode three or four, and wasn’t a major presence for another couple of episodes. A similar thing goes on this season. Some people criticise this form of storytelling on a fundamental level, wanting a more episodic approach, but it’s how these shows function — if you don’t approve of it, their very form will always offend you. You either give up on them, or take it at face value and roll with it. Sometimes it does make it feel like they’re moving too slowly, but there is a structure to the thing when viewed as a 13-hour whole.

It’s a worthwhile caveat to note that I watched the season in five multi-episode clumps over the course of five days. You definitely get a decent chunk of story when you watch several episodes back-to-back. It would play differently if spread more thinly, I’m certain, but whether that’s a negative (making everything feel slower) or a positive (allowing more time to process each beat of plot and character), I couldn’t say. Nonetheless, I would say that giving the pace a kick up the arse wouldn’t hurt. 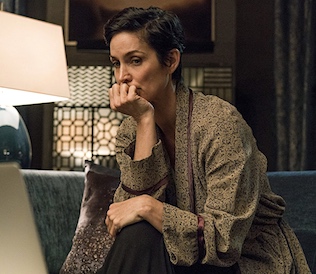 And that’s not to say these series never work in episodic form. For instance, events at the start of episode five, AKA The Octopus, see Jessica begin to force herself to be a better person. It’s one of the season’s strongest episodes, in part because of this burst of character development. Okay, it’s a bit blunt, in that she’s told she needs to improve and we see her consciously trying, but it pays off in a scene where she has to be empathetic to question a mentally-impaired witness. It’s not only Jessica who benefits from development: supporting cast members like Malcolm, Trish, and Jeri get meaty subplots to tuck into. Jeri’s is the best — indeed, her storyline might be the strongest bit of the entire season. There’s a fantastic, nuanced performance from Carrie Anne Moss — it feels like they’ve really worked to make use of her in a storyline that’s far more emotional and nuanced than what she’s had previously in these shows.

Conversely, Trish’s storyline feels slapdash. She falls off the wagon… until she runs out of her new drug, after which she’s fine. Well, more or less, because then they make it all about how she’s envious of Jessica’s powers. That’s a fine thread to pull — it’s been there all along — but some of the steps she takes as a result… it feels a bit much. Fundamentally it’s a good idea for her subplot, but I’m not sure it’s been well enough executed.

As for the main story thread, although the season starts off in the mould of a superhero thriller (like most of these Netflix/Marvel shows), around the halfway mark it morphs into a family drama. A family drama where people have superpowers, and get shot, and debate the ethics of murder and running away to non-extradition countries, but, y’know, some families are unique. It also does the material the courtesy of digging into it. Several times the season reaches what looks like an ending, and in other shows would be, then pushes past it into what happens next; the psychological reality for these characters. That’s what the whole season is about, really: these characters as people, not as heroes or villains or whatever. 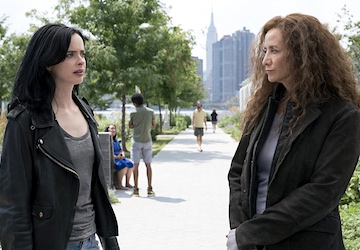 For me, it lost its way a bit again in the final pair of episodes — there are still really good bits, but others feel like a wearisome rehash of plot beats familiar from other superhero/thriller series. Eventually it comes to a good ending — there’s a surprising resolution to the plot, plus an epilogue that lays some intriguing hints for a third season (an inevitability, surely?) — but the faffery of episodes 12 and 13 to get us there… there were more streamlined ways to do this, I think. Or, considering the mandated episode count they have, more interesting ways to have spent the time. So it’s not perfect, but it’s still one of the best of the half-dozen Netflix/Marvel shows. 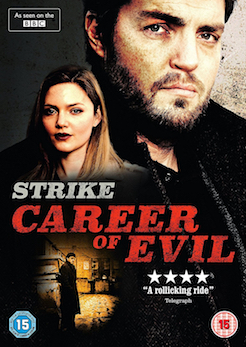 The latest Strike adaptation (and the last for at least a couple of years) was the best so far, I thought — a mysterious, reasonably complicated case, and plenty of character stuff for our likeable pair of heroes, too. The latter is certainly a big part of the series and its appeal, sometimes to the detriment of the actual investigation storyline, I suspect. By which I refer to the fact that some fans of the books have complained that the series isn’t devoting enough time to each adaptation, necessitating big cuts to the plot to fit into just two hours. I’ve not read them myself, and such editing didn’t feel noticeable during the first series, but Career of Evil did feel a little hurried at times. It’s hard to deny that the BBC have raced through their adaptations a little too fast. And now we have to wait goodness-knows-how-long to find out if Robin manages to stay married to her new husband. At the start I thought this would be a series that avoided the clichéd will-they-won’t-they between the male and female leads, but clearly it isn’t. Really, I don’t care too much if they get together or not, but her husband’s a bit of a dick and I look forward to her ditching him. 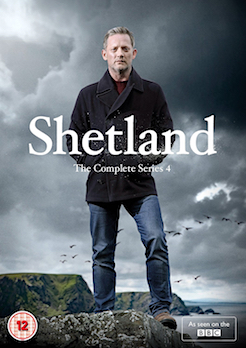 In almost the polar opposite to Strike, Shetland is no longer based on the books that inspired it (even though I believe there are one or two they’ve not adapted), and it takes a whole six episodes to tell its story. Actually, I feel a bit daft calling Strike’s case “complicated” now, because it’s as nothing to this series of Shetland, which sees DI Perez and his team struggling with both a 23-year-old cold case, which has resurfaced because the convicted murderer has just been awarded a mistrial, and a new murder with clear echoes of the first. If that wasn’t enough, the investigation leads them to Norway, where both the suspicious activities of an oil drilling firm and the plotting of a far right nationalist group come into play. Shetland has always had a bit of Scandi Noir about it (must be something to do with the cold northern environs), but it strays even further into that territory by, you know, actually going there.

All this while dealing with the continued fallout of events from last series in a respectful, mature, understated, and relevant manner. It might look like “just a cop show”, but there’s some depth here; and when everything finally comes together and the truth is revealed in the final episode, there are some revelations and developments that really hit home — it’s sad and horrifying, without wallowing in it or going tonally overboard. Good news: a fifth series has already been commissioned. 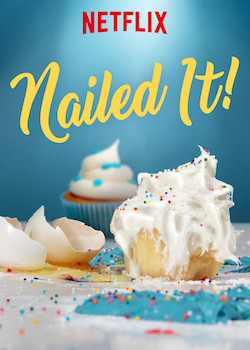 Not a reality show about manicurists (that’s what it sounds like, doesn’t it? If I was making a reality show about manicurists I’d be annoyed this took my title), but rather Netflix’s answer to The Great British Bake Off (possibly literally: they were miffed they didn’t get a chance to bid for it when it went to Channel 4). It’s not about super-skilled amateur bakers, though, but rather normal folk who attempt the kind of grand bakes you sometimes see online… and fail miserably. It’s like that bit of An Extra Slice where they look at viewers’ photos, only turned into a whole programme. It’s also very American — brash, loud, fast, unnuanced… It’s also the way it’s shot and edited, very much more like American reality series than British ones, but I shan’t bore you with a Media Studies-esque explanation of that.

So, for all those kinds of reasons, the first episode nearly put me off, but I stuck with it and it turns out it’s quite fun once you get used to it. It’s not as nice as Bake Off, but they’re not mocking the contestants either. Sure, they want them to mess up (they’re given ludicrously tight deadlines and bloody hard bakes), but it’s in a spirit of fun. Another difference between the UK and US shows: on Bake Off taste and decoration are equally important, leaning towards the former; on Nailed It, they do taste the bakes, but all that really matters is how they look. I mean, if you could distill what the rest of us think of as Americanism into a baking show… 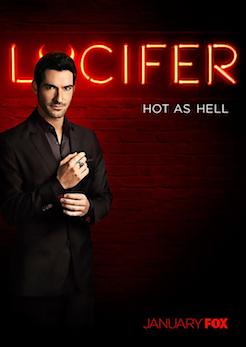 Having finally finished Castle last month, there was a gap in our viewing schedule for a light crime-of-the-week cop show. Lucifer seemed to fit the bill. For one thing, it’s been knocking around for a few years now, meaning there’s a nice backlog of episodes to get through. Loosely inspired by a DC comic, it’s about the actual Devil quitting Hell and setting up a life in Los Angeles, where — for one reason or another — he ends up helping the police investigate murders. Meanwhile, he enters therapy, and there’s an angel knocking around who wants to drag him back to Hell. The series nicely balances the bog-standard US-cop-show case-of-the-week stuff with the ongoing fantastical subplots, powered by a cast of engaging characters with conflicting motives. Best of all is the lead, Tom Ellis, giving a deliciously charming and slightly camp turn as the Prince of Darkness himself as he tries to become a better person. I’m not sure the series has really made any waves (especially on this side of the pond, what with it being an Amazon Prime exclusive here), but it’s really rather good. I mean, it’s not going to be challenging Quality TV for greatest-of-all-time status — it’s still a case-of-the-week buddy show when you boil it down — but it’s done well and a lot of fun.