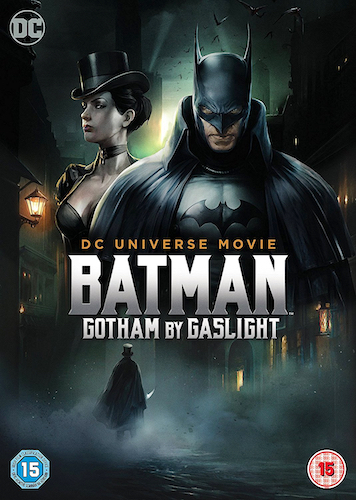 I was all up for this adaptation of Gotham by Gaslight when it was first announced — I’m a fan of the original book, as well as the sequel (which they’ve also used parts of); and, I thought, even if they chose to deviate from it then I like the basic concept of “Batman meets steampunk”. But then the last few DC animations I’ve seen have been subpar, and the trailer for this one looked rather bland, so I decided to opt for a rental instead of purchase. Well, I never got round to doing that, and then Amazon slashed the price of the Blu-ray, so I ended up buying it — it still cost more than a rental, but if I liked it I’d save money in the long run. Fortunately, that turned out to be the case.

If you’re not familiar with Brian Augustyn and Mike Mignola’s original tale, it involves Batman battling Jack the Ripper in late 19th Century Gotham City. It’s regarded as the first Elseworlds story, which is DC’s branding for stories that take place in different times, places, or “what if” scenarios — “what if Superman had landed in Russia?”, for example. This animation is a rather loose adaptation, which takes the basic concept from Augustyn and Mignola’s work but otherwise almost completely rebuilds it, mixing in a lot of ‘Easter egg’ stuff (like appearances from many more well-known Bat-characters) and some elements of the sequel comic, Master of the Future. 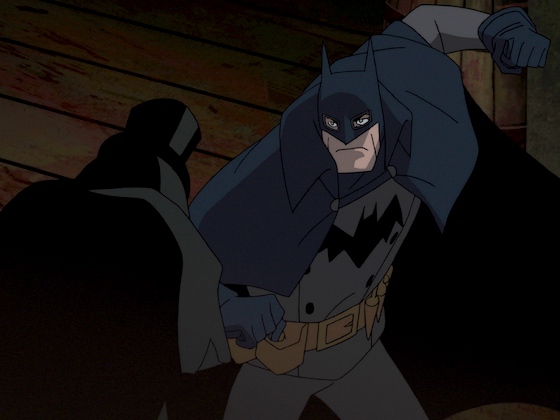 So anyone expecting a straight-up adaptation may be disappointed, but taken as a film in its own right, for the most part it works. Having all the different familiar characters pop up makes it feel like a proper Batman tale, rather than a Ripper story that happens to have a costumed vigilante in it. Most prominent is Selina Kyle, aka Catwoman, although she isn’t really the latter here — Batman gets fully suited up, but the most Miss Kyle gets is a whip. The relationship between Bruce Wayne and Selina is one of the film’s best aspects, in fact, with the Elseworld setting seeming to allow a different focus than the usual antagonism that pairing has in screen adaptations — as one of the filmmakers says in the audio commentary, “it’s not a movie about Batman and Catwoman, it’s about Bruce and Selina.” Jim Krieg’s screenplay is good across the board, with several nice passages and scenes, even if at times it rests too heavily on exposition and speachifying.

The one change that didn’t work for me is that it glosses over the bit about Bruce have recently returned from Europe, his return to Gotham coinciding with the Ripper’s arrival, thus making Bruce Wayne a suspect. Perhaps this isn’t a major point, but it’s a grace note that helps sell the whole concept for me. This wasn’t an oversight, however: they consciously decided to make Jack the Ripper a Gotham serial killer in this universe, so his London crimes never happened. But surely the point of using Jack the Ripper is the crimes he’s famous for? I think everyone knows he was a London serial killer, but the film does nothing to dispel this prior knowledge, nothing to establish that this version emerged for the first time in Gotham.

The idea behind the change was to widen the suspect pool for the “whodunnit” element — if the Ripper had just come from London, his identity has to be someone who’s just arrived in Gotham. I can see where they’re coming from, but there are other ways round the problem — for example, the Gotham Ripper could’ve turned out to be a copycat, which would’ve added to the twist. As it stands, the identity of the Ripper (which has been changed from the book) is a huge twist, and, fair play to them, they pull it off. I’ll say no more because of spoilers, but I’m surprised it didn’t seem to cause outcry online. Maybe after the furore around The Killing Joke people just stopped paying attention. 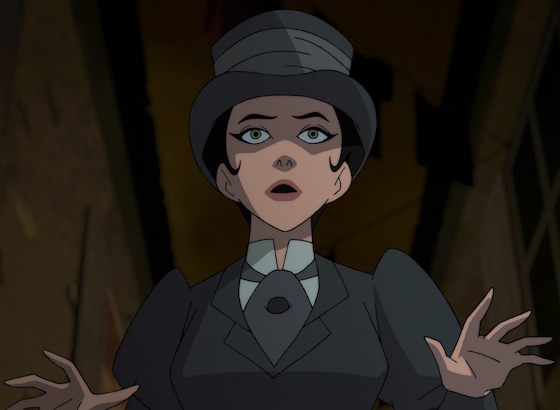 As with most of these DC animations, the quality of the visual is more TV than feature film, but they make the most of what they’ve got. There’s a squareness to the character designs, using few and simple lines, that is almost appealing. Perhaps it was inspired by Mignola’s artwork, though it does still feel sanitised compared to his exaggerated style. Also, a lot of effort is put into establishing this version of Gotham, with plenty of wide shots and scenes set in many different locations. Those were both deliberate choices to help make the city a major part of the film, and to give it life and texture as a Victorian metropolis. It’s an admirable effort considering the new era was a bit of a production headache: on their other movies, things like generic background characters and props can be recycled from film to film, but here every single element had to be designed and created from scratch.

Voice casting is mostly spot on. Again, effort was put into evoking the period without wanting to go overboard — they didn’t want the voices to sound modern, but they didn’t want everyone doing English accents or something either. Bruce Greenwood makes for a dependable Batman and Anthony Head is perfectly dry as Alfred, but the foremost performance is perhaps Jennifer Carpenter as Selina. She’s most famous for Dexter, where she’s such a tomboy, but here she conveys a kind of Victorian elegance, with a hefty dash of feminism, very well. Inspired casting. Just as good is Scott Patterson as Commissioner Gordon. Best known for his modern, working-class character in Gilmore Girls, I didn’t even realise it was him until the credits rolled. Well, partly this is a problem with billing — only Greenwood and Carpenter get it. They’re the leads, so of course they’d get top billing, but Head and Patterson have sizeable roles and are surely just as famous? I guess it doesn’t matter, but it was a bit of a surprise to hear a recognisable voice crop up when they hadn’t been announced (as it were) by the opening credits. 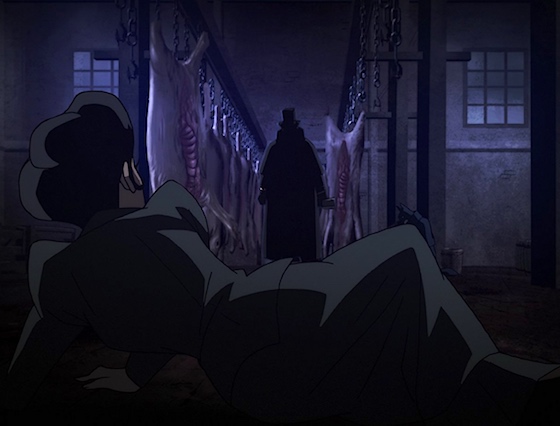 In other merits, there are some surprisingly decent action sequences — a mid-way one atop an airship is the highlight — plus a nice music score by Frederik Wiedmann, which was partly influenced by Hans Zimmer’s work on the Guy Ritchie Sherlock Holmes films, but I swear I heard some overtones of Danny Elfman’s Batman in there also. In all the film is only an hour-and-a-quarter long, but it doesn’t feel like too much of a quickie — there’s enough incident here to fuel a ‘proper’ movie. I mean that in a positive way.

As I said at the start, I expected very little of Gotham by Gaslight, for various reasons. I came away pleasantly surprised. In the commentary they talk about how much they enjoyed making it — how everyone involved, from the executives down to the storyboarders, all thought it was a particularly special project — and how they’d like to make a sequel, and they’ve got an idea for one involving the Joker. I’ve no idea how this has performed commercially, but I hope they get the chance.

Another Elseworlds-y Batman animation, Batman Ninja, is released on DVD and Blu-ray in the UK this week, and will be reviewed in due course.