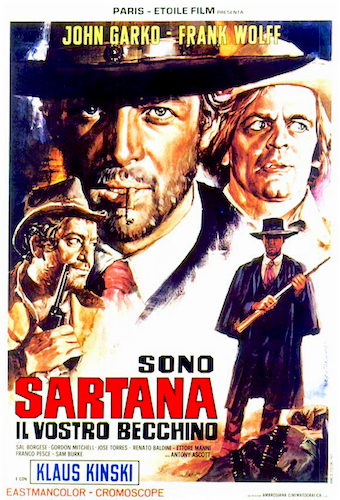 The second official movie to star Western antihero Sartana is, according to the blurb on Arrow’s Blu-ray release, “a more playful film than its predecessor, possessing an inventive visual style and developing its central character into a more creative and resourceful figure.” That’s bang on — and it’s a better film for it.

It starts with a bang, too: a bank robbery that turns into an action-packed shoot-out. The leader of the gang is posing as Sartana, which puts a price on our hero’s head. He sets about trying to prove his innocence and get his revenge, while three fellow bounty hunters set about trying to kill him.

Your Angel of Death is a lot slower paced than the non-stop action-fest of the first film, but that has its benefits: the plot is a lot clearer, and there’s more time invested in characters and non-violent set pieces (like Sartana’s card tricks), which I thought made for a more enjoyable watch overall. The storyline gives the film a “whodunnit” element, as the guy who framed Sartana is as much a mystery to us as it is to him. The film develops Sartana into a more interesting character, too, because his resourcefulness really comes out here. He doesn’t just shoot fast — he plans his strategy, uses objects as weapons in cunning ways, sometimes coming up with such things on the fly.

Of the three men after Sartana, only the one played by Klaus Kinski gets any serious screen time. Kinski was a bankable actor in these kind of movies at the time, and so after his cameo-sized appearance in the first film he’s back here with a bigger role, as a somewhat camp bounty hunter. There’s a sort of running gag where he’s terrible at cards, and knows it, but can’t help playing anyway, which is quite fun. As for the other two hunters, one is used for a decent shootout-cum-chase sequence early on, but the third is introduced alongside the other two only to disappear entirely until the final duel, which makes the finale somewhat anticlimactic. One nice touch, though: Sartana clearly has a longstanding professional relationship with all three men — comrades in the bounty hunter game, or something like that — which adds an extra dimension to their encounters.

The other standout in the supporting cast is Frank Wolff as Buddy Ben. Sartana initially thinks Ben might’ve set him up, but he was in prison at the time. From there he takes on the role of Sartana’s sidekick, kinda — we’re still not quite sure if he’s to be trusted, which is a nice dynamic. 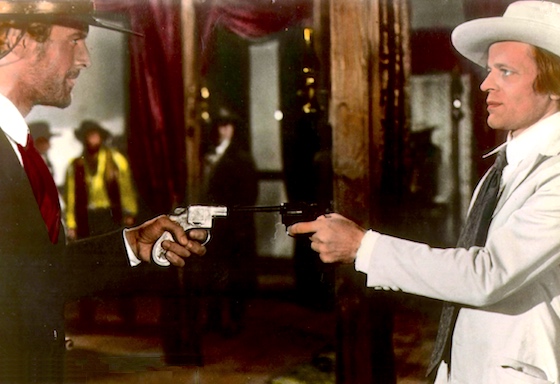 Giuliano Carnimeo’s direction is less remarkable than Gianfranco Parolini’s work on the first film… or so I’m told: every review seems to mention it, as does Arrow’s booklet. There are some nice flourishes, however, with the most obvious being that almost anytime someone is shot the camera dramatically tips over sideways, mimicking their death. Apparently the film’s more humorous and ironic tone is in keeping with Carnimeo’s style, in contrast to the more straightforward action of Parolini, and that’s a positive in my book.

Your Angel of Death was a more enjoyable experience than the previous film, which was very welcome because (as I mentioned in my previous review) I’d been slightly concerned that taking a punt on this box set would turn out to be a mistake. (Well, there are still three more films to go, so we’ll see!) That said, although there’s a lot of inventiveness and fun, it’s to the film’s detriment that it often feels a little slow. My score errs on the harsh side, then, but to go the other way would be generous.