I ended my last (ever so popular and entirely uncontroversial) TV column by asking, “what can possibly follow Game of Thrones?” Well, here’s the answer…

To get specific, this month’s column includes the first two seasons of BBC America’s big success, Killing Eve; the newest work from TV auteur Stephen Poliakoff, Summer of Rockets; the opening episodes of ITV’s new Downton-wannabe, Beecham House; and the latest season of internal affairs thriller Line of Duty. Plus the usual array of bits & bobs, and stuff I meant to watch but haven’t. (No Twilight Zone this month. It’ll be back.) 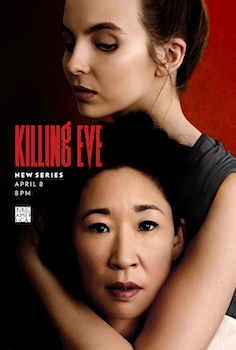 Adapted (loosely, I understand) from a series of novellas, BBC America’s Killing Eve is a spy thriller with a difference. Quite a few differences, really. That’s no doubt part of why it’s been such a success. Its US ratings aren’t huge, but it seemed to be talked about all over Twitter when it was airing there, and it went on to win some awards. When it finally made it to UK screens some five months after its US premiere, UK viewers went even bigger for it (it gets more than ten times as many viewers here as in the US, according to the figures I found), and it scooped up even more awards.

If you’re not familiar with it, it follows lowly MI5 agent Eve (Sandra Oh), the only person to spot a pattern in a string of unconnected murders. They have indeed been carried out by one person, assassin Villanelle (Doctor Foster’s Jodie Comer), a quirky, fun-loving young woman who brings that same attitude to her skilful kills. When Eve is appointed to lead an MI6 task force hunting Villanelle, the two women become fascinated with each other, and a strange bond grows between them.

The espionage thriller aspect is a mixed bag. There’s an early plot line about a mole that ended with the most obvious “could be a mole” character being ‘unmasked’ as a mole, but then there’s a lot more intrigue to be found in the secretive machinations of Eve’s MI6 supervisor (Fiona Shaw), Villanelle’s handler (The Bridge’s Kim Bodnia), and just who is employing Villanelle and why.

But, as written by Fleabag creator Phoebe Waller-Bridge (who served as showrunner for the first season), it all plays out with offbeat humour and a certain degree of comical groundedness — even as the life of an international assassin is as wildly improbable as, well, it is, Eve’s life is a recognisable world of church hall bridge clubs, wheelie suitcases, and microwaved shepherd’s pie. The comedy that arises from these culture clashes is a big part of the show’s charm.

The second season is still airing in the UK (people who didn’t even notice that five-month wait for season one got ever so het up when the US got the second run two months before the UK), so no spoilers here. Season two brings with it a new showrunner, and it does seem to lack some of that special spark in the writing, although to emphasise that as a criticism would be unfair: it’s still a lot of fun, and the cast know how to get the most out of the material. With Villanelle on the back foot and Eve diverted onto another serial killer case (a subplot which peters out long before it’s been used for maximum drama, sadly), there’s a different dynamic to the early part of the season. Later on (in the episodes that’ll air next month over here) things come together in new and surprising ways, which is more rewarding. It lacks the striking freshness of the first season, but it still has its moments. And, of course, it leaves things in an intriguing place for the already-confirmed third season. 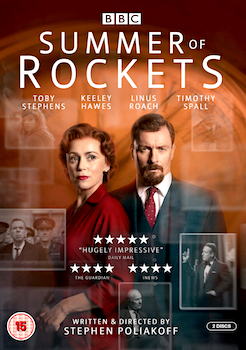 I’m not sure there are many people like Stephen Poliakoff working in TV nowadays — people who are seemingly given free rein to author standalone miniseries exactly how they want. I’m sure it’s more complicated behind-the-scenes than it looks from the outside, but it appears like Poliakoff’s reputation is solid enough that he’s allowed to write and direct with his own particular voice for entire six-episode stories. Honestly, I’ve skipped his last few, because I haven’t always found his work wholly engaging, but this espionage-tinged series sounded more up my street. Like Killing Eve, it’s an idiosyncratic take on the spy genre; though whereas that’s quirkily comical, Summer of Rockets is more rooted in period family drama.

It stars erstwhile Bond villain (and regular radio Bond) Toby Stephens as Samuel Petrukhin, a Russian-Jewish émigré who’s keen to be thought of as an Englishman but can’t quite escape his background in the highly structured society of the UK, especially as it’s 1958 and the Cold War is at its height. After accidentally befriending a society lady (Keeley Hawes) and her MP husband (Linus Roache), Samuel is approached by MI5 to feed them information about his new friends. But why? And are the men from MI5 actually on the level? Meantime, Petrukhin’s teenage daughter is being forced to attend society parties she has no interest in to help bolster the family’s status, and his son is being sent off to boarding school for the same kind of reasons. Apparently it’s semi-autobiographical — I guess that comes more from the latter subplots than the spying stuff. It all plays out with the pace and air of an auteur drama, making it feel a bit heavy-going and possibly impenetrable in its early episodes, but I warmed to it immensely as it went along. I love traditional, genre-based spy thrillers, but it’s also nice to see something that takes elements of that but plays it with a few different flavours.

It’s been a few years since Downton Abbey ended now, so it makes sense ITV continue to search for a replica of its success. I think Victoria ticked that box for a while, until its ratings sloped off against Poldark… and so now we have Beecham House, which mixes a bit of Poldark into the familiar period soap opera mix. There’s also some pedigree behind the camera: the series is co-created, -written and -directed by Gurinder Chadha of Bend It Like Beckham fame. I think it’s meant to be vaguely educational, too, as it’s set in a period of Indian history a bit earlier than we’re familiar with from other British Raj dramas.

Well, I’m not sure how successfully any of that has translated onto the screen. Most of the main characters are white Englishmen and women, including the lead, John Beecham, a kind of Poldark-y, Indiana Jones-y figure — a former soldier who left the East India Company because he didn’t like their values. He believes India should be ruled by Indians, you see… although the current ruler is set up to be one of the series’ villains, as his suspicion of Beecham is standing in the way of our hero’s business plans. But it’s okay, because the house’s servants are all locals, and they’re a funny bunch so we like them. I guess your mileage will vary on whether the show is outright regressive or just not as progressive as it perhaps ought to be, given how they were talking it up.

But even leaving that aside, the exposition-heavy dialogue is frequently leaden and undramatic, leaving the cast floundering unsuccessfully to breathe some life into their characters. It all looks suitably lavish, thanks to copious location filming and a no-doubt-healthy costume budget, but the lack of polish where it matters will sink the programme unless it can somehow improve quickly. But then again, it is on ITV, so you never know, it might run for years and years at this level… 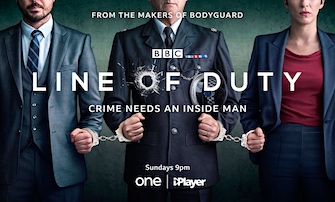 Every series Line of Duty introduces us to a new case of possible police corruption for the dedicated boys and girls of AC-12 to expose, and every series it turns out to tie into the overarching tale of deep-rooted links between organised crime and a never-ending parade of bent coppers. But could they finally be getting to nub of it all? They’ve got a solid lead… and so, it seems, does their newest case: an undercover officer who seems to have gone native, but might actually be onto the top man behind it all. The real problem is, he suspects it’s good ol’ Ted Hastings, the head of AC-12 himself. Well, who better to run police corruption than the guy in charge of investigating corruption? And it forces his underlings to ask: are his borderline-illegal actions just bold moves to get the job done, or is he trying to cover for something?