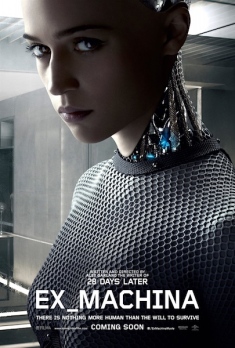 A British sci-fi movie from a first-time director will tomorrow take a place at the table (well, in the auditorium) alongside 2015’s biggest awards contenders, as it vies for multiple gongs at this year’s BAFTAs — and it stands a very plausible chance of walking away with several of them, too. I hope it does, because, after a year that brought us awards-quality sci-fi bombast (Mad Max, Star Wars), it’s fantastic that a small film about three people sat in rooms talking can stand toe-to-toe with them as one of the year’s best.

The increasingly ubiquitous (and deservedly so) Domhnall Gleeson stars as Caleb, a programmer at search engine giant Google Bluebook who wins a staff lottery to spend a week with the company’s reclusive founder, Nathan, played by the increasingly ubiquitous (and deservedly so) Oscar Isaac. However, on his arrival he learns he’s not just there to hang out: Nathan wants him to perform a Turing test on an AI he’s built. The point of the Turing test (as I’m sure you know) is for a human to interact with an AI but not realise it’s an AI, so Caleb’s surprised when said AI — Ava, played by the increasingly ubiquitous (and deservedly so) Alicia Vikander — comes in the form of a robot that’s obviously a robot. The real test is whether Caleb can know he’s talking to something non-human and still come to be convinced it’s human. As Caleb begins his interviews with Ava, it becomes apparent that there’s something else going on at this remote facility, where regular power cuts mean they’re all locked in…

As is probably clear, Ex Machina is a sci-fi movie of the thoughtful variety. It’s a film that considers ideas of artificial life, how we test it and what it means to create it, and only gradually builds in thriller elements that pay off in its final twenty-or-so minutes.

In truth, it’s not the most thorough deconstruction of what it means to be human and whether artificial intelligence can have that right, but it does touch on these issues and, in so doing, leaves them open for the viewer to mull over for themselves, or debate with friends, or however else one likes to consider their movies post-viewing (like, I dunno, writing about them on the internet or something).

There are thematic similarities to Blade Runner, which (in case you’ve not seen it) also deals with the humanity or otherwise of man-made intelligence. Mulling on that comparison, I’m tempted to say Ex Machina is almost the inverse of Blade Runner, in this regard: Ridley Scott’s classic is ostensibly an SF-noir thriller (Harrison Ford is a cop hunting down some rogue robots), but by its end has revealed a considered exploration of what it means to be human, and whether these artificial creatures can lay claim to that. Conversely, Alex Garland’s film seems like it’s sitting us down to consider those same issues, but is actually laying the groundwork for revelations and twists that build to an edge-of-your-seat climax. I’m not saying one’s better than the other in this respect, just that they’re approaching the same topics almost from opposite ends.

Also like Blade Runner, Ex Machina is an exceptionally well made and performed film. Not in the same way as Blade Runner — it’s bright and clean and modern, in a Google-y, Apple-y kind of way — but to a similar level of internal consistency and accomplishment. Gleeson’s Caleb may seem a little plain, a blank page for the other characters to write on, but as his insecurities begin to come to the fore you realise that’s almost the point. Isaac is suitably overbearing as the alcohol-dependent genius behind Bluebook and Ava, an initially affable but quickly disquieting presence — he may be a threat, or may just be a bit odd.

And his dance scene is surely one of 2015’s highlights (there’s an extended version hidden on the US Blu-ray, which is a treat). Garnering the most praise (and awards) is Alicia Vikander’s take on an AI. It’s a tricky role to tackle, because she’s not just a robot — that would defeat the point of Nathan’s exercise — but nor is she fully human. It’s a tightrope of a role, a fine line to walk, and Vikander negotiates it with aplomb. To say too much more would be to spoil it.

Aside from the acting, the film’s most striking element is surely the design of Ava. Her face and hands appear to be human, but everything else is robotic, and much of it transparent. This isn’t a case of slipping an actor into a suit painted with circuitboards — you can see the metal limbs and motors in her arms and legs, the metal spine in her back, the various computers or power sources or whatever glowing and spinning inside her. Occasionally she dresses in clothes and her workings are covered, but she spends most of the film with them on display. The CGI is literally flawless, which for a relatively-low-budget little British sci-fi-drama is all the more remarkable. I guess the visual effects awards are going to go to the big films, Star Wars or Mad Max or The Revenant (the bear seems to be very popular), but I do wonder if the work here is more deserving. You know how it must’ve been done — mo-cap suits and CGI — but there’s still a feeling of “how did they do that?”, because it’s so faultless. In fact, you don’t even wonder how they did it, because you just accept it; it’s only if you actively stop to consider it that you realise it’s physically impossible and must be CGI.

Those after a dissertation-like hard-science deconstruction of the meaning and possibilities of AI will likely find Ex Machina slightly lacking, as will anyone after the crash-bang thrills most mainstream sci-fi provides. Viewers prepared for a decently thought-provoking dramatic thriller about near-future tech, however, should be both engrossed, and grateful that movies like this are (for the time being) still getting made.

The British Academy Film Awards are tomorrow night, televised on BBC One from 9pm.

Ex Machina placed 20th on my list of The 20 Best Films I Saw For the First Time in 2016, which can be read in full here. 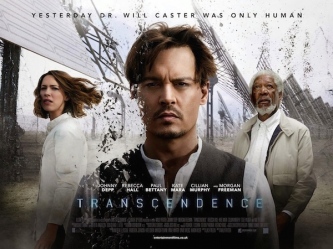 Johnny Depp plays scientist Will Caster, one of many artificial intelligence developers who are targeted in a coordinated series of assassination attempts by an anti-technology terrorist group. When he dies, his wife (Rebecca Hall) and best friend (Paul Bettany) use his brain patterns to recreate him as an AI. With access to the entirety of human knowledge as found on the internet, plus a mass of computing power and a lot of money, artificial-Will sets about research and development that will change the world. But his new advances may have a more sinister edge…

Transcendence is best known for the massive negative reaction it received on release, from critics and viewers alike. To be frank, I don’t really know why. Some say it’s too slow — well, I thought it moved like the clappers. What I thought was going to be the story was done in under an hour, from which point it spiralled off in new and interesting directions. How good is its science? I don’t know. I also don’t care — it’s about the characters and the spirit of what they do, more than whether it’s all literally possible. As a layperson, I didn’t think it was so ridiculously implausible that it took me out of the movie.

Another element that’s probably too challenging for some is where our allegiances are meant to lie. (Some spoilers follow in this paragraph.) At the start, it’s clear Depp & friends are the heroes and the murderous anti-tech terrorists are the villains. As events unfurl, however, artificial-Will perhaps goes too far, Bettany teams up with the terrorists, and eventually so do the government and Will’s other friends. There is no comeuppance for some characters who are initially begging for it; a good one self-sacrifices somewhat heroically. This doesn’t fit the usual Hollywood mould at all (well, the last bit does, sometimes), no doubt to some’s annoyance. The number of people who clamour for any sliver of originality or texture to their blockbusters, but then are unhappy when they actually get it…

Also up for debate is the film’s relationship with technology. It wouldn’t be wholly unfair to call it sceptical, maybe even Ludditish. That reading is only emphasised by Pfister’s Nolan-esque insistence of shooting on 35mm film, rather than now-standard digital, and going so far as to grade the movie photochemically rather than use a DI. This is an effects-filled film, too, so in all kinds of ways a computer-based post-production would’ve been the sensible way to go. Whether this insistence on old-school methods is artistically merited or not, it serves to underscore the film’s suspicion of where rampant technological advances may take us in the future.

A flaw I will absolutely acknowledge, however, is the film’s opening: set five years on from Will’s death, we see Bettany in a power-less world, where laptops are used as doorstops and discarded mobile phones are strewn across the street. Regular readers will know how much I hate pointless flashforwards at the start of films, but this is one of the worst ever — it gives away almost everything that will happen,

robbing the entire film of tension and nullifying any sense of surprise, and the movie doesn’t compensate with, say, a feeling of crushing inevitability. The climax in particular becomes a drawn-out exercise in connect the dots: we’ve been shown how this all ends up, now we’re just seeing the minutiae of how it got there. There’s no twist or reveal to speak of, just a wait for it to marry up with what we already know.

Some say Depp is wasted in a role where he cops it in the first act and is basically a computer voice from then on. There are pros and cons to this. From an acting standpoint, Hall and Bettany are really the co-leads; from a storytelling perspective, it’s them plus Depp. It pays off repeatedly to have a proper actor, rather than a glorified extra, as the third pillar of that relationship. Plus, having the film’s sole above-the-title star absent himself so early is an effective move — “he can’t die, he’s the star! …oh, he did.” Etc. As an acting showcase, it doesn’t give Depp much to do, other than reign in the flamboyance that is his go-to these days. Points for appropriate understatedness, then.

It’s left to Hall to carry the weight of their relationship. While he’s alive the pair don’t make for the most convincing “most in love couple ever” you’ll ever see, that’s true, but her emotions and dilemmas after his death and in the years that follow are more affecting. That said, this isn’t a low-budget drama. There’s definitely potential with this concept to make a film like that — one that focuses more firmly on the ethical and emotional effects of recreating someone after death (I think there’s an episode of Black Mirror that does something similar, in fact, but I’ve not seen it). Those considerations are in the mix here, but it’s a $100 million blockbuster too, so it has to allow plenty of time for military machinations and an explosive climax.

I guess that’s probably the explanation for Transcendence’s poor reception, in the end: it’s too blockbuster-y for viewers who’d like a dramatic exploration of its central moral and scientific issues, but too lacking in action sequences for those who misguidedly expected an SF-action-thriller. I maintain it’s not slow-paced, especially if you think it’s going to be, but nor does it generate doses of adrenaline on a committee-approved schedule. It’s not all it could have been, but if all you’ve heard is the mainstream drubbing, it’s probably better than you expect.