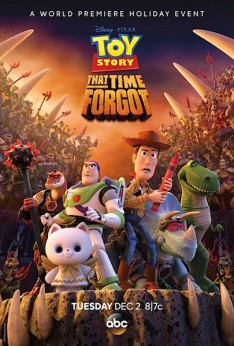 The second Toy Story TV special, and the fifth short adventure for the characters that perhaps should have had their last hurrah in the third feature film, is little more than a crushing disappointment.

When Woody, Buzz, and a selection of the now-extensive supporting cast are taken to a friend of Bonnie’s for a play date, they get lost in his toyroom and come across the Battlesaurs, a line of toys who — ignored by Bonnie’s friend, who does nought but play on a games console — have established a whole society, ignorant of the fact they’re plastic action figures.

Toy Story That Time Forgot manages the tricky feat of feeling both too rushed and too long. There’s no time for mystery or surprise as it hurtles through the plot — not that there’s too much of that, either. Half of it recycles Buzz’s arc from Toy Story 1 (he doesn’t know he’s a toy! Then he finds out, and he comes to love it!); the other half is a villain with what I think is an original idea (he’s delighted the kid doesn’t want to play with them because it means he can rule over the other toys), but isn’t given enough time to be developed.

It’s pretty obvious how all of this will play out, meaning that, even with a frantic pace, it feels like it takes too long to get through it. It doesn’t go anywhere much with the concept, so feels repetitive in the middle — Buzz and Woody are captured then set free three times. Three. If that time was spent building up the world or characters’ motivations, it’d be fine, but those elements are only seen in snatches, or raced past in single lines of exposition, with time instead devoted to adequate but uninspired action sequences. 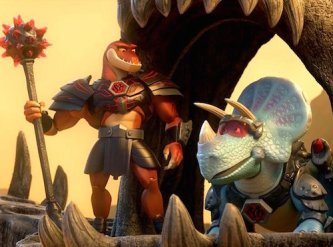 The whole thing just feels undercooked. Apparently it took three years to make, with two of those dedicated to development. The Battlesaurs toy line was imagined in full, for example. There’s evidence of that on screen, but it’s just an impression that there’s a lot of background work we’re not getting to see. A TV special gives them limited time to explore the new world they’ve created, of course, but Toy Story of Terror used the time perfectly, almost feeling longer and more significant than it was. By contrast, Toy Story That Time Forgot feels short, wasteful, and insignificant.

Tomorrow, Sky Movies Disney are airing the Toy Story trilogy and its two TV spin-offs on a loop from 6am until 2:40am.