I don’t do this kind of post often/ever — as we all know, I’d’ve had a very busy year of it if I did — but the death of Bill Cunningham, New York fashion photographer, is less likely to be mentioned in the film world.

That’s with the notable exception of the documentary Bill Cunningham New York, which I reviewed in 2012 and included in my top ten for that year, too. It’s a film about one man, not only in name but in attitude — it’s a portrait more than a narrative, and the skill of the filmmaker lies in the fact you don’t notice the filmmaker’s skill. 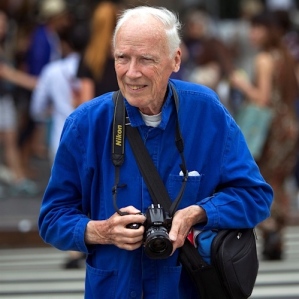 Bill was 87 years old — “a good innings”, as we say, and consequently not the most tragic newsworthy death to have happened in this year of perpetual bitterness. Nonetheless, as I wrote in my review, Bill seemed “a fascinating, unusual, but likeable, and certainly unique, individual”. That’s why the film is so interesting, and why his loss is particularly sad.

For much of his photographic career he contributed columns to the New York Times, and so it seems most fitting to link to their obituary. As they write, he was less a mere ‘fashion photographer’ and more “an unlikely cultural anthropologist, one who used the changing dress habits of the people he photographed to chart the broader shift away from formality and toward something more diffuse and individualistic.”

If you’ve not seen the documentary, keep an eye out for it.