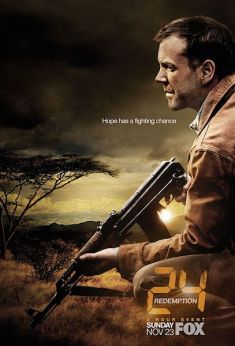 Remember the ubiquitous Writer’s Strike in the US? It must be about a year ago now, but its effects are still being felt — Dr Horrible’s Sing-Along Blog, Joss Whedon’s rule-breaing internet musical, made during the strike, is about to hit region-free DVD in the US (albeit on DVD-R and only from Amazon.com); plenty of second-year shows are getting canned, probably because their truncated first years didn’t allow time to get decent audiences (that’s one excuse anyway); and 24’s seventh season, kicking off in January 2009, is a year late. Which allowed them to make this in the meantime.

The setup is simple: Jack Bauer’s trekking round the world, currently holed up with an ex-army buddy (played by the ever-excellent Robert Carlyle) in the African nation of Sangal where said buddy has set up a school. Yes, Jack Bauer is living a life of peace. But then Bad Men turn up wanting the kids for child soldiers, and within the hour they’re attempting a military coup — this is still 24 remember, the action all takes place “in real time”. What’s Jack to do? Why, return to his old One Man Army self, of course — if he can’t stop the coup, he sure as hell can save those kids! Meanwhile, it’s inauguration day for America’s new female (black? 24’s been there and done that — twice) President…

For a Fox action series, off screens for almost 18 months and undoubtedly designed as a starting point for new viewers, Redemption (not that that title’s seen on screen) has a surprisingly slow build up. That’s no bad thing — this is a story after all, not a 90-minute shoot-out — but there are times when one feels it should get a wriggle on. This is likely where most, if not all, of this extended version’s new material was added. There’s almost 15 minutes added to the running time here, though some is surely due to a 5-minute credit crawl that must be much longer than the TV version’s. Having not seen the broadcast edit I can’t comment on what new scenes, shots or lines are added, but there’s no greater violence or thematic density than 24 usually produces so I imagine what was cut was cut for time alone.

That said, Redemption certainly tackles its fair share of issues — primarily, the use of child soldiers, and the US involvement (or lack of) in African genocides. It’s certainly admirable and worthwhile for such a popular series to bring these important issues to the attention of a mass audience who might otherwise ignore, or at least not be aware, of them, but they’re still included in a “mainstream American action series” way — that’s to say, they’re ultimately a reason for a shoot-out. There’s also some subtle political commentary, such as the UN Peacekeeper stationed at the school being a coward who runs away at the first sign of violence… and then betrays them to boot! Of course, just because it’s unsubtle doesn’t make it wrong, but Blood Diamond this is not. Whatever the politics, the action sequences — and, once things get going, there are a few — are all carried out with 24’s usual panache.

Is this a suitable jumping-on point for newcomers? Yes, quite simply. It’s several years since the last season and Jack’s in a very new part of this life. Some old faces crop up and there are some backstory references, but these are more nods for returning fans than anything important. Everything you need to know for this story is contained herein, and fortunately that doesn’t involve great slabs of exposition about previous seasons. On the other hand, it fails as a standalone movie. While the main plot — Jack defends school — is kicked off and wrapped up in the space between the title and the credits, there are several US-based plot threads that aren’t even close to being resolved. These are clearly designed to flow on into season seven — presumably they’re either elements bumped from the early episodes up into the movie, or a fleshing out of information that would’ve just been exposition before.

It’s hard not to conclude that Redemption would’ve been better without the US scenes. They add nothing to the main action in Africa and they’re all quite flatly directed, forcibly reminding you that this is just a TV movie by being worse than most TV these days. Their one true benefit is an ending that juxtaposes the new President’s inauguration speech with the civil war beginning in Sangal, which, consciously or not, underlines the hypocrisy at the heart of America.

As a standard season-opening episode of 24, coming on the back of the weakest-yet sixth season, it may well have earned itself an extra star. Judged as a standalone film, however, I fear it has to be just

Thinking “but that’s not a film”? Then please have a read of this.