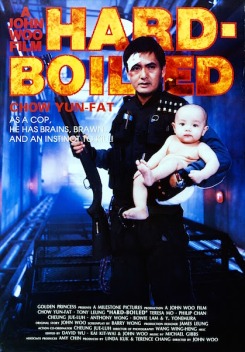 The first John Woo film I saw was Mission: Impossible II. I think. It may’ve been Face/Off, which I love, but this works better with M:I-2 because most people don’t like it. Personally, I like M:I-2. It’s not the greatest action thriller ever, but it has its moments and the plot isn’t half as complex as some like to claim. It’s certainly more fun than Brian de Palma’s Euro-thriller first film, which in retrospect looks a bit like a proto-Bourne. Of course, what M:I-2 really had going for it were its action sequences, which are occasionally a bit out there but always expertly done. Face/Off’s are even better again. Anyone with a basic understanding of structure can’t fail to see what I’m going to say about Hard Boiled.

I don’t think realism is Woo’s strong point — at least, not in his straight-up action movies. That’s not a flaw, though, but a deliberate choice — he dispenses with the realism of what a gunfight would be like (presumably, bloody scary and with fewer shots fired) and pushes the male fantasy of mindless slaughter to the limit. Which means his action sequences are pure adrenaline-pumping fun. Chow Yun-Fat single handedly slaughtering a warehouse full of heavily armed gangsters? Well, of course! Or directly hitting a small object wedged in an electrical pipe with a shaky shooting arm? Naturally! The action may have all the realism of a Dali painting, but it also has all the gleeful fun of repeating everything your sibling said when you were five — except with more choreography. It’s a cliché, but there’s something about Woo’s action that makes you want to use the word “balletic”. Not that I’ve ever really watched ballet. I expect it involves fewer guns.

These sequences seem to have been designed with one thing in mind — cool. And they are. There are a few holes in the plot and characters’ logic, but that doesn’t matter when they can leap around firing two pistols at once and always hit their target, while the bad guys — who could shoot just fine when they slaughtered some innocents a few minutes ago — keep missing them… with machine guns. If you think about it too hard then of course it’s nonsensical, but somehow, in some way, this sort of action seems to appeal to most men (not all, of course, and if you enjoy it then don’t worry, it doesn’t mean you’re a bloodthirsty braindead weirdo). One particularly astounding sequence is achieved in a single long take, as Yun-Fat and Tony Leung make their way down several corridors killing Very Bad Men literally left, right and centre. It’s both exciting and technically impressive, considering how many squibs, blood packs, weapons and extras must have been involved to pull it off in one uncut shot.

If you don’t care for people shooting at each other, especially when it pushes believability beyond the limit, then there’s not really anything for you here. There’s some male bonding stuff, and other bits about duty and honour and sacrifice, and a climactic subplot involving lots of cwute lickle baby-wabies; but Hard Boiled is most at home when the bullets are flying and things are blowing up. And what a lovely home it is.