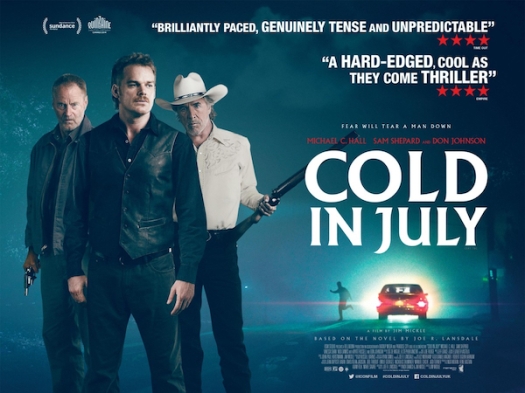 After a family man (Michael C. Hall) shoots dead an intruder in his home, the intruder’s ex-con father (Sam Shepard) threatens his family.

People often call for more originality in their stories, then criticise a film like this for jumping around in genre and tone. Personally, I didn’t think it changed much in either. The plot is far from straightforward — twists take the story in unexpected directions with each act (if not even more often) — but as a whole it remains a neo-noir crime thriller.

Filling out the film beyond its story, there are some great performances — Shepard, in particular, says very little but conveys his whole character and attitude. It’s very nicely shot by Ryan Samul, and there’s an amazing score by Jeff Grace.

At first blush Cold in July may look like just another crime thriller, but, with an unguessable narrative supported by strong filmmaking, it stands out from the crowd.

Cold in July placed 9th on my list of The 20 Best Films I Saw For the First Time in 2016, which can be read in full here, and also featured on my list of favourite movies from the past decade, which you can read about here.

Another month over, another list of movies I watched during it…

(I’ve decided to put a moratorium on the Analysis section until at least December’s update — as I wrote in June, it’s a bit pointless at the minute. That’s why relevant stats & stuff are now included in this part.)

Favourite Film of the Month
Although it has the shortest list of any month so far this year, it was a pretty strong one quality-wise — a ‘problem’ that afflicts both these first two categories, of course. Despite there being several strong contenders, I’m going to come down in favour of twisty, surprising neo-noir Cold in July.

Least Favourite Film of the Month
There were films this month that weren’t as great as I was hoping, to one degree or another (High-Rise, The Sting), and others that lived up to my moderate-to-low expectations just fine (American Ultra, Zoolander), but none that were outright bad. So the unlucky winner is Ten Little Indians, for being a word-for-word remake (of the ’60s version) that isn’t quite as good as its predecessor.

Most Blatant Author Surrogate of the Month
Jesse Eisenberg’s lead character in American Ultra feels like it’s just screenwriter Max Landis going, “hey, what if it turned out I was Jason Bourne…”

Film Most Deserving of a TV Spin-off Series of the Month
I know I already mentioned this in my review, but I really would devote some of my precious TV-viewing time to a Zootropolis Zootopia Zootropolis spin-off… if it was one of those kids’ shows that’s so well written it works for an adult viewer too, of course. I guess the detailed animation required to realise that world is cost-prohibitive to this ever happening, though.

The Audience Award for Most-Viewed New Post of the Month
A first, here: the most-viewed new post last month was the review of the month before that; i.e. The Independent Monthly Update for June 2016. Maybe it was my Brexit joke; maybe it was Deadpool; who can say?

This month: child hitmen, magical nannies, Shakespeare with big cats, and a really long walk to return some unwanted jewellery.

Summer! I hate summer. On the bright side, it means winter is coming… eventually…