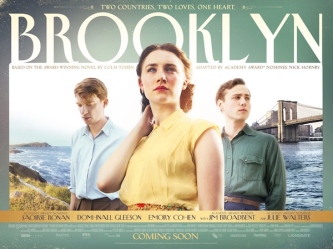 Adapted from Colm Tóibín’s award-winning 2009 novel by novelist-turned-screenwriter Nick Hornby and director John Crowley (Boy A, Is Anybody There?), Brooklyn is the story of Eilis Lacey (Saoirse Ronan), a young woman in 1950s Ireland who leaves behind her mother (Jane Brennan) and older sister (Fiona Glascott) for an exciting new life in New York. Lodging at the boarding house of Mrs Keogh (Julie Walters) with a gaggle of other girls and working in a glamorous department store, Eilis comes out of her shell, and falls for nice Italian-American lad Tony (Emory Cohen). When tragedy calls her back to Ireland, Eilis encounters nice Irish lad Jim (Domhnall Gleeson). Will she stick with her new life, or return home as a new woman?

That’s basically the plot of the whole film, bar the details; but the meat of Brooklyn is in the details, and knowing the shape of the story going in may even work to its benefit — it’s the kind of movie that might not look like it’s ‘about’ all that much. An easy point to pick on would be Eilis’ status as an immigrant, what with works of art about “the immigrant experience” being a definite Thing. There’s an element of that in the film, certainly, but I would say it’s not about anything so worthy-sounding. More, it’s a coming-of-age movie, about leaving home, spending time away, and then coming back to find home is different — not because it’s changed, but because you have. You don’t have to emigrate to understand that feeling — anyone who’s done something like go to uni will surely relate.

Guiding us through this, the film’s heart in every respect, is Saoirse Ronan’s leading performance. I will watch Ronan in essentially anything at this point, both because she seems to choose good material and because, even when she doesn’t, she’s great in it. This is probably her first really mature performance, convincing as a somewhat shy young woman who makes her way out into the world, in the process realising all the confidence she should have in herself. It’s the kind of character and performance that works by accumulation; it’s about the journey, not heavy-handed emoting in a scene or two.

As the family members left behind, Jane Brennan and Fiona Glascott get to give equally subtle performances, conveying reams of emotion in relatively few scenes and with their presence as much as their words. Similarly, Emory Cohen and Domhnall Gleeson might have been stranded with no dramatic meat playing Nice Guys, but they each find enough nuance to sustain their roles. It’s always nice to watch a movie that can tell a romantic story without needing to resort to melodramatic histrionics, and Eilis’ choice is all the trickier for the fact that neither reveals a Dark Side or anything so simple. It’s been noted before that Gleeson was in four of the big awards contenders last year, only picking up a few relatively minor nominations himself (at the Saturn Awards, British Independent Film Awards, and Irish Film and Television Awards), but those four roles display his range magnificently. “One to watch” may be an understatement.

John Crowley’s direction is largely unobtrusive, but that is a very different kettle of fish to lacking quality. The subtle changes in framing, lighting, and colour palette as the film moves through its locations and stages helps emphasise how Eilis is changing, and how the world changes in her perceptions, too. It makes the story’s times and places look beautiful without quite slipping into picture-postcard rose-tinted-memories territory.

Brooklyn is a deceptively simple film that might be easy to dismiss as a slight romantic drama with no real stakes, but I think that would be to do it a disservice. It is fairly subtle and largely gentle (the odd shocking development aside), but it amasses a wealth of feeling and personal development that builds, not to a crescendo, but to a point of emotional understanding.

Brooklyn is available on Netflix UK as of yesterday.