The most recent Best Picture Oscar winner tells of how the Boston Globe’s investigative journalism unit, the eponymous Spotlight team, exposed the widespread sexual abuse of children by the local Catholic Church — and, just as shockingly, the way the institution itself swept this under a rug for decades. As a film, this story is effectively a conspiracy thriller: a team of journalists expose a wide-reaching criminal cover-up within a respected and powerful institution. If it were fiction, you’d struggle to believe it, the scale of the conspiracy so vast that the very notion of it would be implausible. So it’s all the more astonishing — and horrifying — that it was real. And, as the closing title cards reveal, far larger than the Spotlight team realised even when they went to print.

There are many fascinating true stories that have produced merely adequate movies, so it’s something else again that transforms Spotlight into a Best Picture winner — albeit a somewhat controversial one, in that it came in a year when the top award went to one of three different films at the major awards (the others being The Revenant and The Big Short), rather than a consensus emerging as the various ceremonies all rewarded the same film (as usually happens, more or less); relatedly, it was the first Best Picture winner for over 60 years to only nab one other gong. More pertinently, doubts about the film’s deservingness stem from criticisms of its relatively plain directorial style, its focus on the plot rather than the characters within it, and its monomaniacal attention to the process of investigation rather than the thing being investigated.

In my opinion, the film’s storytelling would be better described as no-nonsense. It actually takes confidence to be this understated, I think. Tom McCarthy’s direction isn’t slickly shot and edited to make the story seem like a whizz-bang fast-paced thriller; nor is it affectedly artistic or indie, the kind of style this sort of low-to-mid-budget drama often resorts to nowadays.

Instead, it lets the story and the events speak for themselves, with the screenplay being the real powerhouse here. On that scale the directing isn’t even in second place. That’d be the performances, as the actors carry the delivery of information while still feeling like human beings pursuing an investigation, rather than mere narrators of what they discovered. McCarthy’s work is therefore the kind of helmsmanship that wouldn’t attract awards attention, except maybe by association with the film’s overall acclaim (he did get nominations, but the cynical side of me doubts awards bodies genuinely appreciated the qualities of what they were watching). Nonetheless, awards are not the be-all-and-end-all, and the low-impact style was surely the right way to go. This is a tale bigger than auteurist showboating, and McCarthy handles it with appropriate respect.

I think the perceived lack of characterisation for the journalists is due to similar reasons — both that the film has different fish to fry, and also that it goes about such business with greater subtlety. Personally, I think you come away with a really good sense of who these men and women are as people; at the very least, how they are in their work environment, which at the end of the day is where we’re observing them. This is accumulated through how they behave in interviews and meetings, how they react to developments and revelations, how they do their jobs. It’s good writing and good acting, because there are no scenes devoted to merely “exploring character” or whatever. There are allusions to their private lives without making them full-blown subplots, and that’s a good thing — this tale doesn’t need embellishing with a shoehorned romance or a failing marriage. That said,

this is also perhaps where the film’s only egregious bum note comes in: Ruffalo’s shouty speech about how they need to go to press now, which was naturally used across all the trailers and clips. It feels like that is precisely what that speech was designed for — that it was written, directed, and acted with the “here’s our big dramatic trailer moment” in mind. It’s not entirely out of character in context, but it is a bit much.

One reason it feels out of place is that the film perhaps hasn’t quite whipped up our fury at the situation to the same level. That’s not to say it’s soft on it — there are horrifying tales and facts related — but while the film is about historic Catholic abuse, it’s really about journalism. Other critics of the movie accuse it of telling the abuse story in a way that could be better covered through a documentary or reading a Wikipedia article, but I think that misses what makes Spotlight really tick. It’s the process the journalists go through — how they uncover the story as much as what they uncover — that the film is demonstrating for us. Sure, you can read a Wikipedia article to find out what they unearthed, but without them unearthing it in the first place there’d be no Wikipedia article to read. That’s what the film is really about. These events happened 15 years ago; the truth they outed has been a massive story ever since — that’s not something that needs fresh exposure (other than it never hurting to remind people). But as the world moves away from proper journalism, into the realm of amateur bloggers rehashing press releases and ‘professional’ organisations running endless clickbait listicles because that’s where the advertising revenue is, it’s a timely reminder that it’s this kind of proper, old-fashioned journalism that can expose massive, important issues; issues that you might think the police or legal system should expose, but which they’re sometimes (maybe even often) complicit in.

So was it the best film of last year? Perhaps that depends what you look for in movies. As much as I think the understatement fits, I also think it’s what stops it from being as cinematically exciting as, say, the visually-driven hyper-kinetic storytelling of Fury Road. But to focus too much on the deservingness or otherwise of awards is to miss the point. Much like it doesn’t need flashy camerawork or editing, or diversions into the characters’ private lives, so Spotlight doesn’t need awards to make you pay attention. It’s a story about the importance of independent investigation, told in a strong but no-frills fashion that befits the weight of the material.

Spotlight is available on Amazon Prime Video UK from today. 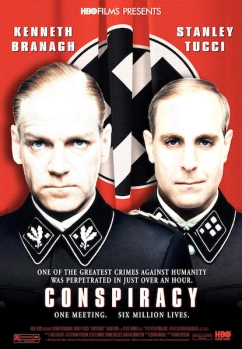 The Story
1942, Berlin: a group of high-ranking Nazis gather for the Wannsee Conference, its purpose being to determine the method by which they will implement Hitler’s policy of making Germany free of Jews. Put another way, this is the meeting that created the Final Solution.

Our Heroes
I mean, they’re all Nazis, plotting the Final Solution — heroes are in short supply. That said, some object… just not very many, and not for long.

Our Villains
I mean, they’re all Nazis, plotting the Final Solution — there are plenty of villains. Chief amongst them, however, is SS-Obergruppenführer Reinhard Heydrich (Branagh), whose calm and charming demeanour hides a will of steel and a sure belief in their terrible purpose.

Best Supporting Character
There’s a strong cast of British character actors (as well as those mentioned above, we have Ian McNeice, Ben Daniels, Brendan Coyle, Owen Teale, Peter Sullivan, Nicholas Woodeson, and Jonathan Coy — you might not know all the names, but you’ll likely know the faces), so it’s hard to name just one stand-out. However, Dr. Wilhelm Stuckart (Colin Firth) is particularly memorable: he’s a nice guy because he only wants to sterilise the Jews. He’s also one of the few men in the room who’s aware of how the rest of the world will judge them if they proceed down a path of extermination.

Memorable Quote
Hofmann: “Evacuation to where?”
Heydrich: “Let us postpone that question for a while.”
Klopfer: “To hell, one hopes.”
Lange: “Many already have.”
Luther: “Do they even have a hell?”
Heydrich: “They do now. We provide it.”

Memorable Scene
Although it’s bookended by arrivals and departures, and occasionally broken up in the middle with pauses for food, etc, the film is essentially one long meeting. Which sounds incredibly dull, but of course isn’t.

Making of
Pierson chose to shoot the film’s meeting sequences in long takes, sometimes getting through 20 or more pages at a time. A highly unusual method for a screen production, so the fact most of the cast had a stage background must’ve been a boon. It was shot on Super 16 film for similar reasons: it has longer film magazines and smaller cameras, allowing the cameramen to get closer to the actors.

What the Critics Said
“What a week for thoroughly exceptional, audaciously gripping fact-based dramas. We had Bloody Sunday on Sunday and now here’s Conspiracy. […] The performances are uniformly outstanding, but out of all of them it will be images of Kenneth Branagh as Heydrich you will take away with you. They may even haunt your nightmares. Branagh, who won an Emmy for the role, is flawless, and in Heydrich this fine actor has re-created a monster. Just watch the iron come into his eyes when he is contradicted or questioned. Watch that smooth charm slip as he calmly threatens those who are not completely on his side.” — Alison Graham, Radio Times

What the Public Say
“to see the planning of the Final Solution played out is chilling, to say the least. Obviously, it’s not an easy watch, but it’s an important film. If you’re at all interested in how scary and terrible things happen in this world, and how the death of millions can be plotted the same way your company runs a board meeting, this is definitely a movie to see.” — Dan Bergstrom @ Letterboxd

“A group of men have an administrative meeting” is possibly the least exciting logline for a movie you could ever read, but when those men are Nazis, at the height of the Third Reich’s pomp and opulence, and the businesslike meeting is to plot one of the greatest atrocities ever committed by mankind, it becomes horrendously fascinating. For that we can also thank Loring Mandel’s precise screenplay, and perfectly calibrated performances from a magnificent cast of seasoned actors.

#21 will be… nothing to do with Phillip Schofield.