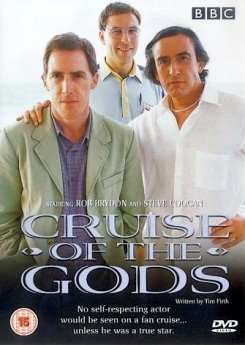 I’ve debated in the past where the line between what counts as a film and what counts as a TV production falls in this day and age, when a one-off feature-length event programme on a major network could easily outstrip a small theatrical film in both filmic spectacle and budget. So it really comes down to intention and/or place of release: if it’s made for TV, it’s TV; if it’s made for cinema or direct-to-DVD, it’s a film; if it’s made for the cinema but doesn’t really get released and goes straight to TV, God alone knows.

Cruise of the Gods is a clear cut case: it was made for TV, it was shown on TV, it’s a one-off TV programme. But I’m going to say screw that and bend my rules a little, just this once*, because I’ve definitely seen ‘proper films’ that aren’t as good as this (naturally, that could be said of a lot of TV) and, well, because I really liked it and wanted to share.

Rob Brydon stars as the lead actor from a cheap ’80s BBC sci-fi show who’s now working as a hotel porter, while his co-star (Steve Coogan) is off in America starring in popular TV series Sherlock Holmes in Miami. (A modern-day TV series update of Sherlock Holmes? What a horrid idea only the Americas would do!) When he’s invited on a fan cruise (like a convention, but on a cruise ship — these things do exist), an initially reluctant Brydon accepts because he needs some money. There he meets fans of the long-dead show, played by the likes of a pre-Little Britain David Walliams and a pre-Gavin & Stacey James Corden. Events, as they say, unfold. 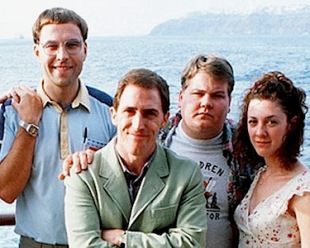 Though the film pokes fun (fairly good-naturedly) at sci-fi obsessives, the underlying story here is about a man overshadowed by his past. In this Brydon gives a strong performance — I think he’s a better actor than he’s normally given credit for — and he’s ably supported by Corden in particular, though to say what gives his role such quality might spoil a twist. He’s another one who’s actually a very good actor, but it gets hidden beneath a public persona that led to such dross as that sketch show with Mathew Horne.

The biggest twist, however, is that Coogan plays a nice character. There’s no surprise sting in the tail there, he’s just nice throughout. It’s weird.

As this is TV, the writer gets prominence over the director; indeed, the opening credits follow the title card with a just-as-big “by Tim Firth” credit, while Lowney’s name is relegated to the end credit scrawl. Such is the fate of many a TV director. Their careers have followed suit too: Firth went on to films like Calendar Girls, Kinky Boots and Confessions of a Shopaholic. (Before it he wrote, amongst other things, The Flint Street Nativity (which I probably last saw when it was on in 1999, but remember fondly) and Border Cafe, a forgotten mini-series which I’ve always vaguely remembered watching. I think this is the kind of thing that can happen with writers: they’re so often undervalued that you might end up seeing a lot of their stuff, almost to the point where it could be called following their career, 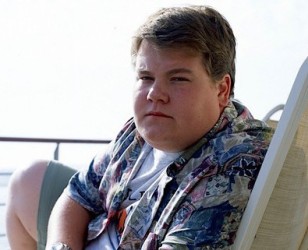 without ever realising all those disparate things were penned by the same human being. Poor writers.) Lowney, meanwhile, has stuck to TV, with episodes of Happiness, Little Britain and Married Single Other (amongst others) to his name, and most recently some bits of Glastonbury 2011. (Poorer directors.) None of this tells you much about Cruise of the Gods, I’d just observed it all.

There was talk of this being remade as a film, again starring Brydon and Coogan. I don’t know if that’s still going ahead. Really, there’s no need: I think it’s an entertaining comedy and engrossing character drama as it is, easily on a par with similar-feeling British films (and easily exceeding others — Beyond the Pole, for instance). The only benefit would be wider exposure: people seem prepared to visit old films in a way that isn’t felt for most old TV, which is still seen as disposable and transitory by many. Their loss — they’re the ones missing stuff like this, while the more open-minded among us can find and enjoy it.