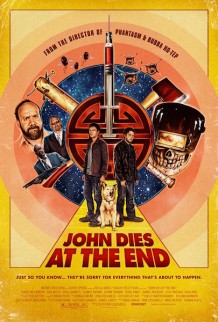 Based on the cult novel by Cracked.com editor David Wong, John Dies at the End is a bizarre horror-fantasy that defies easy explanation or summary.

It’s definitely an acquired taste — some will genuinely love it, some will genuinely despise it. I often fall in the middle when that’s the case, though I err towards the former here. It’s scrappy and weird and wrong in so many ways, but, on balance, pretty entertaining.

Plus, in an era when every mainstream movie (and many so-called independents) are essentially the same story told the same way, kudos for trying to do something different.

In the interests of completing my ever-growing backlog, I decided to post ‘drabble reviews’ of some films. For those unfamiliar with the concept, a drabble is a complete piece of writing exactly 100 words long. You’ve just read one.

* What do you have to do to get an 18 these days? The BBFC would’ve cut this to shreds in their scissor-happy heyday! It would seem the fact it’s a comedy allows the extreme gore to pass at a lower rating. ^