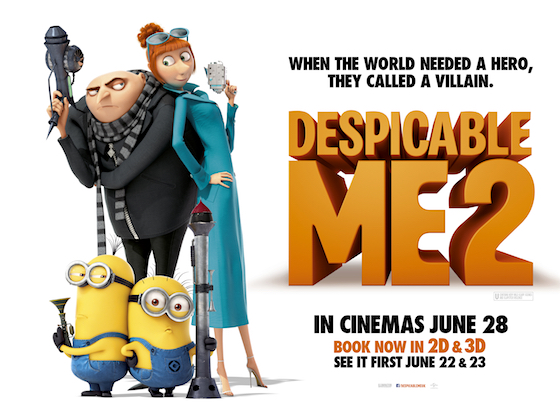 In this sequel to the popular animated comedy (which I wasn’t that fond of, personally), supervillain turned adoptive dad Gru (Steve Carell) is dragged back into his old world when the Anti-Villain League recruit him in order to track down the villain who stole a dangerous serum. Meanwhile, Gru’s daughters think he needs a girlfriend, and the AVL agent assigned as his partner, Lucy Wilde (Kristen Wiig), seems the perfect fit. Also, his yellow Minions are still around, getting up to all sorts of ker-azy antics.

That’s the concise version, anyhow. This is a film that rambles around a lot in the telling, presumably out of fear that it might ever become boring to hyperactive youngsters. Unfortunately, it almost had the opposite effect on me. The main plot just felt like a shape on which to hang the romantic and Minion subplots, but those subplots just felt like a constant distraction from the main plot. The end result is a film that’s narratively unsatisfying on all fronts.

Instead, entertainment value comes from individual scenes or moments. Personal preference will dictate just how entertaining those are, however. I didn’t feel there was much consistency, with the humour able to spin on a dime from being pretty amusing to falling flat. It doesn’t help that it feels way too long, overloaded with subplots that don’t go anywhere meaningful and the Minions’ sketch-like shenanigans. And there’s a lot of the Minions, clearly the breakout stars of the first movie (and hence why the series’ next film was entirely centred around them). While they amuse me on occasions, I mostly find them annoying, and am slightly baffled that anyone over the age of about six can find them significantly amusing.

But it looks pretty great in 3D, at least — turns out Gru’s long pointy nose was made for the format — and it’s quite funny and imaginative in places. Still, a good trim would’ve benefitted it enormously. Unless you do really enjoy the Minions, I guess.

The UK network TV premiere of spin-off Minions is on ITV today at 6:15pm.