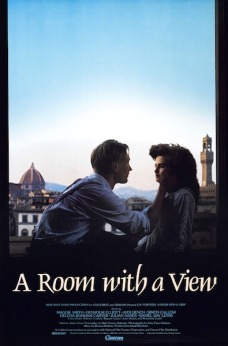 I can’t help but wonder if, back in 1985, there was any audience confusion between A Room with a View and A View to a Kill. One can imagine legions of Bond fans accidentally finding themselves with a witty heritage drama, and legions of old dears accidentally finding themselves with a man twice their age trying to be an action hero. (In actuality the films were released about a year apart — that being just one reason this is a particularly silly notion.)

Putting aside such nonexistent confusion, what of that witty heritage drama? Once again, thanks to the adaptations module of my degree, I’m stuck watching a film straight after reading the novel it’s based on. So far these viewings have supported my long-held theory that reading any novel before watching the film version (especially immediately before) is a Very Bad Idea. However good A Room with a View may be — and it certainly has its share of positives — it still pales slightly in direct comparison to the novel.

The film’s faithfulness is admirable at least, combining events effectively at times and at others leaving well alone. Unfortunately this “copying out” style of adaptation means that the dialogue is exactly as written but sometimes loses important elements through its abbreviation. In the novel, characters frequently mean something entirely different to what they say, but you wouldn’t guess so in the film. Similarly, a lot of the novel’s wittiness is lost — unsurprising, as much is carried in Forster’s narration, which here is largely left unadapted. “Largely”, because chapter names occasionally intrude as intertitles or subtitles. These usually merely skip what would be a few lines of expositional dialogue, but occasionally they’re entirely pointless, and frequently are rendered meaningless by what would otherwise be minor tweaks to the plot. As I suggested at the start, however, a lot of these flaws are only blatant when placed in stark contrast with the novel.

Others aren’t. Julian Sands is disappointingly flat as love interest George Emerson, and he frequently drags Helena Bonham Carter down with him (and not in the “written by Andrew Davies” sense). In my opinion, Bonham Carter is the weak line in an otherwise flawless cast, neither acting nor looking much like my image of Lucy (Sands might not give much of a performance, but at least he looks the part, and Emerson is meant to be quite awkward). This could well be just my personal vision clashing with that of the filmmakers, of course, but there you have it. Those two aside, the rest of the cast are excellent: Maggie Smith and Judi Dench are note-perfect, especially in the handful of scenes they share (it’s a real shame Dench’s character disappears before the halfway mark); Daniel Day-Lewis is the right mix of comical, annoying and unfortunate truth as Cecil; and Simon Callow, Denholm Elliott and a young Rupert Graves are also perfect fits for their roles.

Finally, no Room with a review (ho ho) can be complete without praising how gorgeous Italy looks here. The camera lingers on the art and architecture more like a documentary than a fiction film, taking the viewer on a sightseeing tour just as much as the characters. There are essays to be written (indeed, they have been) on why such spectacle is a bad thing, but if you don’t want to be so pretentious then it’s wonderful to look at. Which, in many ways, sums up the entire film.