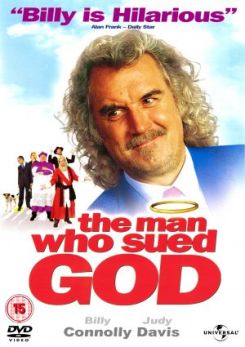 I always assumed this was British, probably because it stars Billy Connolly and has a suitably quirky premise — one can see it fitting in with the school of British comedy that’s brought us The Full Monty, Saving Grace, Kinky Boots and the like. But no: it’s actually very much Australian, which, considering its suitably quirky premise and that it stars Billy Connolly, isn’t that surprising either. And director Mark Joffe’s best-known/most-seen other work must be the first 10 episodes (ever) of Neighbours, which just cements the Anglo-Antipodean relation.

Country-of-origin is immaterial though, and what’s important is that The Man Who Sued God is funny, and righteous, and silly, and fantastical — in an “oh, if only it were true!” way — because in reality any such case would likely be laughed out of court and the insurance companies allowed to continue with their sorry and disreputable business. And some of these things which meant I loved it — the “only in a film” moral victories, the sillification of the church(es), and so on — will mean others hate it, or at least view it as a mediocre effort.

There’s a place for realist films — those that remind us of the constant victory of big nasty corporations, or obey the likelihood of the unjust justice system, and so on — but there’s also a place for the more life-affirming, the stories where the impossible happens and the ‘little man’ with a good point to make happens to encounter a like-minded system that means he can ultimately win through.

And putting the church in a position where their only sensible defence is to prove God doesn’t exist is always going to make for a good story.