Best known for the trailer that showed its hero pissing fire, Ghost Rider: Spirit of Vengeance is a semi-reboot of the Marvel comics franchise about a demon-possessed vengeance-seeking motorbike rider.

This new take has trashier, almost grungy, stylings, which at least make it more interesting than the “mainstream blockbuster”-styled first attempt. That doesn’t make it a good film by any means, but it does make it somehow less objectionable — it seems to better suit the tone of the character, which is inherently dark but also a bit bizarre and pulpy. It allows the directors (best known for the trash-action Crank films) to have fun with it too. While that only pays off occasionally — just as often it’s crass or cheap — that’s more than could be said for the previous movie.

Again taking the title role, Nicolas Cage looks considerably older and pudgier than last time. Maybe it’s all the scenery he’s been chewing. A villainous Ciarán Hinds gives him a run for his money, though — between them it’s a wonder there are any sets left. Maybe that’s why it all takes place on location, apparently in the country of Eastern Europe, 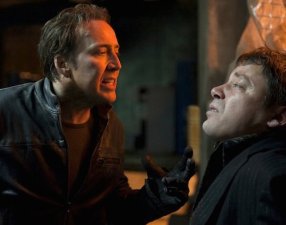 where adults have east European accents but kids sound American, and Idris Elba pretends to be French.

With classy dialogue like, “Everyone’s robbing me! It makes my balls hurt!”, it’s a wonder anyone allowed a superhero franchise from a major studio to receive this treatment. Points for boldness, but most of them are negated by uneven execution.

Ghost Rider: Spirit of Vengeance is on Film4 tonight at 9pm.