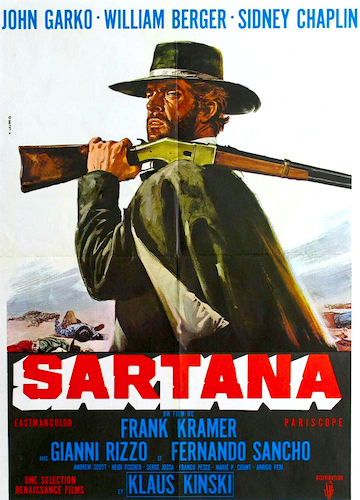 Arrow Video have a way of tempting me to buy films I never knew I wanted, often because I’ve never even heard of them before Arrow’s release is announced. The latest such purchase is a box set of Spaghetti Westerns starring the character Sartana, which collects all five of the ‘official’ movies (as with other popular Spaghetti Western characters, like Django, many unofficial sequels were produced), all of which have amusingly verbose titles in the same vein as this one — which, I must confess, was half of what convinced me the aforementioned purchase was necessary. The other was how the eponymous hero is described in the set’s blurb:

a mysterious figure, he has a spectral quality, aided by his Count Dracula-like cloak which also nods towards comic strip figure Mandrake the Magician, with whom he shares a penchant for card tricks. He takes pride in his appearance unlike Eastwood’s dusty wanderer or Nero’s mud-caked drifter. And there’s a dose of James Bond too in his fondness for gadgetry and the droll sense of humour.

This first movie only hints at that persona, because it’s busy being occupied with two other things: delivering as much action as it possibly can (there are shoot-outs galore, leading to a phenomenal body count), and an overly complicated plot, both of which are rolled out at a breakneck pace. The story has something to do with an insurance scam by a provincial bank, which involves having their gold stolen by some Mexicans, then re-stolen by some bandits. Quite why it needed to be stolen twice I couldn’t figure out.

The same goes for why everyone seems immensely concerned about where the original money is, rather than waiting for the insurance payout, which is surely the primary point of such a scam. Okay, you would need both sets of dough to turn a profit, but everyone just seems to want to make off with the original loot. Unless I misunderstood something, which I might have, because goodness knows what’s going on half the time — there’s plenty of to-ing and fro-ing of allegiances, which is equally as baffling. It gets particularly ludicrous in the final fifteen minutes, when everyone keeps double-crossing everyone else until only Sartana and one villain are left standing, ready for the final duel.

Is the “story” just a big ol’ excuse for plenty of shoot-outs and horseback chases? Quite possibly. At least much of the action is rather good — well staged, with the occasional neat idea on display. The whole film looks pretty nice, too. The print used for the Blu-ray is a bit ropey, with some spots of very bad damage, but I presume it must’ve been the best available. Nonetheless, the film underneath those issues is quite well shot. There are splashes of humour (deliberate or otherwise, like the Mexican leader who insists on calling himself Excellentisimo Señor Jose Manuel Francisco Mendoza Montezuma de la Plata Perez Rodriguez, aka El Tampico), and some stylistic flourishes as well. Particular highlights including the use of a pocket-watch’s tune to scare one of the villains, and Sartana’s favoured gun, a little four-barrelled pistol that he seems to be able to draw as if by magic, which gets even cooler when it reveals a hidden trick at the climax.

Sartana himself delivers on the promise of the blurb: in contrast to the rough, dusty Spaghetti Western heroes we’re used to, he cuts quite the dash, smartly dressed in a black suit replete with red-lined cape. He may be an out-for-himself money-centric gunslinger just like the rest, but he’s also a cardsharp for variety, which is revealed in a fun sequence when he joins a poker game shortly after arriving in town. Him pulling a fast one on the other players leads to a stand-off and shoot-out, because what doesn’t in this movie?

In his chatty audio commentary, fan and expert Mike Siegel acknowledges that the plot is incoherent and, for that reason, it’s not his favourite film of the series. I found that rather heartening to hear, because by the end of this first film I was beginning to wonder if I’d let myself in for a less-than-satisfactory time with this acquisition. Not that If You Meet Sartana is a bad movie, so long as you focus in the right places: the action is suitably exciting, even as its undermined by the frustrations of a confusing storyline.

Bunch of additions to the ol’ #Bluraycollection today.
Latest arrival. Might finally get round to watching it this weekend, now...
Just arrived 😁
Ordering direct from the publisher sometimes has its perks.