I confess, I hadn’t even heard of Split Second before a remastered Blu-ray release was announced a couple of months ago (more details about that at the end). A sci-fi/action/horror hybrid starring Rutger Hauer is the kind of thing that sounds interesting to me, but the fact I’d never come across it before seemed like a red flag. Fortunately, it’s on Prime Video, so I didn’t have to make a blind buy, and this is a recommendable course of action for anyone similarly unacquainted with the film. I did go on to purchase the Blu-ray, but I can see why others would not. Split Second isn’t exactly in “so bad it’s good” territory, but it has a distinctive quality that will not be to everyone’s taste.

Set in the future-year 2008, when London has been flooded thanks to global warming and pollution has turned day into night, Hauer chomps cigars, chocolate, and scenery as Harley Stone, a badass rogue cop on the hunt for the serial killer who murdered his partner three years ago. Assigned to keep him in check is rookie cop Dick Durkin (Alastair Duncan), and together the pair realise their quarry may not be altogether human…

And if you’re wondering what the film’s title has to do with any of this… yeah, bugger all. One of the working titles was Black Tide, which suits the film so much better. I mean, it’s still not wholly fitting — the global warming/pollution stuff is dystopian-future scene-setting without any true bearing on the actual plot — but at least it evokes the tone and style of the film more than “Split Second”, which sounds like a Steven Segal movie.

It’s almost hard to describe what that tone and style is, mind. It starts out almost like budget Blade Runner — it’s the future (so we’re told); it’s night; it’s raining; a hardbitten cop visits a seedy nightclub; etc. But then we get Stone’s first line of dialogue, which comes after a guard dog barks at him. He flashes his warrant card — at the dog — and says “police, dickhead.” To the dog. It’s hilariously terrible and awesome in one fell swoop. Hauer doesn’t give it an overtly comical delivery, and so you can’t quite tell if Stone is deadpanning or genuinely offering this information… to a dog.

This kind of almost-a-comedy-but-not-actually tone pops up increasingly as the film goes on, as if it was shot in order and the cast gradually realised how ridiculous it all was. By the time you get to the point where a deranged Durkin is demanding bigger guns, you’ll be cackling. Or you’ll be thinking “what is this godawful crap?!”, which goes back to my initial point: some people will delight in it all, while others will feel they’ve wasted their time on a low-budget no-mark that should’ve been left forgotten in the early ’90s.

I’m the former. You couldn’t reasonably call this a great movie — parts do border on “so bad it’s good”, and there’s much joy from the cast clearly realising it’s ludicrous. Plus, there’s a sense it’s not quite sure what it wants to be. It jumps from genre to genre as it goes on, and even the final monster (designed by Stephen Norrington, who’d go on to direct Blade and The League of Extraordinary Gentlemen) looks to be a mishmash born of uncertain direction, part hell-demon, part tech nightmare (is that a motorcycle helmet?!) But good golly does that crazy mix make for some barmy fun. 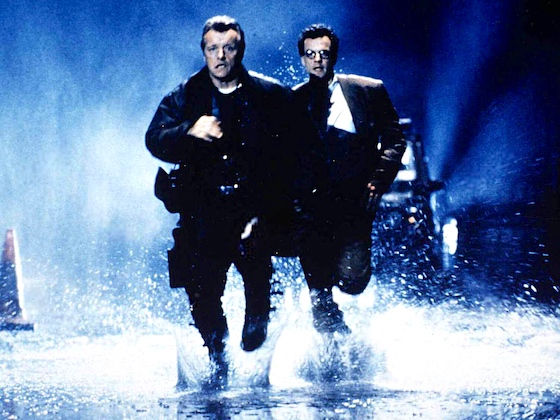 I tell you what, though: the underlying concept isn’t bad. This is exactly the kind of movie I think someone should actually spend the money and effort to remake: something with decent ideas and intentions, but which didn’t come off on the first go. Iron out the plot (mixing genres is fine; jumping between them feels “made up as we went along”), smooth out the tone (keep the deadpan humour, up the thrills and scares), and give it a decent budget (this one has a rough-around-the-edges feel), and you could have something special. Especially if you retitle it Black Tide.

Split Second is released on Blu-ray by 101 Films in the UK today. A matching edition will be released in the US on August 11th. It’s also currently available on Amazon Prime Video in both the UK and the US.

Many were surprised by the numerous high-scoring reviews this film received, considering it’s a bloke talking in front of some pictures for an hour and a half. Watching it, though, it’s easy to see why. For one thing there’s more to it than that — the show (made on Apple’s Keynote, not PowerPoint as many reviews incorrectly state) is full of clear diagrams and video footage.

Gore is a captivating speaker, explaining the issues in understandable terms without being patronising, and with humour when appropriate. The little interruptions following Gore on his ‘campaign trail’ are a mixture of illuminating and pointless, but ultimately don’t detract from the point.