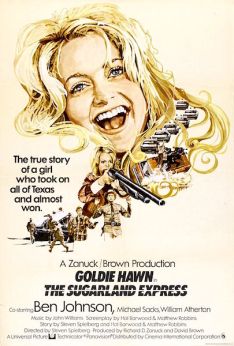 Steven Spielberg’s second feature (or “first” if you’re American) is based, loosely, on a true story. The fictionalised version sees Lou Jean (Goldie Hawn) breaking her husband (William Atherton) out of prison so they can travel cross state to liberate their baby from foster care. Everything goes smoothly until they accidentally kidnap a police officer (Michael Sacks), hundreds of police cars begin to follow them, and a multi-day slow-paced chase ensues.

It’s probably not obvious from the whole prison break/kidnap/true story thing, but The Sugarland Express is more of a comedy than a thriller. The ludicrousness of the situation is ramped up, though Spielberg keeps it grounded enough that you can believe it was real, and with an undercurrent of potential violence from the police that suggests a tragic ending may be unavoidable. Credit also to the cast for maintaining this balance, in particular Hawn, for who this was a breakout role. She’s naïve and optimistic without being too annoying, her comedic airheadedness weighed against an earnest belief that she’s doing the right thing for her child and that it’s all going to work out in the end.

Spielberg makes full use of the 2.35:1 frame’s width, which means that, viewed on broadcast TV at 16:9, it’s often noticeably cropped (this having been made before the time 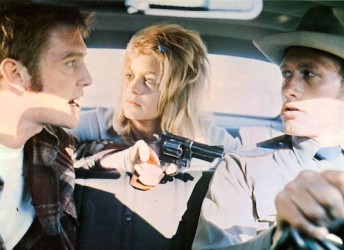 when filmmakers became contractually obliged to keep their compositions “TV safe”). The camerawork is frequently extraordinary, including at least one unbroken shot where the camera moves around inside and outside the car, like something out of Children of Men — only done for real in a moving vehicle, unlike Alfonso Cuarón’s soundstage-based hidden-cuts version.

Largely overlooked these days, I guess because it doesn’t obviously fit with Spielberg’s renowned sci-fi, adventure, and worthy-historical pictures, The Sugarland Express merits more attention. Tonally, and in terms of the level of directorial skill it exhibits, it fits right amongst the pack of his better-remembered works. Not his best picture, but able to stand confidently alongside his numerous very-good ones.

The Sugarland Express is released on standalone Blu-ray (as are the three other films previously available exclusively in the Steven Spielberg Director’s Collection box set) next Monday, May 4th.