Long-time readers may remember I reviewed all eight of RKO’s Saint films back in 2012. That series ended amidst an argument over rights (and they replaced it with the ever-so-similar Falcon series, which I also reviewed), but a decade later this continuation movie happened. I wasn’t even aware it existed until it was brought to my attention in the comments on another film. It’s technically not part of the same series (it was made years later by Hammer, believe it or not) so it’s harder to come by, but eventually I tracked it down… as a download that was clearly sourced from a VHS (it even lost tracking at one point!) that was quite possibly recorded off the telly.

The story sees Simon Templar, aka the Saint, rushing back to England to help a friend, but she’s killed in suspicious circumstances before he arrives. Investigating her death, Templar finds she was indebted to the River Gang, and sets about bringing them down. 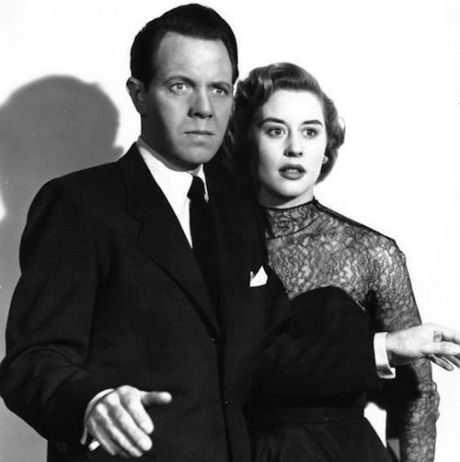 Although this was made years after the RKO films and by a different studio, it’s not a reboot or remake. Even allowing for those terms having become more applicable recently than they probably were in the ’50s, The Saint’s Return actually seems to be making a concerted effort to appear connected to the earlier series: near the start there’s a small scene where Inspector Fernack, the Saint’s regular nemesis/ally in the NYPD, acknowledges that Templar has left for England, which serves no purpose other than to suggest a connection to the other films. It’s even shot in a way that’s reminiscent of the older films (though, I don’t know, had low-budget studio filmmaking changed much in the intervening decade?)

That said, there are changes: the Saint is now an American, for no particular reason, and it’s more serious than I remember the other films being; but that might be my memory being clouded by the Falcon films, which were similar but lighter. In a rare feat for these movies, it managed to trick me with a plot twist, as I incorrectly guessed who secretive villain ‘The Chief’ would turn out to be. That’s either an achievement or a sign of me underestimating the film just because it’s old and cheap…

Taking the lead role is Louis Hayward, who originated the Saint on screen fifteen years earlier in RKO’s first film, The Saint in New York. He only played the role once before, but nonetheless makes a convincing return here. The rest of the cast includes Britain’s answer to Marilyn Monroe, Diana Dors, whose charms haven’t dated, and a minor role for one Russell Enoch — aka William Russell, who’d go on to find fame in the title role of the BBC’s The Adventures of Sir Lancelot, before ensuring his screen immortality as one of the original leads in Doctor Who.

Still, there’s more to The Saint’s Return than before-they-were-famous star-spotting. Although it seems to be the black sheep of the Saint film family, it’s actually a pretty good little thriller. Indeed, there were definitely worse films in the series proper. I’m not going to quite stretch to four stars for it but, for fans of the series, it’s worth tracking down.

Sometimes, at least for me, films improve in retrospect. My opinion while watching may be different to when I look back days, weeks, months, or even years later. Films I thought I disliked may benefit from a kind of nostalgia; some films just gain something from extended reflection, even if that isn’t conscious; films I underrated may improve when I gain perspective on their qualities relative to other works; in some cases, it’s just that I’m getting older and wiser.

There are several films reviewed on this blog that I think would warrant a different opinion if I watched them again now, but The Damned is the most recent example. I think if I’d got round to this review any quicker it would be less enthusiastic than what I’m about to write.

That said, it’s not as if I’ve had a complete turnaround of opinion: The Damned is an interesting film, certainly, but one that is perhaps somewhat undercut by its age; a kind of ’60s SF that would probably require a distinctly different approach if you were to attempt to make it today.

Not necessarily a bad thing, but it has that kind of disconnect from reality that’s markedly ’60s. In his review for MovieMail, James Oliver notes that “despite his background in low-budget genre flicks, Losey was at heart an art house director, keen to communicate big themes and ideas”, which perhaps explains some of this.

It’s also oddly constructed (perhaps due to studio interference — see Oliver again), starting out as a kind of small town British gang B-movie, with some eccentric and apparently irrelevant characters turning up in asides, before segueing into a nuclear-age SF parable. As a post on IMDb’s boards put it (yes, sometimes those are worth reading — it astounds me too), The Damned is “continually in flux — just as you think you’ve got it pegged as one genre of film, it becomes another.” Again, not necessarily a bad thing, but unusual.

Once the film hits its genre stride, it shows that it is (to borrow further from that IMDb post) “true science fiction, in that it’s about ideas, and a commentary on current culture, and where that culture may be leading. In other words, science fiction for adults”. Obviously that’s the “current culture” of 1963, but in that sense it perhaps offers an insight into the thoughts and attitudes of the time, 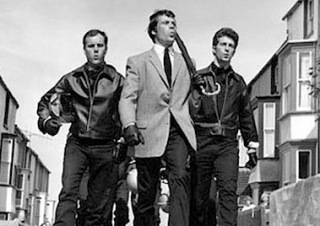 and the kind of inhumanity that might be reached in the quest to survive nuclear war.

My mixed reaction to The Damned leaves its score in the middle of the board, but I’d encourage those with an interest in intelligent science-fiction or ’60s genre films to give it a go.

Despite the numerous film versions of the Faust story, this is the only one that adapts Christopher Marlowe’s A-level-favourite 1588 play. It’s a shame, then, that it’s heavily edited from the original text and, despite also being a filmed version of the Oxford University Dramatic Society’s 1966 stage production, has clearly been inappropriately chosen as a vehicle for then-couple Richard Burton and Elizabeth Taylor.

Burton plays a suitably reverent version of Faustus, though is never less than able to convey his varied moods, from confidence, often underscored with insecurity, to repentant regret, to childish tomfoolery. Stuck with numerous long speeches, however, there are occasions when his delivery — and consequently the film — slip briefly into insomnia-curing monotony.

Meanwhile, the play’s lack of a significant female role makes Elizabeth Taylor’s presence rather unusual. Marlowe’s text has been tweaked to allow Taylor to crop up frequently as ‘Helen of Troy’. As well as appearing in original scenes that feature Helen, co-writers/directors Burton and Nevill Coghill have inserted her into any scene that would allow it. Such casting across several inconsequential roles, some not even in the original text, effectively creates a new character. Perhaps this adds an extra dimension to Faustus and his goals — attempting to imply a romantic angle — but it comes across as a desperate and unwarranted attempt to make this a Burton/Taylor film. 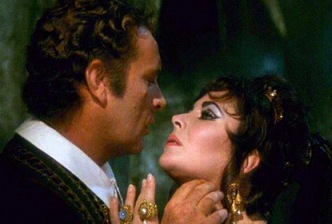 Elsewhere, Burton and Coghill’s vision of Faustus is stylistically reminiscent of a Gothic Hammer Horror, which is either wholly inappropriate or an ingenious genre mash-up — after all, such a genre-mashing trick has been pulled many a time with Shakespeare over the years. There are repulsively horrific corpses, a harem of naked ladies, an array of special effects, plus a medieval-styled gothic atmosphere to all the sets and costumes, though the scene where Faustus mucks about with the Pope feels more Carry On. Using inanimate objects in the roles of the Good and Evil Angels — respectively, a statue of Christ and a skull — is a small but inspired touch.

These aside, there’s a surprising emphasis on special effects: a skeleton that turns into a rotting corpse (click the link at your own discretion); skulls that pour imagined gold and pearls from their mouths; cuckold horns that retreat into nothing; and so on. One might think this is purely to buoy up the Elizabethan language for a wider audience, and one isn’t necessarily wrong, but considering Elizabethan theatre-goers enjoyed their gory effects as much as modern audiences clearly do, their inclusion isn’t incongruous. There’s certainly some visually impressive stuff on show, much of it suitably horrific — one often wonders about the PG certificate.

An even greater deviation than the effects is how much has been cut out — in a word, loads. Most of the comic scenes are gone (some of their humour wouldn’t translate today, making those a wise excision, but others are missed), and much of what Faustus does during his 24 extra years on Earth is missing too. Some of the cut scenes are among the most easily-enjoyed parts of the play, though would certainly lighten the tone. Perhaps they just didn’t have any money left for the further special effects required. The trims extend as far as the final scene, which also loses some of the play’s best bits. It’s unlikely anyone unfamiliar with the play would notice the omissions (having not read it for a good few years there weren’t many I missed), but returning to the text after seeing the film I realised how disappointing some of the cuts were.

Perhaps they were designed to focus the film more closely on the Faustus/Mephistopheles relationship,

perhaps just to heighten the presence of Helen by losing scenes she couldn’t have been shoehorned into; but in the process it both loses some of the best material and destroys any hope the film had of being a definitive filmed version of the play. Ultimately, such oversights proved to be the final straw for the film’s already-tenuous grip on a three-star rating.