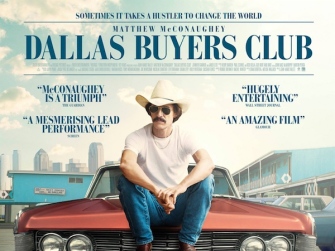 Every time I see a trailer for Dallas Buyers Club at the start of another Blu-ray I think, “that looks really good; I should watch it”. Then every time I get near watching it I think, “that sounds quite worthy and/or grim; maybe not right now”. So I guess kudos is due to Amazon UK for removing it from Prime Video* and finally forcing my hand, because it is very good.

The film tells the mostly-true (we’ll come to that) story of Ron Woodroof (an Oscar-winning Matthew McConaughey), a Texan guy who loves drink, drugs, sex, gambling, the rodeo, and probably any other less-than-savoury pursuit you can name. After he electrocutes himself at work, it’s discovered he actually has HIV/AIDS — that new disease affecting those nasty homosexuals, because this is the ’80s and this is the American South. Ron is given 30 days to live. Desperate for meds to keep him alive, he ends up in Mexico, on a cocktail of drugs that are barred in the US. While a pharmaceutical company pushes a potential cure that actually causes as much damage as it does benefit, Ron begins importing the meds that worked for him. Unable to sell them, he’s inspired by a New York project he reads about in the paper: to sell memberships to a club that gives the drugs out for free. Hence the titular organisation. Naturally, this exploitation of loopholes leads to confrontations with the law.

That’s just some of what’s going on, anyway, because there’s also Ron’s growing acceptance of the community he finds himself a part of, especially after he’s ostracised from his former friends who assume he’s gay; there’s his business partner, trans woman Rayon (an also-Oscar-winning Jared Leto), who has drugs and familial problems of her own; and the doctor (Jennifer Garner) who battles her conscience over the drug trials and Ron’s less-than-scientific but effective methods. If this makes Dallas Buyers Club sound unfocused, it’s more that it’s got a lot of different aspects to examine. It’s not just about narrating what really happened, either, because Leto and Garner’s characters are fictional.

So, some would argue, is Ron Woodroof — this version, anyway. For one thing, reportedly the real Woodroof was widely believed to be bisexual by people who knew him, so depicting him as a raging homophobe (who contracted HIV from a druggie prostitute) is completely inaccurate. I suppose that just calls into question how far one can go when adapting reality into fiction while still claiming it’s a true story, because in some respects it’s more interesting to follow the film’s version of Ron, who has to come to terms with a whole new world. This has led to complaints about making a homophobe the hero of the story, but, again, I’d argue this is part of the point: Ron overcomes his homophobia, learns how prejudiced and wrong he’s been (without quite dragging the whole movie down to Moral Lesson Of The Week levels). Where’s the journey if he was a nice, understanding guy from the start?

McConaughey is very good as Ron, though I’d wager he won the Oscar as much for his extreme weight loss as his actual acting. He was up the same year as Chiwetel Ejiofor for 12 Years a Slave, which I’d argue is an even more nuanced, interesting, and affecting performance. Dallas Buyers Club is not short of emotional heft, mind, but much of it is shouldered by Leto. He may come across as a right tool in real life, especially with his Method Joker antics recently, but that methodology does at least mean he’s committed to his performance here. He’s done the weight loss thing too, but there’s more to it than that. To this layperson, he’s very convincing as a trans woman (again, there have been complaints that it’s too stereotypical); but even leaving that aside, it’s the universal humanity he brings to a person suffering with a death sentence, and rejection by their own family, that tugs the heartstrings.

Some reviews emphasise the film’s ultra-low budget, though as it cost $5 million I’m sure there are other filmmakers who would dispute the idea of that being cheap! It results in some weak CGI to depict Ron’s worldwide travels in search of new drug sources, but the point is conveyed nonetheless. Otherwise, I don’t hold with complaints that the movie looks amateurish. It’s not slick or glossy, but that level of realism, almost grittiness, fits the tale. Apparently the budget for makeup was just $250, and the film still won an Oscar for it, which goes to show… something. I mean, the other nominees were Bad Grandpa and The Lone Ranger, so it probably doesn’t show much (just which one of those three sounds most like an Oscar winner, really).

For all the heaviness of the topics it touches on, the film isn’t without the humour that made its trailer so attractive. That said, if you’ve seen the trailer you’ve seen most of that material, and in a more condensed and highlighted form, too. It almost makes it look like a heist movie — how this clever chappy pulled the wool over the authorities’ eyes with his vicar costumes and amusing way of filling out forms — but that’s just a small part of the film; and, actually, those tricks often go wrong or flat out don’t work, which is not the heist movie way.

Dallas Buyers Club is very unpopular in some circles for their perception of its treatment of the issues and people involved, but while their voices may be loud (one such review is the second most-liked on Letterboxd) they’re also in the minority (it has 8.0 on IMDb, which is just outside the range of the Top 250, and the ratings graph on Letterboxd errs heavily to 4-out-of-5 territory too). Perhaps with time we’ll all come to think of it that way, and it will begin to look like a product of an era before the mainstream fully understood certain issues. For the time being, it’s a powerful yet still enjoyable drama.

* It was scheduled to be removed next Thursday, hence why I was helpfully posting this review today, but it actually went yesterday. One of the worst things about Amazon Video is trying to find out when they’re going to remove stuff from Prime. ^