Steven Soderbergh’s ‘retirement’ continues with another shot-on-iPhone movie (following last year’s psychological thriller Unsane), this time going direct to Netflix. Whereas Unsane made a virtue of its iPhone cinematography to heighten a disquieting, untrustworthy atmosphere, High Flying Bird forges ahead with no such baked-in excuse for its visual quality. However, similarly to Unsane, the fact it was shot on an iPhone is almost incidental, noteworthy mainly just because it’s unusual. But more on that later.

The movie is about Ray (André Holland), a basketball agent struggling to keep his players in check during a lockout… and already you’ve lost me, movie: I had to look up what a lockout is. I’m not much of a sports person, and I’m pretty sure we don’t have lockouts in British sports. Basically, best I can tell, it’s some kind of disagreement between the players (through their union) and the team owners, which results in games not being played when they should be, and people not being paid because nothing’s happening. So, it’s a bad thing, and it’s putting Ray in a bad situation — so he sets about trying to launch an “intriguing and controversial business opportunity”, to quote an IMDb plot summary.

Something like that, anyway. Frankly, it took less than two minutes for High Flying Bird to leave me feeling lost and confused, as it dives into an “inside baseball” (as the saying goes) depiction of basketball right from the off. It felt like watching a French movie without subtitles, except here the language isn’t French, it’s basketball. In fairness, I did eventually get a handle on what the overall plot was, but mostly with hindsight and not ’til quite far in — my analogy still stands for what the viewing experience was like until that point.

For fans of basketball, or at least those with some kind of knowledge of the workings of the business side of American sport, it might all be more palatable. I think there’s some good stuff in the plot and characters, but I can only say “think” because I made such a lousy fist of following what was meant to be going on half the time. The story culminates in a final twist/reveal about Ray’s actual plan. Fortunately, by that point I’d worked out (more or less) what events had happened, so I followed it — indeed, I got there ahead of it. Well, that’s because before viewing I read a comment which implied this was a heist movie (like Soderbergh’s previous work on the Oceans films or Logan Lucky), so I’d already been on the lookout for what the real con was. Nonetheless, I’m torn between whether the reveal was quite clever, or the film thinks it’s cleverer than it actually is. If I hadn’t had that heads up, maybe I would’ve been as mind-blowingly impressed as Ray’s boss seems to be when Ray reveals the real plan to him. Or maybe I wouldn’t’ve, who can say.

Unsane suggested you couldn’t make a good-looking film on an iPhone. High Flying Bird says, actually, you can. It doesn’t all look great (especially when, for example, the shot literally wobbles from something as simple as someone putting a drinks bottle down on a table), but there are some beautiful shots in here too. Unsane almost had to make a virtue of its odd look, the weirdass visuals chiming with the story of a possibly unstable mind. High Flying Bird has no such excuses, and most of the time it doesn’t need them; though some parts do still look like a first-effort student film, which is very odd coming from a director as experienced as Soderbergh (this is the 56-year-old’s 29th feature, not to mention his 39 episodes of TV). 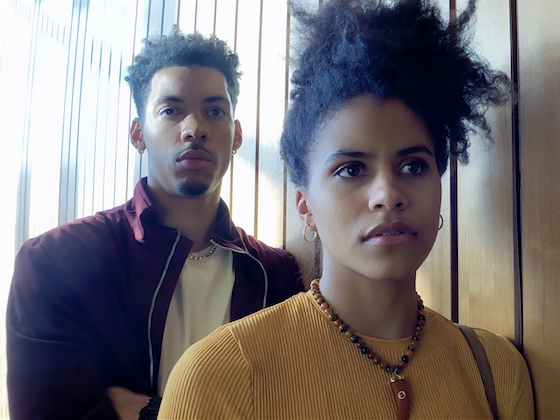 While researching the film’s production I came across this interesting article at The Ringer, which uses High Flying Bird as a jumping off point to examine the history, increase, and future of using iPhones for professional projects. It basically contends that phone-shot films are the future for everything, and makes that sound reasonable. It’s reminiscent of the emergence of digital photography for movies: it was a big story back when Soderbergh shot Che with digital cameras (Criterion’s Blu-ray release has a half-hour documentary dedicated to it), but it was only a couple of years later that became standard for all major movies, and a few years after that it’s now noteworthy when something is actually shot on film. It seems inconceivable that one day they’ll be shooting an Avengers movie on a phone, but then it once seemed inconceivable you’d shoot a movie that big on digital video…

It’s quite hard for me to give a concise opinion of High Flying Bird. I struggled through much of it, which made for an unpleasant viewing experience. But I acknowledge some of that lies with me knowing less about basketball than the film does. But then again, is it the film’s responsibility to explain to me the things I don’t know? I did get a handle on events by the end, and if I watched the film again I expect I’d follow it better, but I also don’t feel there’s much luring me back for a second viewing. 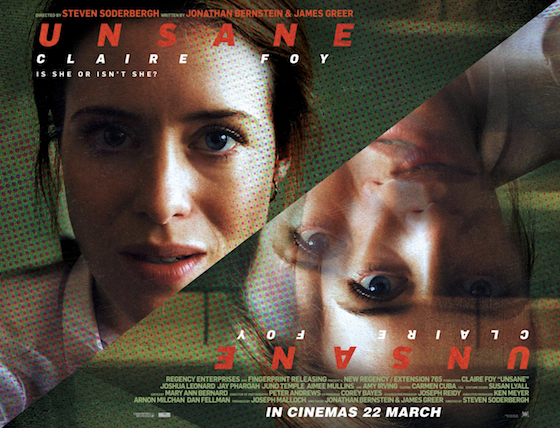 Probably the best-known thing about Unsane is that Steven Soderbergh shot it on an iPhone. Well, he’s not the first person to shoot a feature on a phone, nor will he be the last, but I guess he must’ve been the most high-profile. It’s a shame that’s all people seemed to talk about, though, because the content of the film is worth a look too.

It’s a psychological horror-thriller starring Claire Foy as Sawyer, a young professional woman struggling with a past trauma, who tries to simply get an appointment with a counsellor but ends up accidentally committing herself to a mental hospital. Although initially only in for a 24-hour assessment, her attempts to get out are only seen as further proof she has problems, and her ‘voluntary’ stay is extended against her will.

This early part of the film plays more like a drama than a horror movie, in that it’s fairly grounded in plausible reality — it doesn’t seem to be some nefarious scheme that gets Foy incarcerated, but rather bureaucracy and misunderstanding. Later the film takes a swing into outright horror territory, and I’ll discuss that in a moment, but it’s the first act that is most genuinely frightening. Events move inexorably forward in such a way that you can imagine yourself in Sawyer’s shoes, imagine yourself making the same unwitting mistakes that she does, imagine what you might try in that situation to get out of it, and imagine how you’d fail just as badly as she does. The film doesn’t gloss over any “if only she’d done this it would’ve been fine” moments — she tries everything rational, and it still goes wrong. 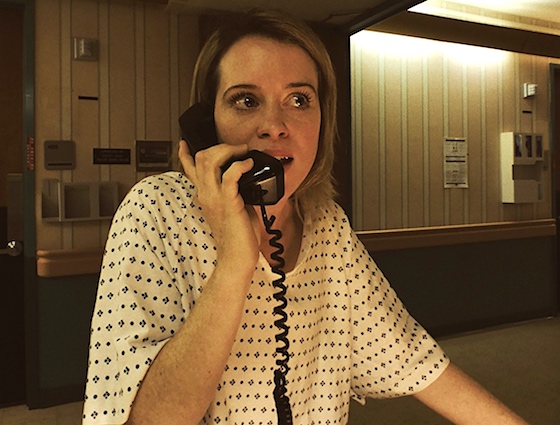 But, as I said, later things change a bit: Sawyer claims that one of the men working at the hospital is actually her stalker. Obviously this just contributes to the staff thinking she’s deranged, because of course a mental health institution wouldn’t employ a convicted stalker, but it makes us wonder: is it the stress of the situation getting to Sawyer, making her see things? It would certainly be ironic — the place that’s meant to ‘make’ her sane actually driving her insane. Or maybe the staff are right, and Sawyer is an unreliable narrator?

From there the film only becomes further immersed in genre-ness. It loses that “what would you do?” aspect, but I was engaged enough by then to just go with the story; others have found the tonal shift jarring, however. It definitely keeps you guessing — even after a mid-way reveal, you’re still unsure what further twists it may or may not pull. But it’s a funny old movie, in a way, because the shift from believable real-life horrors to inhabiting a more overt Horror mode means it sits at a hitherto unimagined crossroads between schlocky madhouse B-thriller and arthouse psychological drama. Well, I guess that’s the kind of thing we should expect from Soderbergh by now: a genre movie reimagined with auteurist sensibilities. Even when it takes the shape of a B-movie thrill-ride, there remains some psychological truth to the trauma Sawyer’s suffered and how it affects her. It’s also casually damning of things like the US healthcare/insurance infrastructure, which is, of course, a real-life problem. It’s always nice to sneak a valid real-world point into what is essentially a thrills-and-chills flick.

The sense of unease is further emphasised by the shooting style, because it looks… odd. Odd how? It’s hard to say, exactly. It’s partly the aspect ratio, which for some reason is 1.56:1. I’m perfectly used to watching films in 4:3 or 1.66:1, so pillarboxing doesn’t bother me, but it being a nonstandard shape is surprisingly disconcerting. It also seems that Soderbergh hasn’t just used the iPhone camera as-is, but has attached at least one different lens. I suppose some might argue that’s cheating, but it’s normal to add lenses to the basic camera in other modes of filmmaking, so why not? I’m no expert on lenses so can’t quantify what he’s done exactly, but there’s a sort of wide-angle, sometimes even fish-eye, effect that is, again, strange. Combine all that with an even-less-definable quality that seems to wash over the whole image, like it’s lacking resolution or definition or something, and I’m not sure if the film’s visual style is down to the limitations of the tech or if it’s a deliberate emphasis of them. Whatever the reason, it kinda makes me hope no one ever chooses to shoot a film on an iPhone again, because while it can be done, the results aren’t great.

And yet those results really do fit the mood of this film. I kinda hope no one copies that tech choice ever again, but, nonetheless, Soderbergh’s made it work for the story he’s telling. That story — with its ups and downs, its whiplash tonal changes, its very imaginable horrors and its only-in-a-movie ones — means the fact Unsane was shot on an iPhone is probably the least interesting thing about it.

Unsane is available on Sky Cinema as of yesterday.

Steven Soderbergh’s next film, High Flying Bird, was also shot on an iPhone. It’s released on Netflix on 8th February.