For some, The Karate Kid is one of the defining films of the ’80s, with a legacy so strong that, 34 years after the original film, YouTube launched a sequel/spin-off series — and it did well enough to get recommissioned twice (so far), so I guess they were right. I’m pretty sure I rented the original film on video when I was a kid, but my memories of it are incredibly vague, and I’ve no idea if I ever saw the sequels. Anyway, my point is that I don’t have a nostalgic attachment to the original, which seems to have coloured some people’s response to this remake (which is itself rapidly approaching being a decade old!) Maybe that’s for the best, because it seems to be a pretty thorough reimagining — heck, the kid doesn’t even learn karate!

This version stars Jaden Smith (son of Will) as the eponymous child, Dre, who’s forced to move from Detroit to Beijing when his single mother (Taraji P. Henson) gets a job transfer. Struggling to find his place in a foreign country, Dre gets bullied by his schoolmates, including a young kung fu prodigy (Zhenwei Wang). During one particularly vicious beating, Dre is saved by his building’s unassuming maintenance man, Mr Han (Jackie Chan), who it turns out is a kung fu master himself. When the bullies refuse to apologise because they’re taught poor values by their master (Yu Rongguang), Han agrees to teach Dre so that he might enter a kung fu tournament and face them fairly.

So, having a quick read through a plot summary of the original film, the actual story isn’t that different — set in China instead of the US, with different character names, and with kung fu instead of karate (apparently Sony considered changing the title to The Kung Fu Kid but producer Jerry Weintraub refused), but otherwise fundamentally the same narrative. Well, it is a remake — what do you expect?

From reading other viewer reviews, I get the impression a lot of people dislike it just because they’re nostalgic for the original or because they’re annoyed by Jaden Smith’s parents trying to make him a movie star. But if you remove those external contexts, the film offers a decent storyline and some strong performances — it’s Jackie Chan, c’mon!

Speaking of which, there’s an alternate ending which features Chan fighting the other teacher (something that doesn’t occur in the film as released, obviously). I can see why they wanted to get more of Jackie fighting into the movie, because his is a supporting role otherwise, but it would’ve kinda diluted what the film is really about right at its climax. That said, some versions of the film are perhaps already structurally comprised: apparently the Chinese release was re-edited to make it seem like the American kid started all the fights against those good Chinese boys. I can see why Chinese censors would force that on the film, but I don’t see how it quite chimes with an ending where Dre comes out victorious.

As for the cut the rest of us get to see, I can’t speak for how it compares to the 1984 original, but it holds up pretty well as an enjoyable film in its own right. 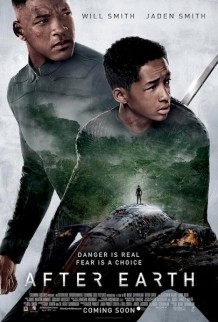 Conceived by movie star Will Smith primarily as a vehicle for his wannabe-movie-star son, and helmed by auteur-apparently-turned-director-for-hire M. Night Shyamalan, After Earth is a far-future sci-fi actioner about a militaristic father and son who crash land on a long-abandoned Earth, which has evolved into a hostile environment from which they must try to escape, while also being hunted by an alien super-predator.

Much derided by critics and audiences on its release, After Earth is not a film without merit. There are some good ideas here, albeit undermined by frequent plot and logic holes, often stilted acting, and a chronic need to over-explain things. There’s nice design work, even if its plausibility is suspect, but bonus points for creating a far-future humanity that feels weird and suitably distant, rather than showing tech in a currently-fashionable style that we could almost make now if only there was the money.

In many respects, it feels only a decent re-write — and a decent child actor — away from being a properly good sci-fi action-adventure. But story and dialogue niggles abound; the kind of things that perhaps seemed fine from the inside of the filmmaking experience, but to a fresh pair of eyes — i.e. the audience’s — get in the way. And when we’re increasingly treated to deep, subtle drama on television, any movie or show that seeks to over explain every plot or emotional beat just seems childlike. Maybe that’s my own fault for watching too much quality programming of late? Maybe people who don’t enjoy Game of Thrones or Mad Men or The Americans (or one of the other increasingly-prevalent shows that don’t feel the need to spoonfeed everything) prefer things to be spelled out for them? I don’t know. I feel like I want better, though; I feel like I want the film to make me keep track of things, rather than repeatedly spell it out;

I want to spot the neat callbacks and gradual character development for myself, not have the screenplay or direction screaming “look at the subtle thing we did! Wasn’t it subtle!”; I’d also quite like the film to set up some of its developments better, rather than charge ahead with “now he needs to fly — by-the-way, did we mention he can fly? No? Well, now he is.”

It also suffers from the blight of many a modern genre movie: too much CGI. Things like the monkeys and digital landscapes look like they could be from a film made five, maybe even ten, years ago. Why do filmmakers overreach themselves so? I guess it fundamentally doesn’t matter — we’ll always know they’re effects, however slickly made — but when you begin to notice that, and care that you’ve noticed, surely it’s taking you out of the world? The CGI isn’t all bad by any means — the future cityscape and Evil Alien Monster are pretty good — but the spaceship hangar, for instance, looks like an early-webseries-level virtual-set, so obviously dropped in via green screen that the actors may as well have retained green halos.

Even with these faults, however, I mostly quite enjoyed After Earth. For all the complaints levelled at it, primarily centred around it being a vanity project for the Smiths, there’s actually good stuff buried here — given more intelligent development and a different cast, perhaps it could even have been a genre classic. It certainly isn’t that, but it’s not as bad as some say. And it’s definitely M. Night Shyamalan’s best film for years. Sadly, that’s not saying much, is it? 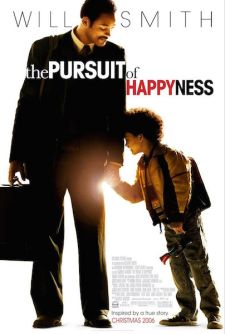 Will Smith gives up the comedy act and blockbuster action for the sort of true story that you thought only happened in movies.

His relationship with his screen-son is impressive acting, ’til you realise it’s his real-life son too, but even that does little to undermine things. It manages to avoid the sugary sentimentality that you might expect and in the process makes for a fair tale of the underdog succeeding.