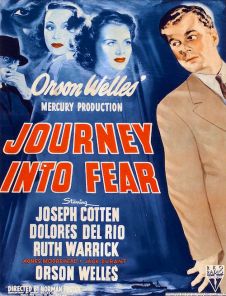 Remembered largely thanks to the involvement of Orson Welles (he has a supporting role, produced it, co-wrote it, and reportedly directed a fair bit too, though he denied that), Journey into Fear is an adequate if unsuspenseful World War 2 espionage thriller, redeemed by a strikingly-shot climax. The latter — a rain-drenched shoot-out between opponents edging their way around the outside of a hotel’s upper storey — was surely conducted by Welles; so too several striking compositions earlier in the movie.

Sadly there’s little else to commend the film, which takes a leisurely approach to its hero’s escape from Istanbul by a boat aboard which, unbeknownst to him until it’s too late, are assassins. Sounds tense and exciting? It isn’t; or, at least, nothing like as much as it could be. It doesn’t help that it was buggered about with by the studio, leaving subplots alluded to but deleted — the original version reportedly ran 91 minutes, a fair chunk longer than what we’re left with. (There’s also a version with opening and closing voiceovers and a pre-titles sequence,

On the bright side, it has a brisk running time, and as 70-minute ’40s thrillers go it’s at the upper end of their quality. And in spite of the mere adequacy of the rest, that climax honestly makes it a recommendable watch.