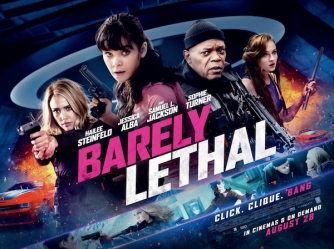 Hailee Steinfeld stars as a teenage girl raised from childhood by a top-secret government organisation to be an expert agent, but who has always longed for a more normal experience. When the organisation thinks she’s died on a mission, she uses it as a chance to have that normal life. Researching the high school experience from teen movies, she heads off to a typical US high school… and finds life isn’t quite like the movies. Though it is a bit, but it’s allowed to be so long as you keep referencing the movies you’re riffing off… right? Oh, and of course her old life keeps intruding, in the form of people wanting to kill her ‘n’ all that.

Barely Lethal (that’s a pun on “barely legal” rather than a synonym for “mostly harmless, incidentally) was very poorly reviewed by critics, and I don’t know that audiences gave it that much better a reception, but at this point that works in its favour. You see, its production values are a little cheap and cheerful (despite a recognisable cast that also includes Samuel L. Jackson, Jessica Alba, and Sophie Turner), and sometimes it really falters with an overuse of clichés (is it OK to reference that they’re clichés, or if you point out you’re using a cliché is it still bad because you are still using that cliché?). But if its establishing concept sounds like something you might enjoy, and you go in with suitably lowered expectations, 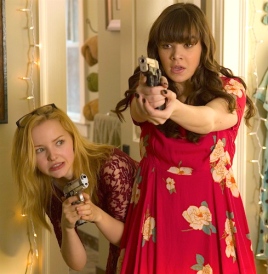 then I think there’s a fair chance you’d find it to be a frequently amusing, occasionally very funny, and sometimes quite sweet high school comedy — with added doses of action comedy for good measure. There’s even one great scene (which is more than many a “very good” film can claim); the kind of scene that, when it happens, is so right it feels like kind of an obvious idea, but I’ve never seen it done before (it kinda requires a premise like this to even work) and is pretty faultlessly executed.

In terms of pure, simple, for-what-it-is enjoyability, there’s part of me that wants to go out on a limb and say Barely Lethal just edges a 4… but the critical part of my brain points to those parts that are clunky, overfamiliar, or underdeveloped. I did think it was mostly undemanding fun, though.