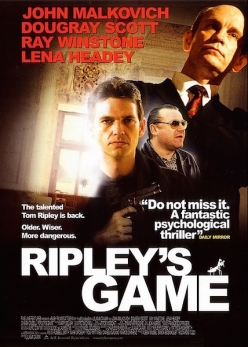 Matt Damon is back as… Oh, wait, no he isn’t — he’s turned into John Malkovich.

Not quite — there’s no reasonable way Ripley’s Game can be considered a sequel to Anthony Minghella’s The Talented Mr Ripley. Though it’s adapted from a later novel in Patricia Highsmith’s Ripley series (previously filmed as the Dennis Hopper-starring The American Friend, incidentally), the action is relocated to the present day, and it’d be a pretty hard sell to believe Matt Damon would grow up to be John Malkovich.

Despite the acclaim of Minghella’s effort just three years earlier, and a cast that includes recognisable faces such as a Ray Winstone, Dougray Scott and Lena Headey alongside Malkovich, Ripley’s Game snuck out with barely anyone noticing, including going straight to TV in the US. There are surely reasons for this, reports of a problematic shoot probably among them, but the neglect is undeserved. In 2006, Roger Ebert saw fit to include it in his Great Movies list, though other critics are less favourable (the Radio Times, for one handy example, rate it just three out of five). While Ebert is in my opinion overselling the film by including it in a list of the best films ever made ever, it’s certainly an above average, consummately made, and constantly entertaining Euro-thriller.

Perhaps the difference in opinion about the film stems from one, arguably crucial, sticking point: the Radio Times criticises the humour included in the murders and thriller sections, viewing it as a failure of director Liliana Cavani; conversely, Ebert approves of it, praising them as appearing somewhere “between a massacre and the Marx Brothers”. There’s undoubtedly more to the diverging opinions than this, but it’s at least emblematic. I’m inclined to agree with Ebert: these sequences do have tension — not the most one’s ever experienced in a thriller, but enough — but they marry the humour to it, leaving you chuckling on the edge of your seat.

For the most part the story keeps moving, twisting and turning in sometimes unexpected directions. Other films would happily take the first half-hour or so of this and stretch it to a whole feature, but screenwriters Charles McKeown and Cavani — adapting from Highsmith’s novel, of course, so the credit lies with her — take the premise further and in new directions. It’s not flawless, with the climax by far the biggest let down: Ripley and Trevanny hole up in the former’s villa, preparing for a veritable war as Ripley anticipates goodness-knows how many men to turn up. When it’s only two, it seems more believable than a whole army of mafia goons descending on the relatively insignificant pair, but it’s also distinctly anticlimactic after the hype. Still, at least the story has a final twist up its sleeve.

Malkovich may be a fairly respected actor, but to me he’s always seemed detached, flat, or mannered — often all three. Here, he’s still all three, but it suits Ripley’s unusual character down to the ground. His dry wit and incessant matter-of-fact delivery craft a quietly sinister, stalking nature, aiding the character’s believable unpredictability — that is to say, you’re never certain what he’s going to do next, but when he does it’s not surprising. I’ve never read a Ripley novel (there are five) nor seen another Ripley film (there are four), but Malkovich’s performance fits so perfectly I have little doubt this is precisely how Ripley should be played.

Among the rest of the cast, Ray Winstone is landed with a role he could play in his sleep, Lena Headey is perfectly fine as an unremarkable wife, and Scot Dougray Scott plays a none-more-plummy Brit. Unfortunately this accent sometimes seems to be the main focus of his performance, and it occasionally falters when he gets highly emotional, but it’s not really a problem… though it is rather odd to hear if you’re familiar with how he normally sounds. His character, Trevanny, is primarily a pawn in Ripley’s titular amusement, leaving Scott with only a passing hint of the character arc with which the role could have been gifted.

As noted earlier, there are numerous tales of problems on set, not least the multinational cast coping with a multinational crew in multiple nations, culminating in Cavani leaving towards the end of shooting and directorial duties being fulfilled by Malkovich. But as many have noted before, happy sets can produce dreadful movies and unhappy sets masterpieces, and while I don’t quite share the view that Ripley’s Game is entirely the latter, it certainly errs more in that direction than the other.