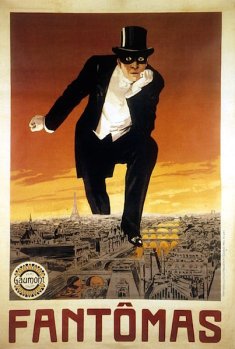 The first of the silent Fantômas films (I reviewed the second previously).

It’s interestingly structured: there’s no ‘origin story’ for Fantômas, he just is an infamous master criminal, who’s introduced in what would undoubtedly be a pre-titles sequence today, before the story switches to follow Inspector Juve and his quest to solve the disappearance of Lord Beltham… which of course leads back to Fantômas. Its pulp fiction roots shine through in the entertaining plot that’s just far-fetched enough.

As I said before, it’s not for everyone, but for those who enjoy this sort of thing it’s unmissable.

Second instalment of the early French film serial, adapted from a long-running series of pulp novels.

Fantômas is a criminal adept at disguise and avoiding capture by police inspector Juve. It’s full of crazy schemes and action set pieces, which means it’s actually a great deal of fun, relatively fast-paced and densely plotted, exciting and deliberately amusing (though, as with anything this old, there are things to point and laugh at if you’re so inclined). It also looks stunning for its age, with a stable and crisp picture, which incidentally makes great use of colour tinting (for example, turning from blue to yellow when someone switches on a light).

It’s not for everyone, but if you’re interested in early cinema this is one of the most entertaining examples I’ve seen. As you may have guessed, we were shown this as part of my degree; off the back of it I’ve ordered the DVD of the full serial.

I never got round to watching the rest of Fantômas, though I’ve been meaning to ever since… (story of my life.)