There’s nothing inherently festive about The Greatest Showman (if it has even one scene set around Christmas, I can’t immediately recall it), yet it was initially released on Boxing Day last year and now kicks off December’s premieres on Sky Cinema, and somehow the association feels entirely fitting. I guess it’s something to do with the tone and style of the film itself: a big, cheesy, schmaltzy, cheery musical — just the kind of thing many people like to wallow in during the big, cheesy, schmaltzy, cheery end-of-year festival. It’s almost a John Lewis advert in feature film form, only with upbeat original songs instead of whispery female covers of old hits.

Inspired very, very, very loosely by a true story, the eponymous gentleman is P.T. Barnum (Hugh Jackman), a man of low station in mid-19th century America who, via a cunning fraud, manages to buy a building that he turns into a museum of curiosities. With attendance poor, he adds a floor show featuring acrobatics and freaks. It’s slated by the critics, but curious audiences flock en masse. Barnum is suddenly a massive success — but at what cost to his personal life?

Well, virtually none, because there’s barely any jeopardy to be found here (apart from a little forced something to push it into a third act). But jeopardy is not the point of The Greatest Showman, which is all about being a crowd-pleasing a good time — like the show-within-the-show, it was poorly received by critics but a huge word-of-mouth success: it never made it to #1 at the US box office, but nonetheless stayed in the top ten for 11 weeks and earned $434 million worldwide; it’s soundtrack album was such a hit that they’ve already released another album of cover versions. It’s a phenomenon, basically, and I do think the lack of worry or tension in the story is a contributing factor, especially in these troubling times. That kind of lightweightness doesn’t please the critically-minded, but it doesn’t bother those simply after a good time. And why should it? 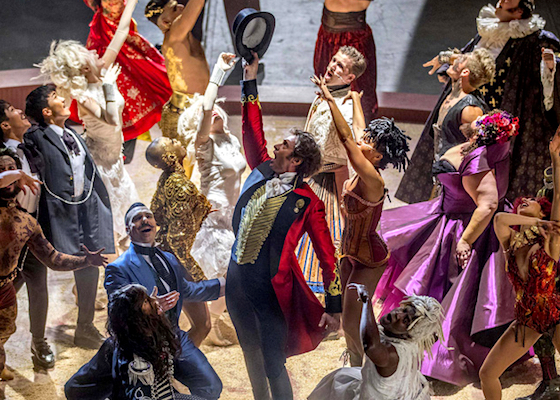 It’s a Musical through and through, the movie equivalent of a broad stage grin and jazz hands. The numbers are of a different ilk to traditional Broadway style, but not misplaced — it’s modern chart-pop style songs and music video choreography, wrapped up in a big showy old-school musical vibe. I know everyone’s latched onto This Is Me as the film’s anthem, and Rewrite the Stars earned a single release because it’s a pop love song sung by kid-friendly Zac Efron and Zendaya, but the one number that really works for me is opener/closer The Greatest Show (it’s even better on the soundtrack, because it isn’t awkwardly sliced in two with the rest of the movie shoved in between, as it is on screen). If that song doesn’t end up being co-opted for opening ceremonies and things like that, it’ll be kind of a shame. And if I was to point to a runner-up favourite, I’d go for The Other Side purely for how its staged: a barroom duet between Jackman and Efron with impressive drinkography. And talking of the songs, the Honest Trailer contains some excellent spoofs of them.

Still probably best known as surly superhero Wolverine, Jackman was an established musical theatre star before his big-screen breakthrough, so this stuff is very much within his skill set — indeed, as his recently-announced world tour could attest, this show of song and dance may be more in his comfort zone than the superhero shenanigans. Either way, that he’s so effortlessly consummate at both proves he’s a performer of underestimated range. Less remarkable as allrounders are former Disney brats Efron (as a bored rich kid roped into Barnum’s enterprise) and Zendaya (whose qualifier for a freakshow seems to be that she’s somewhat dark skinned), but they’re perfectly adequate for their poppy against-all-odds romantic subplot. Less at home is Michelle Williams — not that she’s bad, but seeing her smiling and happy is weird…

Altogether, I can see why The Greatest Showman was unpopular with critics but a huge hit with audiences — it’s a proper crowd-pleaser; a big, cheesy, easy extravaganza, similar to its pop-style music. That’s not the sort of thing critics are enamoured of, but it is the kind of thing that tickles the fancy of the masses. On the whole, it didn’t appeal to me — there were things it could’ve done better without betraying what it was aiming for, I think, like that total lack of risk in the plot, but also things I was never going to like, such as the music style — but it did have its moments.

The Greatest Showman will be available on Sky Cinema from midnight tonight.