A gaggle of famed detectives are summoned to a remote mansion to solve a murder in this detective spoof by playwright Neil Simon. The twist is, all the characters are spoofs of famous literary/film/TV ‘tecs. Also, that the murder hasn’t happened yet. And also, that the person inviting them is Truman Capote. Not “someone playing Truman Capote”, but “Truman Capote playing someone”.

A comedy where a bunch of people are invited to a remote mansion to solve a murder? Yes, it does sound an awful lot like Clue. Indeed, based on my reading, almost all modern assessments of the film seem to boil down to two straightforward alternatives: “it’s not as good as Clue” or “it’s better than Clue”. As it pre-dates Clue by almost a decade, maybe that shouldn’t be our only point of reference? Still, I guess the ’80s-ness and name-y cast of the later film has helped it gain more traction — it certainly seems to be on TV regularly, whereas I only learnt of Murder by Death as a footnote when reading up on the Thin Man series.

For what it’s worth, I think its quality is about level with Clue. Such appreciation may partly depend on one’s familiarity with the characters being spoofed, however: it’s a funny story in and of itself, but a fair dollop of the humour revolves around riffs on the personalities, quirks, and storytelling tropes of Nick & Nora Charles, Poirot, Miss Marple, Sam Spade, and Charlie Chan, whereas Clue requires, at most, that you know the icons from Cluedo.

I said Clue has a namier cast, but Murder by Death is no slouch, including Maggie Smith, David Niven, Peter Falk, and Alec Guinness as a blind butler, an affliction that’s mined for all its comedic value (and then some). They all give great comic performances, as does 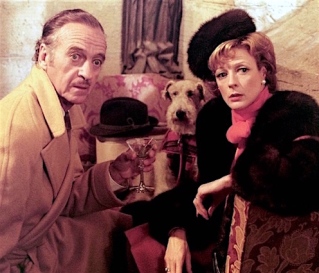 James Coco as the film’s version of Poirot. There are some neat send-ups of the genre — the literally-impossible mysteries and all that — as well as some good old-fashioned wordplay and silliness. The only downside is it loses its way a bit by the end. I suppose it doesn’t strictly need a satisfactory conclusion to the mystery, because it’s only a spoof ‘n’ all, but I feel like it would’ve benefitted from a stronger finale nonetheless.

However, it’s a consistently amusing film, and everyone involved seems to be having a whale of a time. It’s definitely worth seeking out for fans of detective fiction who don’t mind the genre being gently ribbed.